Final Versions For Samsung Galaxy S7 And Galaxy S7 Edge Leak In Cornucopia Of Images; Simplistic Changes On Board

Things are expected to come to a nice conclusion for the Android world tomorrow, with the pending launches of Samsung's Galaxy S7 and Galaxy S7 Edge. Not only will both the devices be the first Android flagships for 2016, they'll also mark the launch of Qualcomm's Snapdragon 820; the US chipmaking giant's successor to the Snapdragon 810, which failed to make it on last year's Galaxy S6/S6 Edge.

When it comes to both of the devices due from the Korean manufacturer tomorrow, Samsung's Galaxy S7 and Galaxy S7 Edge will be coming with little secrets. Critical details about the devices, such as its processor have been long rumored. In fact, we've not only been hearing about the Snapdragon 820, but also about the close relationship of both the companies in developing the processor.

Visual and design details of the devices have also started to make recent appearance; perhaps in congruence with the little changes expected on the flagship(s) this year. The numerous leaks so far suggest that both the Samsung Galaxy S7 and the Galaxy S7 Edge will not be paying great attention to design details. Instead, Samsung's expected to build on it's 2015 launches and give a more balanced focus to both the hardware specifications and performance features of the devices. 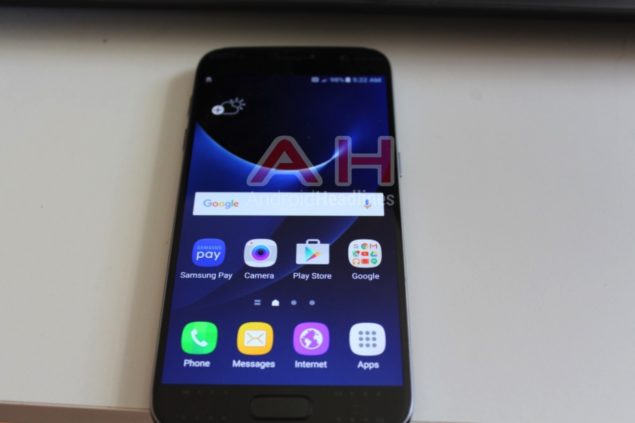 That being said, today we've managed to get our hands on what some can consider a treasure trove of images showing both the Galaxy S7 and the Galaxy S7 Edge. Compared to some earlier leaks, today's devices seem to be final versions of the flagship, which shouldn't be surprising since Samsung's all set to make its announcements tomorrow.

Compared to last year's Galaxy S lineup, the Galaxy S7 and the Galaxy S7 Edge do appear to have a more refined appearance. Taking a look at the front of the devices in the images above, Samsung's blended the fingerprint sensor and earphone with the front. In addition to this, the curves of both the devices in comparison with their edges are also more fluid, which could end up with ergonomic benefits.

In addition to design details, today's images also offer some dimensional details of the Galaxy S7 and the Galaxy S7 Edge. Given its alleged minimal attention to aesthetics, Samsung's also not expected to tinker around in dimensional terms. Taking a look at the heights of the pair, this turns out be true, with both device lying in the ballpark of 5.5 inches.

The Galaxy S7 Edge once again appears to be the larger of both the devices, though by a small margin. Moving towards the bottom, we see the speaker grille and the USB/earphone ports from the right. The Galaxy S7 Edge appears to be the better designed device out of the two, though of course final judgement rests on personal preferences. Side curves blend in efficiently with the structural frame for both the devices, as can be seen below.

There's virtually no change at the bottom of the devices, with not only the ports/grille appearing in the same order, but the arrangement of the antenna bands being similar as well. Move towards the side of the phone and you'll see the power button make it to the right in addition to the volume buttons making it to the left. This minimal approach works rather well for the Galaxy S7 Edge partly due to the curved screen which gives the appearance of a slim form factor.

The rear camera for the pair also stays consistent with previous leaks, as we see that the rear bump which users have come to dislike in general almost done away with. The sensor is also different from what was found on the Galaxy S6 and the Galaxy S6 Edge, so all that talk about different resolutions, sensors and software might also bear fruit after all.

Given the general apathy towards design, Samsung's going to need one central feature for the Galaxy S7 pair and aside from the Snapdragon 820, an improved camera can do the trick for the Korean manufacturer.

That marks the end of today's complete leak of Samsung's Galaxy S7 and Galaxy S7 Edge. Heading towards the Korean manufacturer's highly anticipated launch event expected to take place tomorrow, we have a fair idea of what to expect in terms of aesthetics. All the leaks and rumors taking place over the months have raised the bar even higher for Samsung to surprise us.

Will the company manage to succeed or simply launch yet another great smartphone that we've been used to see it do for quite a while? We'll let you know soon. Till then, stay tuned and let us know what you think in the comments section below.