We get to see some nice improvements under the hood, coupled with the much awaited look at the Snapdragon 820 and the new Dual Pixel sensor that Samsung's introduced. So take a look below to find out more.

Perhaps the most important upgrade on this year's Korean flagship smartphone launches has been the camera upgrades introduced by Samsung. The Galaxy S lineup has traditionally seen a methodical increase in specifications on paper, but this time round with the Galaxy S7 and the Galaxy S7 Edge, Samsung finally seems to be taking a more focused approach on its devices.

The rear camera is one such feature that's seen some detailed thought this time around, with the Galaxy S7's rear camera being one of the best in the market out there, according to specifications and features. You can take a look at the camera sensor above, and it looks to have been manufactured by Sony, at least according to the company's logo on a flex cable.

The Galaxy S7's rear camera comes with Dual Pixel Autofocus on board, which is expected to improve things, specially in low light scenarios. Samsung's also increased the pixel size this time around, and the Dual Pixel system on board the Galaxy S7 uses all of its pixels for autofocus. This, combined with the increased pixel size mentioned earlier will improve both detail and overall composition of images quite significantly; we hope.

We also get to take a much awaited look at the Snapdragon 820 in the flesh (or in the silicon). You don't get to take a direct look at Qualcomm's offering on first glance, as folks over at Chipworks are keen to tell us. What you can take a look at on the Galaxy S7 Edge's motherboard is Hynix's 4 GB LPDDR4 SDRAM. Under the RAM is the Snapdragon 820, in a standard package-on-package implementation.

When we talk about minute changes coming on the Galaxy S7 and the Galaxy S7 Edge, these are exactly the type of features we mean. Courtesy of watercooling making it on board the device, the resulting temperature spikes should be dealt with quite efficiently. The Samsung Galaxy S7 uses a bare minimum thermal spreader which works similarly to how you'd expect on a desktop PC. Its a nice introduction to the smartphone world, and Samsung gets top points for creativity. 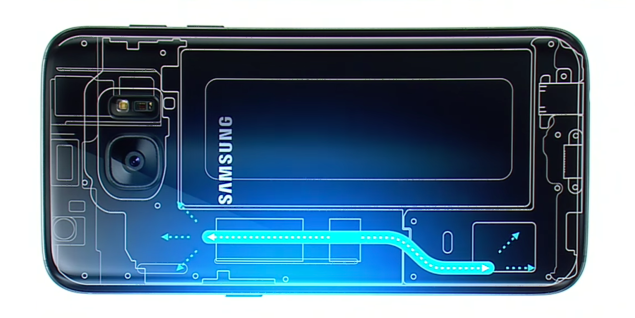 Remove the memory from the top and you finally get to take a much awaited look at the Snapdragon 820; a processor that's expected to reverse Qualcomm's ill fortunes in the flagship mobile processor market. 2015 saw the US manufacturer face some infamous throttling issues on the Snapdragon 810, leading to several manufacturers, including Samsung to skip the processor on their top tier mobile smartphones.

With the Snapdragon 820, we see the company introduce its custom Kryo cores in two clusters, with each cluster coming with 2 cores. These clusters are clocked at 1.6 and 2.2 GHz. Other details about the processor aren't known right now, but an interesting fact which Chipworks has discovered is that the space between the top and the bottom packages sees larger solder bumps.

Given the PoP design, its likely that Samsung's done this to manage heat more efficiently, as such an issue particularly on the Snapdragon 820 won't do well for either the Korean manufacturing giant or Qualcomm.

That marks our end of the Samsung Galaxy S7 Edge's teardown. As the device(s) slowly start to roll out, more interesting features and details will surely surface as well. We're impressed by the amount of detail that is present in this year's Galaxy S launch, and Samsung's approach is starting to refine much more in terms of a holistic approach.

Final Versions For Samsung Galaxy S7 And Galaxy S7 Edge Leak In Cornucopia Of Images; Simplistic Changes On Board