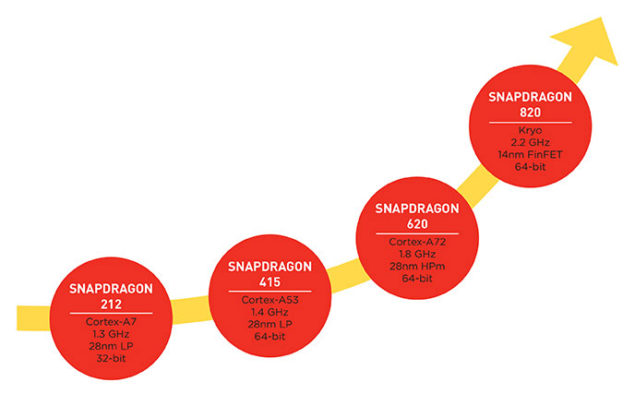 Following the principles of heteregenous compute, Qualcomm elaborates that the Kryo cores on the Snapdragon 820 will be tightly integrated with the GPU and DSP, but that's not the interesting bit of today's revelation. The Snapdragon 820 seems to be returning to the past, and Qualcomm will be employing Krait as the micro-architecture of its processor.

Its important to note here that the Snapdragon 810 abandoned Krait in favor of ARM's big.LITTLE, and looks like Qualcomm's choosing to stick to what it knows. The company's earlier SoCs came with two or four Krait cores and were able to feature in nearly every top tier device out there. Big.LITTLE's poor power management and the subsequent throttling of A57 cores on the Snapdragon 810 form a major part of its downfall after all.

The results of this change, and the subsequent introduction of Kryo cores on the Snapdragon 820 have made for some important gains on the processor. According to Qualcomm, the processor manages to gain 2x performance and power improvements over the Snapdragon 810, which itself is a power house - throttling issues notwithstanding. The Kryo cores will also be able to reach top frequencies of 2.2 GHz, which for Qualcomm's first 64 bit custom core designs are quite impressive indeed.

Also, Kryo will be manufactured on Samsung's 14nm FinFET process, which effectively removes TSMC from the equation. Things are changing in the mobile hardware world and looks like TSMC might finally be loosing its crown. Samsung's been toe to toe with the manufacturer owing to its advanced manufacturing process, which several now claim is closely resembled on TSMC's model. Other technical details such as whether the process is LPP or LPE aren't known for now, but we should expect more details to surface in the future for sure.

With the Snapdragon 820, Qualcomm seems to be showing an increasing interest in Heterogeneous computing as well, and we see this further strengthened by the introduction of another feature for the processor - Symphony System Manager. With Symphony, Qualcomm claims that the Snapdragon 820 will be able to effectively utilize different combinations of key cores and components of the Snapdragon 820 on a case to case based. Smells increasingly heterogeneous to us and we wouldn't be that much surprised if Qualcomm goes all the way.

That's all that we've got on the Snapdragon 820's Kryo cores for now folks. Now that the three pieces of the puzzle - the GPU, DSP and Kryo have been given, stay tuned for our initial look on the Snapdragon 820 as a complete SoC. Until then, let us know what you think in the comments section below.