Since its only a couple of weeks left until we get to take a look at the Samsung Galaxy S7, things must be finalized for the device over at the company's headquarters. We've been seeing quite a lot of information surface about the device over the past couple of months, and today some benchmarks of T-Mobile's Samsung Galaxy S7 have surfaced, which don't paint a disappointing picture either. 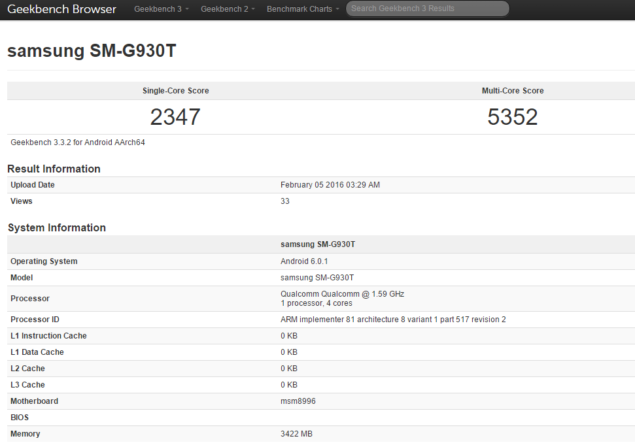 We've seen several alleged benchmark leaks of the Samsung Galaxy S7 surface already, and they've managed to paint a mixture picture when it comes to the upcoming device. The Samsung Galaxy S7 is expected to come with Qualcomm's Snapdragon 820 and Samsung's Exynos 8890 on board, with both the chipsets expected to set the bar for smartphone performance in 2016.

Given the benchmark leaks however, we were left a bit skeptical about the upcoming device's performance. The scores shown failed to catch up to those achieved by both Samsung and Qualcomm's reference devices, so if anything, the leaks were an indicator that there were still things that needed working out on the Samsung Galaxy S7. However, today's scores paint a better picture, with the Galaxy S7 scoring 2357 and 5352 in single and multi-core tests respectively.

What's even more is that taking a look additional T-Mobile Samsung Galaxy S7 benchmarks, we see that performance on an average does seem to be improving on the device. Today's listing of the Samsung Galaxy S7 comes with Qualcomm's Snapdragon 820 topped out at 1.59GHz and 4 GB of RAM on board. So in all likelihood, Samsung seems to be moving forward with the device's performance optimization.

Apart from the Snapdragon 820 and the Exynos 8890, the Samsung Galaxy S7 is also expected to come with a 12MP, Dual Photo-diode camera sensor on board, some new multimedia features and hardware, a micro-SD slot, a 3000mAh battery and design upgrades that should help it do quite well in today's smartphone world. It's also expected to be coming with some intricate design changes on board, with Samsung's major focus expected to be on performance this year around.

We're eager to see how the Korean tech giant changes things in a world where consumer demands increase as the day passes. Things should be clear in less than 2 weeks however, so stay tuned and let us know what you think in the comments section below. We'll keep you updated as this develops.