We have already seen many benchmark tests of the currently-leading smartphones. However, today comes a new twist to this comparison game. Samsung Galaxy S6, iPhone 6, HTC One M9, and the Google Nexus 6 are tested for their performance and stability when playing heavy games like GTA Sandreas and the likes. Here are the details and results. 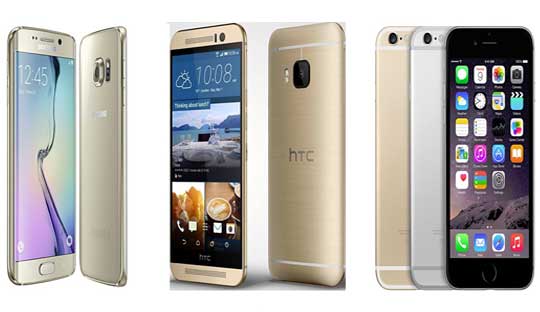 Samsung Galaxy S6 vs iPhone 6 vs HTC One M9 vs Nexus 6 benchmarks:

Folks at Phonearena have reported these benchmark results - calling it a Mexian standoff - comparing all the leading smartphones of Android and iOS world and putting them to test with very heavy gaming loads. These benchmark results come through GameBench who have scored the devices' frame rate count when running the same games on the same levels.

However, these results aren't really clear in terms of how you should trust these as the pros or cons of the particular device. As the folks at GameBench are themselves saying that even though some devices could do a better frame rate, they are artificially capped at 30 FPS which is true for the Galaxy S6. Another point why this frame rate could have differed is also how game developers tweak their games for Android as they have to ensure that the game runs smoothly on a wide array of devices.

In any case, here are the details and scores of the Galaxy S6 vs iPhone 6 vs HTC One M9 and Nexus 6 gaming benchmarks:

Apple iPhone 6 proves the smoothest, and achieves an average median FPS of 42, followed by the Galaxy S6 (36 FPS), the One M9 (34 FPS), and the Nexus 6 (34 FPS). This means that, in the case of the iPhone 6, 42 FPS was the commonest rate at which games ran. Another important metric, FPS stability, tells us how often (as a % of the entire test) the device ran at a frame rate that equaled the median, or was close to it. Think of it like this: Low frame rate stability means that the game constantly cycles between low and relatively high frame rates, thus giving you the impression of choppiness. - Phone Arena

- Take a watchmaking journey with this Apple Watch teardown