In a cycle that's expected to end in three days from now, both the Samsung Galaxy S7 and the Galaxy S7 Edge have been regular features of the news; months prior to their launch. Courtesy of this information, we can speculate on what the devices from Samsung will offer this year; with the majority of upgrades expected to target performance and multimedia.

Design wise, there's expected to be little change in over all aesthetics, with Samsung expected to target the details. Today, we get to see some alleged unboxing images of the device, so take a look below to find out more.

Judging by the rate leaks and rumors have progressed when it comes to the upcoming flagship launches from Samsung, its no surprise that we get to see the device listed online for sale. As ridiculous as it might sound, that's exactly what happened in Dubai today, with online retailer Dubizzle listing the Samsung Galaxy S7 and the Galaxy S7 Edge for grabs.

While the listing has been taken down as of now, it came with its own set of images, that largely confirm what we've been hearing about the device(s) so far. The Galaxy S7 Edge sees some unboxing images surface today, complete with accessories. The box, which can be seen in the image above looks rather plain to us, and given the absence of any labels/logos in the images, could have been homemade as well. 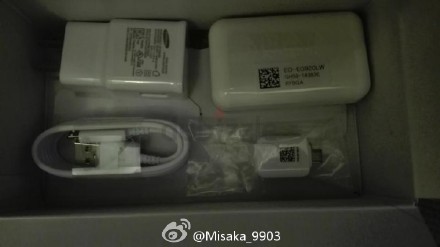 Taking a look at the alleged accessories inside the box, we find that there are no earphones, in addition to some pretty strange looking items. This device could after all be a testing/prototype version of the Galaxy S7 Edge, as Samsung's had plenty of time to work on the smartphone. Design wise, there are no changes from what we've been telling you previously.

In addition to the Galaxy S7 Edge, we also have some images of the Galaxy S7 for you today, that allow for a closer look at the device. The source of these images claims that they're authentic as well, and this time we get to see the device powered on, with the SIM/Micro SD tray removed. Dimension wise, the Galaxy S7 appears to be mostly unchanged, with no interesting details surfacing today.

One thing can be taken for certain about the upcoming launches of both the smartphones however. Nearly every image/render leak of both the Galaxy S7 and the Galaxy S7 Edge so far has show what appears to be a vastly redesigned rear camera sensor. This is once again confirmed in today's leak so we're quite interested to see what changes Samsung has planned for us in this regard.

As far as specifications go, the resolution for this sensor is expected to stand at 12MP, a tone down from last year's devices. Samsung's BRITCELL is also expected to make it on board, combined with what's been floating around as a Dual Photo-Diode camera sensor. We've also been hearing rumors of a new version of Optical Image Stabilization, so things should shape up quite nicely for camera fans this year.