With less than a month left until its launch, things have started to pick pace for Samsung's upcoming Galaxy S7 and the Galaxy S7 Edge. We've seen countless leaks about the upcoming flagship smartphone launches from Samsung so far. These include details ranging from the devices' processor to its multimedia and design specifications. Today, some more renders which show some design details have surfaced as well, so lets take a look at how different the devices will be this time around. 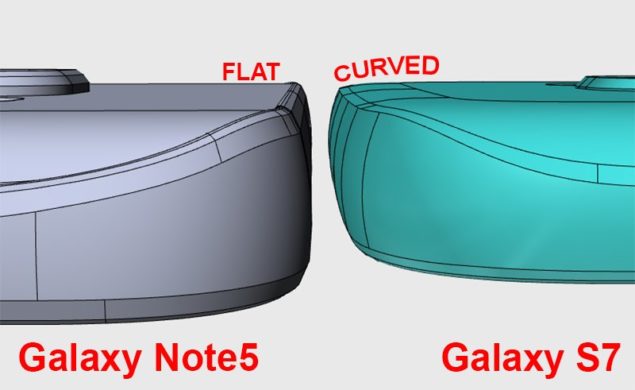 While details about the performance specifications of the Samsung Galaxy S7 have been abundant, we've seen relatively little information surface about the device's design details. The Galaxy S7 is expected to bring back the Micro SD card and come with an overall reduced thickness, but apart from this, no major changes should be expected on the device.

Today's images further end up confirming these facts but show that Samsung's taken a close look at the smartphone nevertheless. The one at the start shows an overall softer approach with the Galaxy S7 with the device shown to feature a curved top edge. Not only this, but we should also expect the Samsung Galaxy S7 to be thinner than the Galaxy Note 5 that stands at 7.6mm. The Galaxy S6 on the other hand is 6.8mm, so Samsung's got its work cut out for it.

The second image shows the Galaxy S7's rear camera sensor, and all those folks against bulging rear camera should expect refinements from Samsung's part this year around. The Galaxy S7's sensor should be expect to be more 'flat' in nature, with its height being 0.8mm, significantly less when compared to the Samsung Galaxy S6. What we're interested now is in the material details of the Samsung Galaxy S7. That should be one area where Samsung can change things significantly, without altering the smartphone's overall look.

The Galaxy S7 will be with us on February 21st, so it isn't long before things are clear officially. Information so far suggests that the company's focus will be on major performance enhancements for the device, with two new processors in tow for it. Camera specifications are also expected to receive a significant overhauls, alongside other multimedia upgrades such as new hardware. All eyes now on the Mobile World Congress in Barcelona. Stay tuned and let us know what you think in the comments section below. We'll keep you updated as more information surfaces.