The launch of the Samsung Galaxy S6 and the Samsung Galaxy S6 Edge last year came with its fair share of upgrades and features on board. Not only did both the devices come with a vastly upgraded design and form factor, but Samsung also introduced a couple of more features as well. One of these was wireless charging, a feature that has not been able to achieve mass market adoption even as of now. Well, if you're a fan of the wireless charging on last year's Galaxy S launches from the Korean manufacturer, you won't be disappointed this year either. 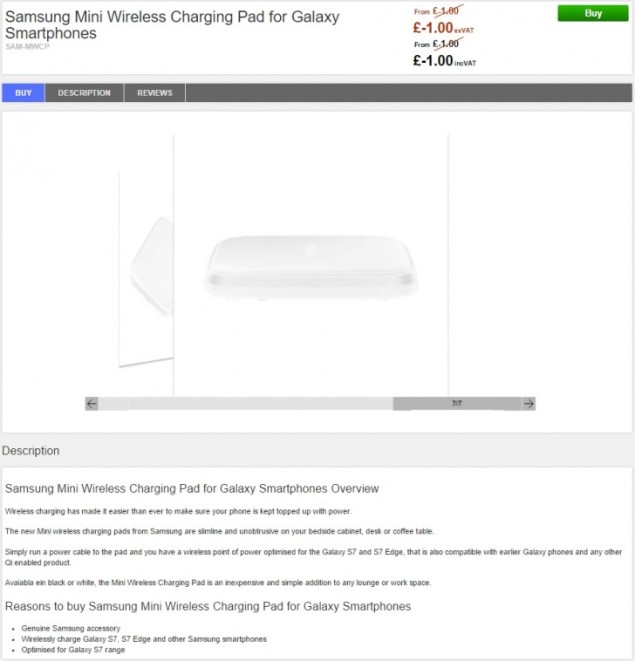 Every day we get to see a new leak about the Samsung Galaxy S7, with each piece of news providing us with new information about the upcoming devices. So far, the Galaxy S7 and the Galaxy S7 Edge are expected to come with Qualcomm's Snapdragon 820 and Samsung's Exynos 8890 on board. These will be complemented by 4GB of RAM and new features that focus towards user ease.

Battery specifications of the upcoming devices have been seeing an increased amount of attention over the past couple of days, with some mixed information surfacing. We're expecting the Galaxy S7 to come with a battery capacity of 3000 mAh, that is expected to provide video playback of up to 17 hours. Now, a wireless charger for the smartphones has also been listed by the UK retailer as you can take a look in the image above.

It's also been optimized for the Galaxy S7 range so we should most likely expect wireless charging to make it on board this year's flagship smartphone from Samsung as well. What this means for the smartphone(s)'s build materials still isn't known, but we've been hearing whispers of little changes on the Galaxy S7 and the Galaxy S7 Edge this year in terns of design and build materials with the exception of the return of MicroSD support.

All in all, Samsung's Galaxy S7 and Galaxy S7 Edge are turning out to be exactly what we'd expect from 2016's first Android flagship launches. With little than three weeks left until their launch, things should become clear soon. Till then, stay tuned and let us know what you think in the comments section below. We'll keep you updated as this develops.