As the launch date of the next Samsung Galaxy phones is nearing, the rumors are also intensifying and while the earlier bout of leaks had focused largely on the camera and display, we are now getting to hear about the other specifications too. Now, the highest-end version has been spotted on Geekbench, but it isn’t so indicative of the Galaxy S20 Ultra’s performance.

The reason we say this is because the model is probably not the final version and hence, it’s likely not optimized completely. The listing also reveals some Galaxy S20 Ultra specs such as the presence of the Qualcomm Snapdragon 865 under the hood and 12GB of RAM. The phone is running Android 10, unsurprisingly, and it will probably have One UI 2.0 on top. The Galaxy S20 Ultra, which is said to have the model number SM-G988U, will apparently only be available in the 5G configuration.

Coming to the Galaxy S20 Ultra’s performance, it achieved a single-core score of 756 and a multi-core score of 2817. These scores are much lower then what the Galaxy S20 Plus reportedly obtained, but as mentioned before, that’s probably because this is not the retail version and after the final touches, we can expect the performance to get better. Another thing to note is that why it’s rumored that all Galaxy S20 models will be treated to 12GB RAM as standard, nowhere have we seen a Galaxy S20 Ultra benchmark spotted sporting 16GB RAM, despite reports stating otherwise. 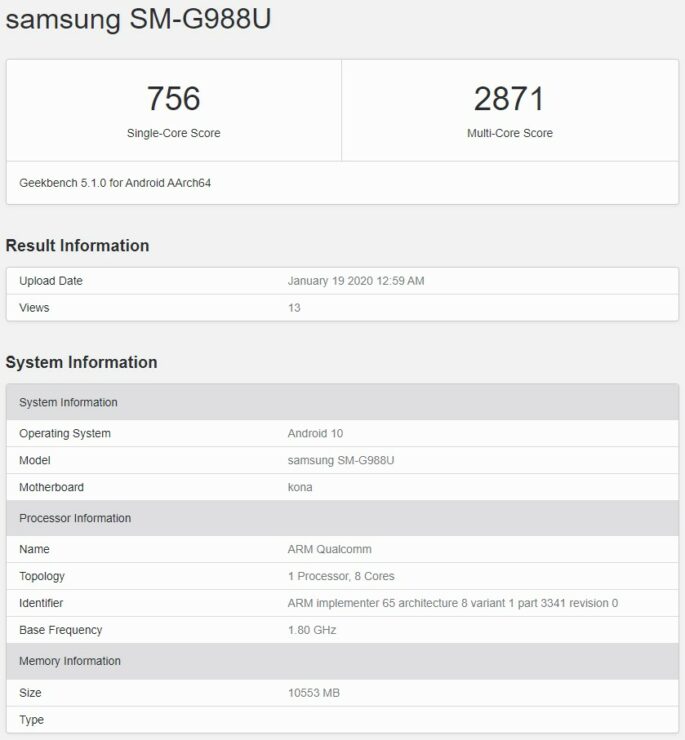 Qualcomm’s newest chipset has a 25 percent faster CPU than the silicon inside the Galaxy S10 family, which means the upcoming phones are bound to do better, but perhaps Samsung will still not be able to beat the Apple’s A14 Bionic’s predicted performance. However, benchmark scores are not the only determining factor and Galaxy S20 Ultra’s performance will also benefit from other things such as faster and more power-efficient LPDDR5 RAM.

The phone is tipped to come with an impressive camera system and a buttery smooth display with an embedded fingerprint scanner, and we can’t wait to see it in all its glory on February 11 during the Unpacked event. If you want to check out other information belonging to all three Galaxy S20 versions, a leaked specs sheet shows all the notable additions and changes, except for the RAM count, unfortunately.