The Galaxy S20 Ultra, despite its impressive 108MP camera, 100x Space Zoom, 120Hz refresh, and other features, has issues mainly towards the optics side of things. Users had earlier complained of autofocus problems with the flagship and though Samsung has addressed those roadblocks with software updates, there’s only so much the company can do, at least according to it. What this means is that a majority of the Galaxy S20 Ultra focusing issues cannot be resolved through firmware updates alone and it's largely due to the camera sensor hardware itself.

If you believe that future updates would resolve those pesky Galaxy S20 Ultra focusing issues, well you’ll be disappointed. According to a Samsung representative, there’s a reason why the focus 'issue' exists in the first place and it looks like no amount of software fixes will be able to eliminate the problem.

Given below is an explanation provided in Korean, but PhoneArena was kind enough to provide an English translation.

“First of all, we are sorry for the confusion about the use. The S20 Ultra model is equipped with a high-pixel image sensor, which increases the size of the sensor, resulting in a shallow depth of field and a longer focal length of 10cm or more compared to previous Samsung models. Therefore, when shooting a close object, the background may be blurred, or out of focus may occur. The focal length is determined by the lens specifications, making it difficult to correct with software. We apologize for not being able to fully explain the focal length in advance. Thank you.” 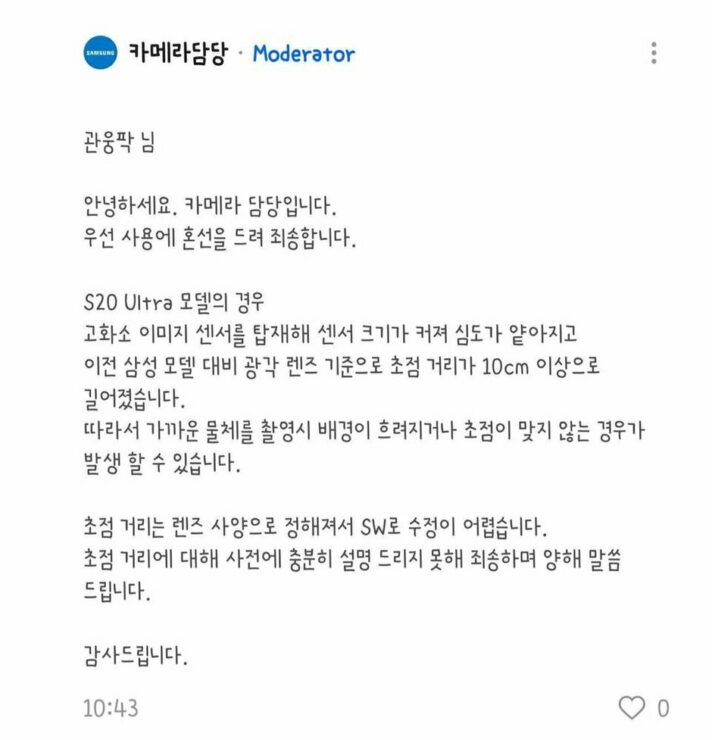 Essentially what's going on here is this: the Galaxy S20 Ultra has a very large sensor and suffers from shallower depth of field when paired with a wide aperture lens, making it an inappropriate camera for certain situations, especially closeups. For far away subjects, you'll get away without any sort of focusing issues. But if you are taking a photo of something, let's say, of your hand, then some corners will melt into bokeh, something which photographers actually crave in their photos. Is it really a problem? Maybe. Can it be fixed completely? Physics says no.

The 108MP camera sensor is the biggest in a smartphone in terms of megapixel count alone, and we can see additional uses for it in the future. However, since this is the first time Samsung is employing it in a flagship, we believe that some touch-ups will be required.