A fresh Galaxy S20 specs sheet leak has come forth, and as you’d expect from these kind of revelations, there’s a ton of information that potential customers would love to read about if they’ve made up their mind about upgrading this year. Naturally, some details are missing, but then again, there’s not much time remaining for Samsung to launch its Galaxy S20 family, as the Unpacked event is expected to be held on February 11.

Only Exynos 990, no Snapdragon 865 Mentioned in the Galaxy S20 Specs Sheet; RAM Count Isn’t Provided Either

A collaboration between Indian leakster Ishan Agarwal and MySmartPrice has brought to you a Galaxy S20 specs sheet leak. First things first, the ‘official’ model names of Samsung’s upcoming flagship line are as follows. Keep in mind, all models support 5G, and we’ve listed the display size too.

All three models get support for a 120Hz Infinity-O AMOLED screen, with its speakers tuned by known brand AKG. Before you get excited, do note that the 120Hz refresh rate for all models may not work at the maximum resolution, at least according to tipster Ice Universe. Speaking of maximum resolution, all three models will output a total of 3200 x 1440 pixels, with the Galaxy S20 5G, Galaxy S20 Plus 5G, and Galaxy S20 Ultra 5G featuring a 20:9 aspect ratio. Surprisingly, only the 7nm-based Exynos 990 is mentioned, and not the Snapdragon 865.

According to a previous report, the majority of the Galaxy S20’s shipments will feature a Snapdragon 865, most likely because Samsung has silently admitted that Qualcomm’s flagship silicon is better than the Exynos 990. Thus, it’s strange that this Galaxy S20 specs sheet didn’t mention this. It looks like a few markets will be selling the Exynos 990 version of the upcoming series, so if you know which countries will, let us know down in the comments. Next up are the cameras, and according to a tipster, this is one area which customers are going to love the most. 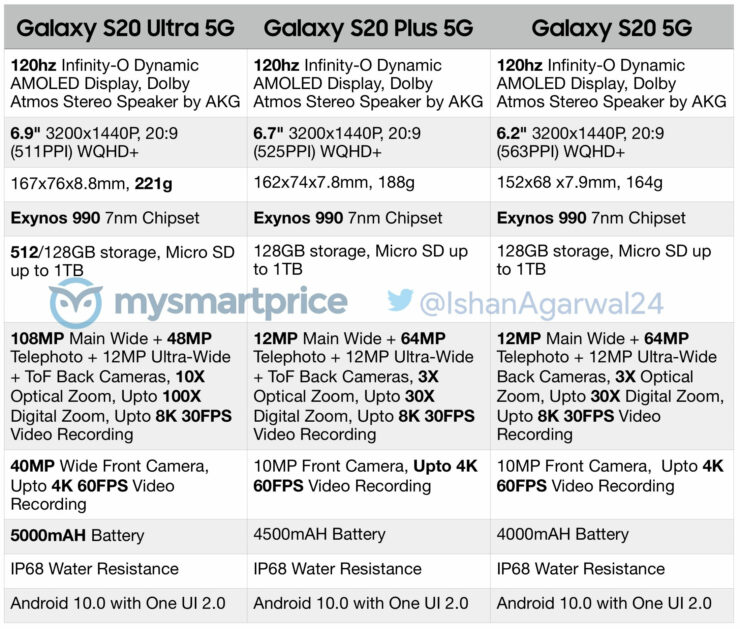 Surprisingly, the Galaxy S20 Ultra 5G does mention the presence of a 10x optical zoom lens, even though a previous report commented that this upgrade won’t be present. The reasoning? Samsung’s supplier Optrontech has already sent shipments of a 5x optical zoom camera, so despite that report, it’s good to see a different zoom number listed here. In addition, the Galaxy S20 Ultra 5G will also provide support for 100x digital zoom, with 8K 30FPS video recording support to be present for all models.

Now here’s a delightful surprise. Looks like the Galaxy S20 specs also mentions 4K 60FPS video recording support for the front camera, and that too, for all models. While a lot of people may not have use for recording footage at such resolutions, we’re happy to see Samsung providing features to keep up with the competition. As for the battery capacities, Samsung has been generous here too, with the Galaxy S20 specs sheet providing the following numbers.

All three versions also expected to ship with Android 10.0 out of the box running Samsung’s custom One UI 2.0 skin. Looking at these Galaxy S20 specs, do you think Samsung is finally giving customers access to coveted features? Let us know what you think down in the comments.