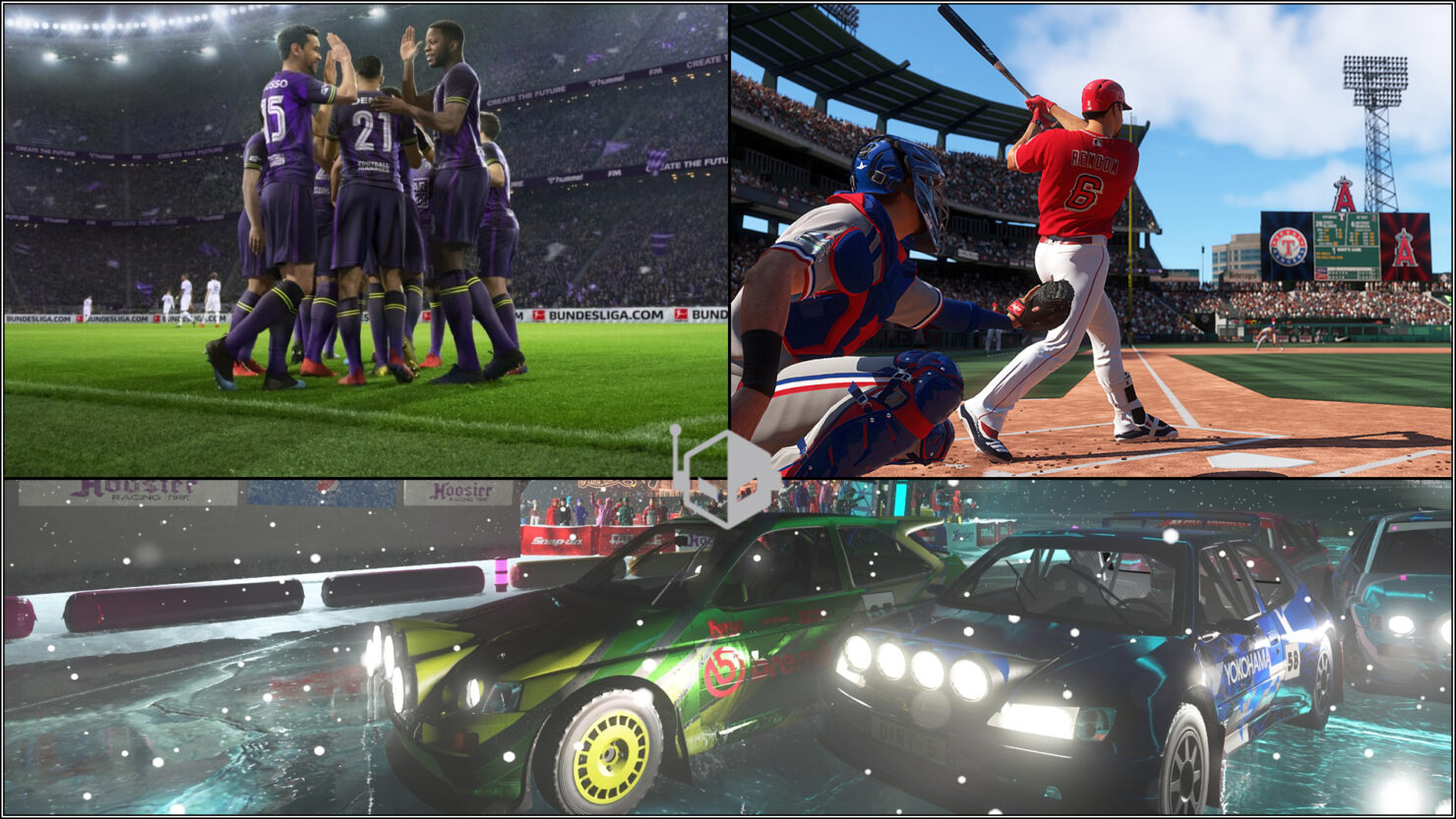 At the time of writing, Manchester United is far outperforming expectations and sit in the Premier League's second spot. So yes, Football is going well for me this year. However, Sports and motorsports, like everything, have suffered at the hands of COVID and the subsequent lockdowns, which has left 2020 as a great year for developers to fill that void with excellent sports and racing video games.

Honestly, it's a little boring writing this list up. As you could see from my list of the last decade, as well as any list of the best sports and racing games of the year, there are far too many familiar names and far too few surprises. There are some surprises like how bad the bucket of faecal matter that the WWE series of games continues to be (put your microtransactions away WWE Battlegrounds. Bad 2K) and issues with FIFA and PES that I'll cover later.

As for surprises in the positive, sadly, the outstanding Tony Hawks Pro Skater 1+2 can't be included due to it being a remake. Still, there are some standout titles with appearances from stalwarts of the genres. So, without further ado, let's look at the best sports and racing games of 2020.

One year Sports Interactive will fall into the trap seen by many annualised titles; the new version will feel like little more than an expansion pack but will be charging a full price. This year isn't the year for that. Football Manager 2021 has made even more leaps forward, with the matchday engine offering the closest simulation to football than ever before.

This is particularly thanks to the AI which lets players act and play more believably, limiting the glaring mistakes that have plagued the series in the past. Off the pitch, Football Manager 2021 offers more realism behind the scenes, giving more options in tactical decisions, transfers, player talks, and more. Some aspects are still a little repetitive, particularly the press conferences and player talks, but this is still as close to the beautiful game as you're going to get.

Football Manager 2021 is by far the closest representation to the beautiful game you can find. With an improved matchday engine, improved AI and even more datapoints than ever before, all represented in a more digestible method, making it more accessible than ever before. However, there's still no doubt that the series is still going to have a high barrier to entry, and it has some irritating issues, such as repetition in the press conferences and other interaction aspects. Issues aside, this is yet another improvement and superior entry to the series.

Codemasters has a stranglehold on the racing genre. It's a massive shame that both Take-Two and Electronic Arts are interested in Codemasters. Take-Two are the major gambling pushers in the games industry and Electronic Arts, also happy to push gambling to the masses, have made it clear that redundancies are possible following a takeover, which is always a bad omen for a company that now has three studios; Codemasters, Codemasters Cheshire and Slightly Mad Studios.

However, DIRT 5 is the first major release by Codemasters Cheshire (formerly Evolution Studios) and shows massive potential for the studio and the series. DIRT 5 offers the most arcade-like experience of the core series and differs greatly from the rally series. It looks fantastic, plays brilliantly, and offers a varied experience unlike most racing games around.

Codemasters again, only this time it's the core studio with their long-running F1 series. F1 2020 marks a large improvement to the series, with a superior on-track and off-track experience. Racing features an improved AI and enhanced handling and physics, making racing more realistic and competitive than ever before. All of this is supported by improved visuals and audio across the board.

Off of the track, the My Team mode gives you a more personalised experience than ever before. You have a team that you grow, as well as grow alongside. Formula 2 is now included with a full season, adding that route of progression, giving you the extra personalisation, and feel of progression.

F1 2020 does as much as can be expected from Codemasters, offering an outstanding racing experience on the track. Where it goes further is off of the track, bringing in an incredibly extensive My Team mode, as well as fleshing out the career mode with a full Formula 2 season. With a massive amount of content, great racing, and quality throughout, it's hard not to love the game. The only real issue I have is the inclusion of the new Podium Pass (battle pass) system, adding a microtransaction for cosmetics.

I can't honestly say I've ever been a huge fan of the US version of Rounders. Part of it is the length of time it takes, with a game taking far too long to keep me interested. However, unlike the real-life counterpart, I do enjoy baseball games. From simple flash games to mobile titles, to the MLB series. Maybe even a bit of strategy in the form of Out of the Park Baseball.

MLB The Show 20 has taken steps forward in the AI, allowing it to feel more realistic than ever before. Players will act and react more realistically, they look more realistic as well, though the game is undeniably pushing the limits of the generation. A few improvements were made to the franchise mode off of the pitch, though you can rebrand and relocate your team if wanted.

MLB The Show 20 keeps the franchise’s Cal-Ripken-like streak of solid annual releases intact without swinging for the fences. The on-field action is as satisfying as ever, but developer SIE San Diego mostly plays it safe with a series of modest gameplay tweaks and new features. A bigger shakeup is likely in store when the series goes multiplatform next year, but for now, MLB The Show 20 still touches all the bases.

Much like sports and motorsports, these genres have seen a very slow year. Usual high profile series like FIFA and PES don't even feature in this list. FIFA 21 plays decently but is essentially an expansion passed priced like a full game, the only real upgrades designed at milking more money out of people with ultimate team. At least Konami decided to shock the world by doing the right thing and creating the 2021 season update, pricing it reasonably.

Even the honourable mentions list, coming up shortly, is looking sparse. I could include games like UFC 4 and AO Tennis 2, but while decent enough, they're not good enough to make an appearance on a best-of list. As for honourable mentions, let's have a look.

I could have missed a few games from the list. It is subjective. Somebody could have really loved a game or two left off of the list, including the basketball-shaped casino that is NBA2K21. In my most anticipated list for this year, I did say that the pickings were thin; I was right. Hopefully, 2021 and the new console generation will see some major improvements in the genres. Until that time, happy new year.