This may be a spoiler to my conclusion of RIDE 4, but this game has really annoyed me at times. This isn't me saying it's a game without merit, it has positive aspects as well as negative ones. What I'm saying is that I found more elements that I disliked than the ones I liked. What I'm saying is that there are a few large things that made me make certain exclamations at my PC, such as ones that sounded like "What the mucking hell is this bull-pit" and "cluck off you ducking hunt".

So rather than me saying what I'm saying about RIDE 4, why don't I say it? That sentence makes sense.

While my anger is still simmering, let me make something abundantly clear: If I ever see another speed-trap, checkpoint laden time trial, I'm not going to be held responsible for my actions. Why? At this point, I'll have blacked out, only to reawaken wondering where all this tomato ketchup has appeared from and why it smells like metal. What am I talking about? Well, I'm talking about the career of course.

RIDE 4 contains a whole new format for the career, but I'll get onto that soon. To say that the start of this made me want to enact one of John Doe's killings in Se7en is an understatement. Frankly, the whole career is punishing to the level of being unrewarding. Maybe the severe ear infection I've been suffering from for the past few weeks is throwing me off, but I don't think it is. My balance is affected in real life, my ability to work a controller isn't. So, what exactly is my problem?

Well, at the very start of your career you have to pass a few tests. A number of these will have you going around a course featuring specific checkpoints. I've got no problem with checkpoints; it wants to see if you can keep on what the developers have designated 'the racing line'. Cool. Only you've got to hit these checkpoints at a specific speed. Less cool. If you miss the speed target, miss the checkpoint, or slightly brush against the edge of the course, you get a time penalty. Also, there's quite a rigid time limit to meet and if you don't get enough points from these starting challenges, you can't even enter the career. This is around the point my neighbours' pets start going missing.

I was wondering why the game was being so coy with the career. Surely, if the barrier for entry is so bloody annoying, it's going to be something special? Well, not really, but it improves. Improving from animal cruelty inducing levels isn't exactly an accolade and the career still has some very annoying time-trial and other alternate stages within, but it's a positive move. It should be noted that the career does also feature other special events too, with extra bonuses the more you use a particular manufacturer's bike. It adds a sense of progression not seen in older titles.

So I've said that the career takes on a new format. In older RIDE games it's been very much divided into the style of bike you're riding at the time. Now you're going geographically and in a much more understandable path forward. Start in regional leagues. Once you've earned enough trophies there, you can move to the world leagues. Eventually, you'll find yourself in the final leagues. Even though I was determined to not let RIDE 4 keep the heights of the career away from me, it's too much of a slog.

Even on the track I can't help but turn into the swear master of swear-town. RIDE 4 is better than earlier entries in the series, but it could still do with a bit of tweaking. The concerns I voiced while writing my preview of the game seem mostly remedied. The physics are still a little iffy. The slightest bump with another bike will send you flying nine out of ten times, no matter who instigated it. It's like your opposition has a form of Plot Armour. Also, l keep drifting out no matter how much I lean and match the speed of the AI. Irritating because the AI sticks to the lines like it's some sort of programmed computer that isn't quite adhering to the rules of the world.

Speaking of the AI. A lot was made by Milestone about A.N.N.A. (Artificial Neural Network Agent), the custom-built AI system by Milestone. It's meant to learn, develop and adapt as you continue racing in the game. I don't know if ANNA keeps everything it's learned over all of the races, or if it's on a per-race basis, somebody may be able to clarify that. What I do know is that ANNA needs to go back to bloody school.

The AI is far superior to that of earlier titles in the series. It has flashes of brilliance where AI racers will make realistic mistakes and the rare surprising move. This is all the more notable when the difficulty isn't turned up to the max. The AI then becomes one homogenous clump. I'm sure you're sensing a "but" here, and there is one. The AI is far superior but it's still prone to similar issues of the former titles. Even though ANNA wants to adapt, I think a little more work needs to be done because I'm still constantly getting rammed from behind, being swiped from the side and more, all from the AI wanting to stick to a rigid line.

I probably seem quite down on RIDE 4, I've said more than a few negative things so far. Honestly, I'm not. Once you get into the swing of it, the racing is the best it's been in the series. When you can get to the bloody thing that is, damn time trials, checkpoints and... let's just leave that alone. You'll have to fine-tune the settings and assists, to get it just right for you, but you're going to be able to. There are a wide variety of assists and difficulty options, so the variety is there.

On the subject of variety, let's look at the bikes, tracks and everything else on offer. At launch, there are 175 bikes for you to collect. You'll be racing these bikes on 30 tracks, offering 60 different variants across these tracks. Also, as is custom for the series of games, you have options to modify and customise your bikes. You can also customise your rider, having six different outfits slots to create.

There's also a reasonable amount of variety in the sort of racing you're going to do, it's just that it's not all fun. You've got the time trials and checkpoint based racing, made all the more annoying by the fact that the game fails you for going off track at all. On that note, I've found myself getting irritated by the game giving you a time penalty whenever you go off track. I understand that you're meant to get a penalty if going off-track and you get an advantage from it, but I've been getting penalties even when it's cost me time. Double whammy.

One thing I haven't spoken about yet is the brand new endurance races. These remind me very much of some of my favourite elements from early Gran Turismo games, the very long races that - at the time - I would do with my dad. I'd take over the controller and have a bit of time behind the wheel on an extremely long race. Here, you can have a race lasting anywhere from twenty minutes to twenty-four hours.

These longer races are more than just keeping ahead by racing well. You're going to need to keep track of your fuel consumption and tyre wear. You'll be making decisions on when to pit, what to do while you're in the pits as well. It adds a level of strategy to RIDE 4 that hasn't been seen before in the series, one that is essential in a tight race.

Milestone has made a good few steps forward, despite a few missteps along the way. There's an excellent amount of replay value with a good variety of game modes. The options and assists make it very accessible, discounting certain obnoxious events. The physics are improved, although collisions are still janky. As for the AI, ANNA could make a great platform for future AI similar to that found in Codemasters' GRID. At the moment, it's still a little too focused on the driving line, regardless of you being there already.

I suppose what I've been trying to say through all of this is that I recommend RIDE 4. I wouldn't have spent over 30 hours with the game otherwise. It's just that isn't without its flaws. Now I think it's time for me to try an endurance race longer than two hours. 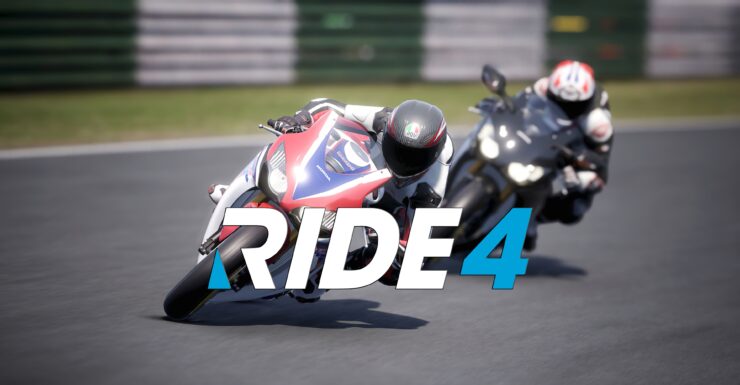 Milestone has made an undeniably solid game in the form of RIDE 4. The physics are mostly improved, though still have issues with collision. The career, while still a little too much of a slog, is far better organised than previous outings. There's a good variety of game modes to play through, giving a lot of replay variety, with the new endurance races being a high point. Some smaller race types, however, are infuriating in their rigidity and inaccessibility. The AI has been improved thanks to the new A.N.N.A. system, but it still isn't the most realistic and you'll find the computer trying to wipe you out for having the temerity of being where they want to be. For every negative, there are at least two positives, making this the most solid of Milestone's outings, I'd recommend it.