Project Cars 3 is not Project Cars 1 or 2, that much needs to be made clear right away. People will decry the franchise for losing its identity as a purist racing simulation and honestly, they wouldn't be wrong. If you are coming into Project Cars 3 expecting a tough-as-nails racing simulation, you're going to be disappointed. If you're coming into this expecting a fun, fast and engaging 'simcade' racer, this could be the one for you. For those of you with no expectations, see the latter.

So, I've said it could be the one for you. Honestly, I think it will be the one for you. Project Cars 3 is fun, fast-paced and an incredibly accessible racing game. It has deviated from what people are used to. It really is suffering from an identity crisis big enough to match that of Frank Abagnale in Catch Me if You Can but I'm not going to complain about it. I like what I've been playing.

During my preview of Project Cars 3, I spoke about the handling of the cars, how the game, in general, handles thanks to overhauled controls and the aforementioned accessibility. I spoke about how this game is something special, that it feels fantastic and that - at the time - I thought I would feel tied down due to my reviews of earlier Project Cars titles. A lot of this still applies, though I can't say I feel as tied down as I thought I would be.

So the handling I commented in the demo still applies. Project Cars has never felt this responsive or as smooth thanks to the overhauled controls. Even with the assists turned off, or at a very low setting, you're going to find that you now have the ability to catch yourself from almost any mistake before it's completely unrecoverable or before you're having a picnic in the grass or dirt at the side of the track. It's forgiving no matter which car you're in, each of them still feeling different and showing the attention to detail that Slightly Mad Studios are known for.

If I were to generalise, I'd say that this actually feels more like how Gran Turismo used to feel, back when it was the king of all racing games. The feel of each and every car feels fine-tuned, it's perfectly balanced and a joy to sit behind the wheel of even the slowest of vehicles in the game. Each of these can also be upgraded in multiple ways, as well as unlocking the ability to tweak the transmission, differential, suspension and so much more. It's what you've come to expect in a game like this and it delivers.

Each and every upgrade, or removal, adds and subtracts to a rating number of your car which is very similar to that found in Forza games. It offers you a lot of option to upgrade your Mitsubishi Lancer Evo VI right from a road class E, right up to being a hypercar, finishing it off with a race conversion. Each car has its natural limits, so you'll move on eventually, but it does mean that you can stick with your favourite cars for longer without having to re-do the same career races over and over again. It's a great system that I always appreciate, made even better by the sheer number of cars in the game.

Now, if only this system, as well as the campaign, was as balanced as the handing and feel of the cars. As great as the option is to stick with and upgrade your preferred cars, it's also great to build up a huge garage at your disposal. This should be the real focus since Project Cars 3 has over two-hundred different cars in the game, all fantastically modelled with a huge amount of detail. Sadly, the career doesn't seem to want you to get the cars quickly enough, with monetary rewards being a little too stringent. At least when you're looking at the prices of the cars, particularly the ones you want.

Speaking of rewards. While the game is too stringent in rewarding credits to let you buy new cars, it loves rewarding you with experience. Experience for your profile, unlocking more cars as you level up, as well as experience for your car which reduces the price of upgrades. The fact that upgrades can be reduced by quite a significant amount also means you'll tend to stick to the same car as much as you can. Again, I don't get a racing game that tries it's best to keep you in the same car when it has so many outstanding vehicles on offer.

Things so improve as you advance through the campaign, though progression can be a pain in the arse - even though it is fun. There's nothing truly competitive in the first third of the career, and that's being generous. You can pump up your first car and you may be forced to buy maybe a maximum of five other cars to meet specific requirements, everything else covered by the upgrading. Everything that early is a case of blasting past the opposition thanks to some min-maxing of your stats, the only challenge is to get all three... stars? medals? - whatever they are - which is a pain in the arse on the hot lap, pacesetter and breakout modes.

The only reason some of these are a challenge is through some stupidly stringent rules. For example, in pacesetter, you go around the track three times and set an average pace. However, you leave the track just once or if you hit the wall with more force than a mosquito's thrust, the lap time is invalid. This applies to every race, but here, one invalid lap time is a failure and you may as well just pause and restart. I can't understand a game that has become as approachable and lenient in the racing having such a hard line in place, particularly as you need to complete these events to advance in your career.

Before I go on, I want to talk about some of the details that have been removed from Project Cars 3. First and foremost, any tactical nuance has been taken out of longer races thanks to fuel amount and tyre durability having been left in the pits. For that matter, there are no qualifying or practice sessions, there's no preparation for an event. Start it, tune your car, off you go. The restart button can essentially make your current race a practice if you want it to, but the missing features are notable.

There are a few other missing elements that fit in with the whole simcade experience. Crashes don't result in the damage you'd expect to see. Indeed, the visual effects just seem lacking when it comes to cars scraping against each other, crashing into a wall and anything along those lines. It seems par for the course since the game has gone for the simcade style. The weather conditions, the impact on the track and the tracks all look as good as the impact they have on the car.

All things considered, I can't help but enjoy Project Cars 3. I can't deny the fact that the game has lost its identity, shedding the simulation racer skin, but I won't complain about that in the slightest. There's a hell of a lot to do here, a massive career - even though the start is dull - and a huge number of tracks spanning the globe to race on. Will this pivot be the right move for Slightly Mad, appealing to a wider audience? Only time will tell, but I certainly recommend anybody who wants a good racing game to pick this up. 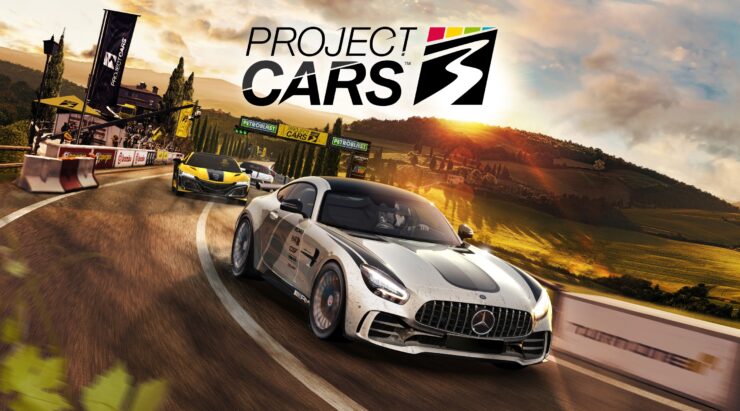 Project Cars 3 is going to annoy some people and I completely understand why. This is a huge deviation from the series that people are aware of, it honestly is like the series has lost its identity. However, this doesn't mean it's a bad game. An undeniably less sim-like experience, this is infinitely more accessible than earlier Project Cars titles and it doesn't completely drop the elements that made the series great, featuring a massive number of cars and tracks with a huge amount of customisation and detail throughout. It isn't without flaws, such as the first third of the campaign, but the pros far outweigh the cons and this is, simply, a very fun game.