Realistic skateboarding games have been all the rage of recent years, from EA’s long-running Skate series to the Early Access release of Skater XL that graced PC not too long ago. But, just as there’s an arcade-y, exaggerated of nearly every other sports discipline on the market, so too is there something for the world of skateboarding. For two decades now, that has been the Tony Hawk series. The Birdman hasn’t had the best of luck with recent releases, from the HD Remix that failed to capture critical and fan acclaim to the Ride series that cluttered GameStop back rooms with plastic board accessories. When I heard that Vicarious Visions and Activision were dusting off the old skate deck with a new release, I was apprehensive at first, but needless to say, there’s no reason to fear Tony Hawk’s Pro Skater 1+2.

Just about the full roster of what you remember from the first two Tony Hawk’s Pro Skater titles are available in this fully remade package. That includes Goldfinger’s Superman, Bucky Lasek, School and School II, the 900 special trick, and more. When it comes to picking your skater, you have around twenty pro skaters at your disposal, from the original cast of the first two THPS titles as well as a number of new skaters like Leticia Bufoni and Nyjah Huston. As for what didn’t make the cut? Well, you’re looking at three songs that couldn’t be part of the soundtrack (but Vicarious Visions did add in thirty-seven new tracks), and Spider-Man, who would’ve been a killer exclusive on PlayStation 4 but that licensing deal was probably only made with the original Neversoft developer on PlayStation 1.

The campaign to Tony Hawk’s Pro Skater 1+2 isn’t too different from what you’d expect from the respective PlayStation 1 titles. Each title is in its own separate dropdown menu once you boot up the game, leaving the possibility open for expanding the experience with DLC from the other Pro Skater entries.

Whether you’re jumping into Tony Hawk’s Pro Skater 1 or 2 first, you’re going to have to tackle a similar set of challenges. Each level, starting from the famous Warehouse and School titles in the first game, is set up similarly to one another. Not only will players have two minutes to achieve a certain score, but there are a great number of collectibles tucked away in each stage. For the Warehouse stage, this includes collecting all five SKATE letters, a couple of stat points for your chosen skater, and smashing through five crates. Most of the collectible goals have to be achieved in a single run, so this turns THPS into a different type of two-minute experience as you run around trying to collect what you can or hit certain gaps with a specific trick.

Everything you do in the career mode, even if you don’t score enough to earn a medal in the Competition levels, feeds into a universal skater level that rewards the player with cosmetics for skater and board alike. Far more exhaustive than the individual level challenges are a great number of challenges that have the player master every trick in their arsenal, or at least use them enough (expect to hit 10,000 of each grab/lip/grind trick if you want to earn them all). There’s also an in-game item shop where players can put forth a bit of virtual cash into purchasing shoes, grip tape, and other skater essentials (again, earned by challenges. While there is paid DLC like the Call of Duty Endowment United Pack and Digital Deluxe Upgrade, there isn’t much else to spend real world currency on in Tony Hawk’s Pro Skater 1+2 yet).

There’s a very specific feel to the way a board handles in the original Tony Hawk titles, from how much air you get from a flatland Ollie to the rotations of your skater once you sail off a half pipe. Needless to say, Vicarious Visions has nailed that signature feel down to an exact science and transitioning from a mid-air grab to grinding a rail and finishing it off with a combo-linking revert just feels *right*.

Not everything in Tony Hawk’s Pro Skater 1+2 is exactly the same as you might remember from the original PlayStation days but that’s an instance where this remaster exceeds the original. New to the first two Tony Hawk titles are the addition of Reverts and Manuals, both features that weren’t introduced until later games. A Revert, performed by hitting R2 once your skater lands from the air, lets them switch their stance upon hitting the ground. The other new trick, Manual, can be done by quickly tapping down then up, or up then down if you want the reverse, letting your skater glide forward on the front or rear sets of wheels. Both of these moves can be used to continue a combo chain once you hit the ground running, allowing the player to continue a combo multiplier that just gets astronomically higher as more tricks are performed.

If you want to absolutely cheat the scoring system, transition into a Manual, Grab your board twice to get into a Handstand position, then keep tapping the Flip button to repeat this simple trick that just compounds the scoring multiplier the more you pull it off. There’s a need to keep yourself balanced while performing a Manual but you can just Ollie off the ground and end the combo if you think you’re close to bailing.

There are also two additional Legacy control schemes available in Tony Hawk’s Pro Skater 1+2 but I want to use that term loosely. Neither change the fundamental controls for your skater but instead change the moveset that’s available to your skater. If you want the pure THPS1 experience, this disables some of the core features like Manuals, Reverts, Wall Plants, and a number of other features that weren’t available in the original release. THPS2 offers a similar change up to the moves but still allows for Manuals and Stance Switching (but no Reverts).

If hitting the high scores in each run is too difficult for you, or if you want to just enjoy the game at an easier pace, Tony Hawk’s Pro Skater 1+2 does offer a number of Assists in place to help you stay at peak performance. These offer the ability for perfect balance on anything that would otherwise require fumbling with the balance meters, or even the ability to never fail a trick. Once enabled, these do disable a majority of challenges and in-game achievements but consider them to be a good set of training wheels to get the feel for how to properly manipulate your board when it comes time to hit the ground running.

If the on-disc skate parks and challenges aren’t enough for you and you don’t have a buddy nearby to do some split-screen multiplayer, why not take a spin at the online offerings in Tony Hawk’s Pro Skater 1+2? There’s quite a bit of online modes to choose from, from Jams and Competitive playlists, to Combo Mambo and It. Once you're loaded into a lobby and level, you can choose stick with the same group for multiple sessions and stages, just in case you aren't feeling like jumping out after every minute or two. Strangely, my old favorite H.O.R.S.E. Is only available in local multiplayer and can’t be played online. Also, Tony Hawk’s Pro Skater 1+2 offers the full Create a Park experience that’s been a staple of the series since the second THPS. If you want to see just how dumb/awesome you can make your own Skate Park, just check out ‘Roller Coast’ on the map browser.

Tony Hawk’s Pro Skater 1+2 is the first remake I’ve played in some time that’s completely nailed the feel of the original releases while still turning the finished project into something brand new. Perhaps the closest I could come to is Bluepoint’s work with Shadow of the Colossus and other milestones in gaming achievement, but the difference is that Bluepoint does their best to make these new releases faithful to the source material. No, what Activision and Vicarious Visions have done is found a damn fine reason to bring skateboarding back in vogue for an entirely new generation of hopefuls. Consider Tony Hawk’s Pro Skater 1+2 to be the X Games of skateboarding titles. There isn’t anything else that even comes close, perhaps for a possible Vicarious Visions-led remake of the other titles in Tony Hawk’s bag of tricks. 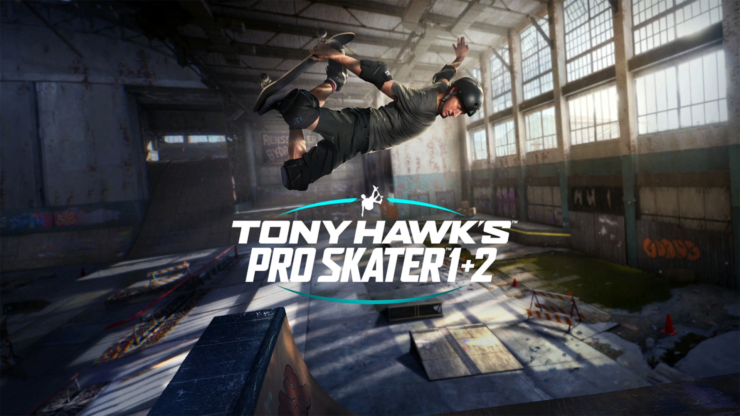 Though some of the skaters might be past their prime, Tony Hawk’s Pro Skater 1+2 is an incredible example of how some classics just never go out of style