At the time of writing this paragraph, the very first Formula One event of the 2020 calendar is about to take place at the Red Bull Ring in Austria. This is the Austrian Grand Prix. Due to the current pandemic a brand new GP, the Styrian Grand Prix, will be taking place just one week later at the Red Bull Ring in Austria. At the moment there are only eight confirmed events, taking place on just six tracks. This truncated and limited calendar presents a perfect opportunity for F1 2020 to draw people in and show its quality. Even if only to let people experience the full race calendar.

Not that experiencing the full roster of all 22 tracks is the only selling point if F1 2020. I'd argue that this is the most complete F1 experience in the series' history. This is particularly thanks to the new My Team mode, with tweaks and improvements made throughout the rest of the game only bolstering this claim. 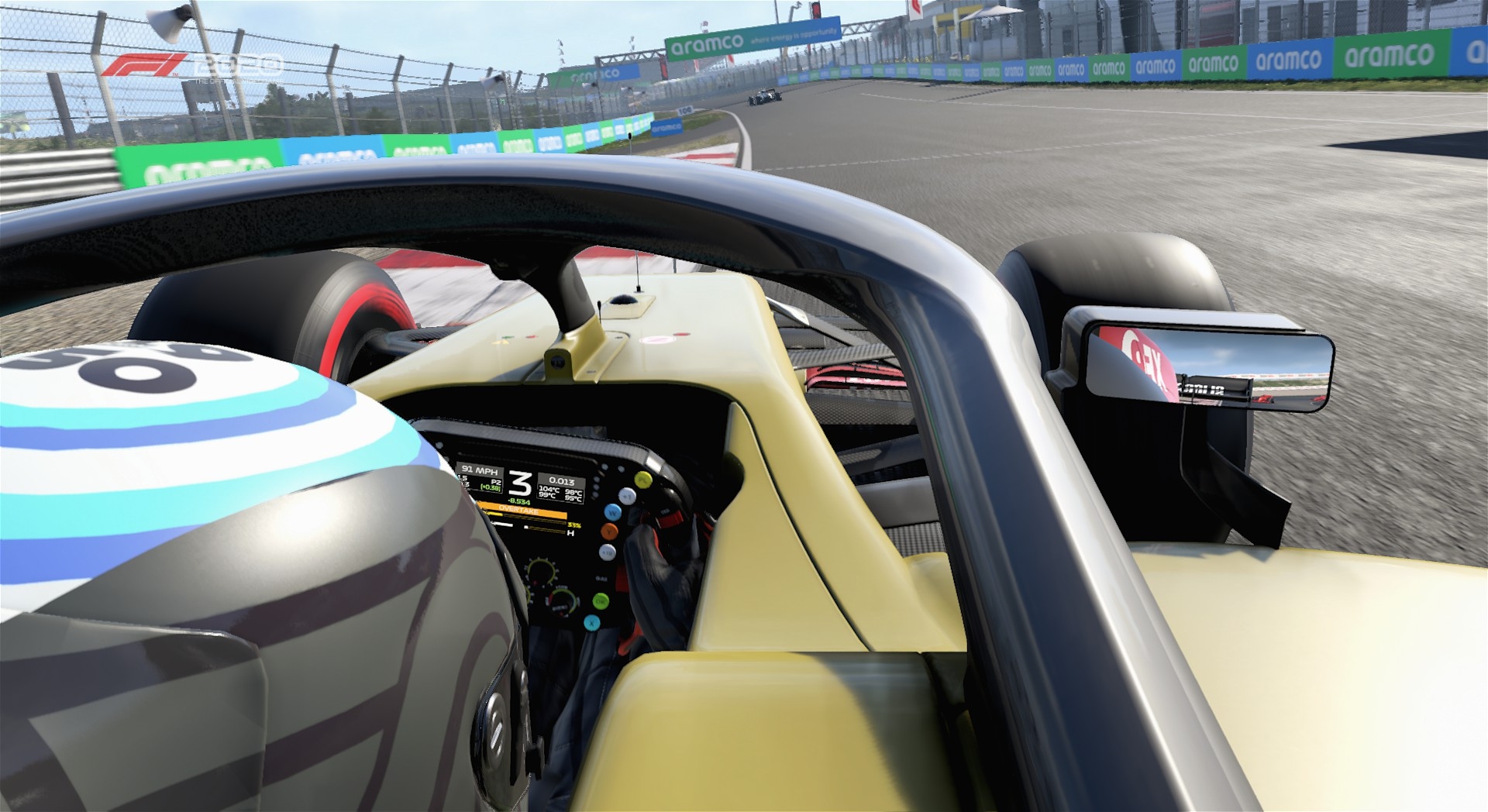 For a long time, I've been saying that Race Driver: GRID is my favourite game by Codemasters. I'm not going to argue that it's technically the best game, it isn't. Others do the racing better. What I've always loved about that game are the extensive career and team building options. It gives you a sense of ownership that other games don't seem to offer. Codemasters finally seem to have listened to be because F1 2020's new My Team mode takes on this mantle admirably.

In the new My Team mode, you have a wealth of options at your disposal as you progress from a brand new manufacturer and team, starting afresh, to hopefully becoming the top team in the world and dethroning AlphaTauri at the top of the pile. At least it's AlphaTauri I selected as the team I wanted to beat in my first season when I was asked by the press. I can't remember who I selected to be my rival, but much like in F1 2019, the rivalry system is a bit pointless.

At least they're useless in the case of having any sort of real impact on the game directly. What I have found is that when racing through My Team, much more than career or any other mode, my rival team and racer are ones that are directly impeding my progression, they are stopping me from attracting bigger sponsors, from earning more money and research points to upgrade my facilities and vehicle. These are the people stopping me from being the best even if they're not visibly acting any different to how they normally would, or anybody else for that matter.

The simple fact is that in addition to the points you would normally get in the rankings, the better you do in a race, the more acclaim, money and research points you're going to get. This directly links back into the other aspects of My Team, letting you attract a better second driver, letting you improve your facilities, improve your car and - most of all - stop your crew being miserable gits. 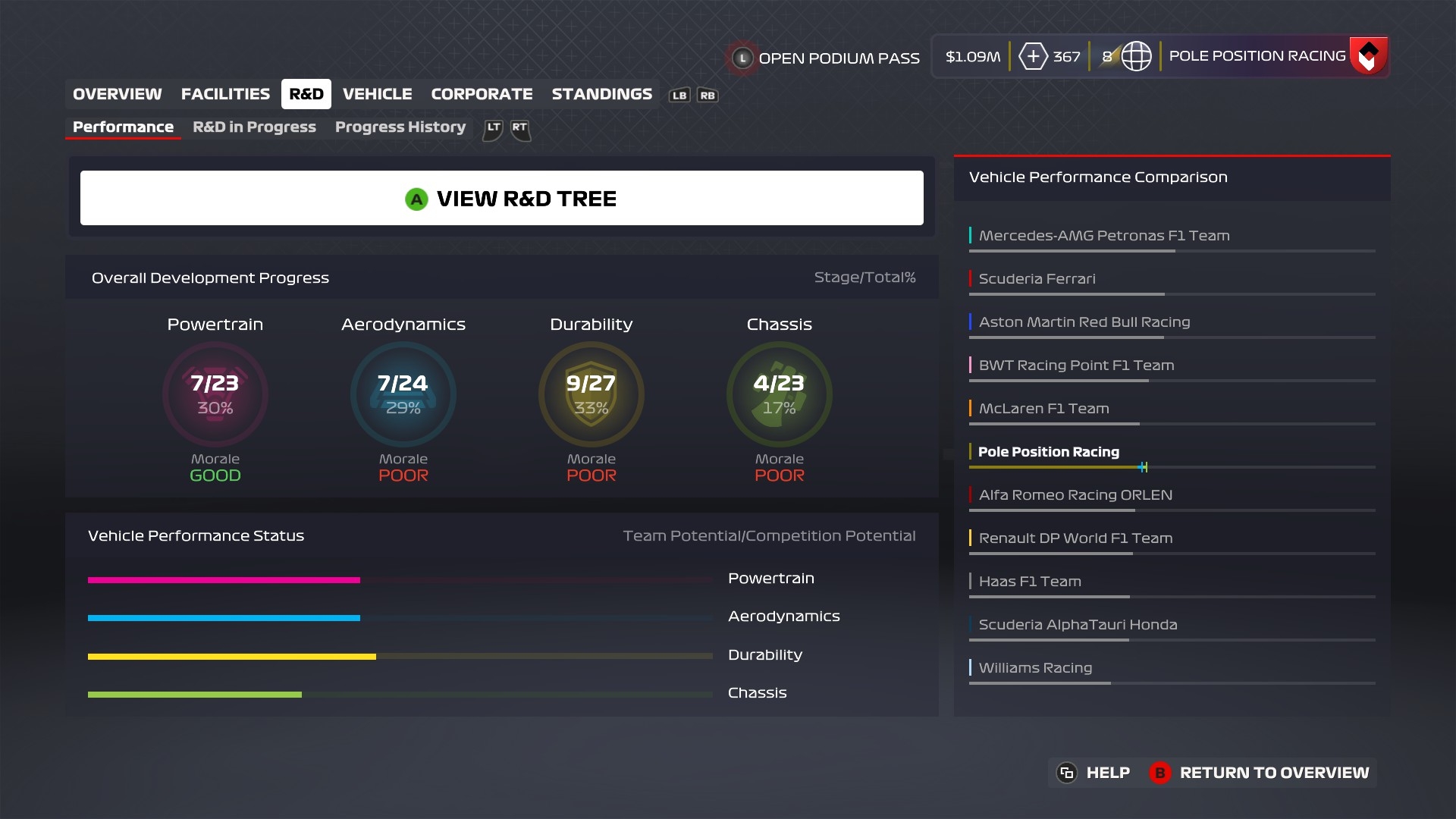 More on My Team, because this is the biggest selling point of F1 2020. There's a lot more to balance, particularly as you work through the racing calendar. Now, all of this depends on how many GP's you want in a season, the game giving you a choice between 10, 16 and all 22 GP's. You can select the ones you want if you choose to go for a smaller season.

In between the GP's you'll be able to select several activities, each taking a set number of days, with differing costs and rewards. Sometimes it's as simple as attending an F1 eSports event, increasing your driver acclaim, to others where your second driver can train himself through weight training or you can both take part in a bit of sponsor filming, increasing your cash pile. It's a fine balancing act, particularly as other events crop up, like invitational events and press interviews.

All that is to say that there's so much to talk about in My Team, that even on a shorter season of just ten GP's - my personal choice - you'll find yourself enjoying the balancing act. This is particularly true as you head into further seasons and use the funds you've generated to select a better engine manufacturer, pushing yourself even further forward. The other aspect of this is also that you need to develop, or at least hire, a good second driver. If you don't, winning the constructors championship is a lost cause.

The shortening of a season also applies to the Driver Career mode. Interestingly, that allows you to go for a smaller season in more than one way. Before the F1 season, you can do either three Formula 2 events, a truncated season or a full season. Your performance naturally dictates the interest the Formula 1 teams have in you, giving you a better start to your true career in F1 2020.

I'm particularly happy about this because last year I was critical of how shallow the inclusion of Formula 2 felt. This, while still only taking part over a singular season, still feels like it has that true sense of progression, some meaning. I do still have some issues with the media interviews and other aspects that feel tacked on and not truly fleshed out, though they are improving. 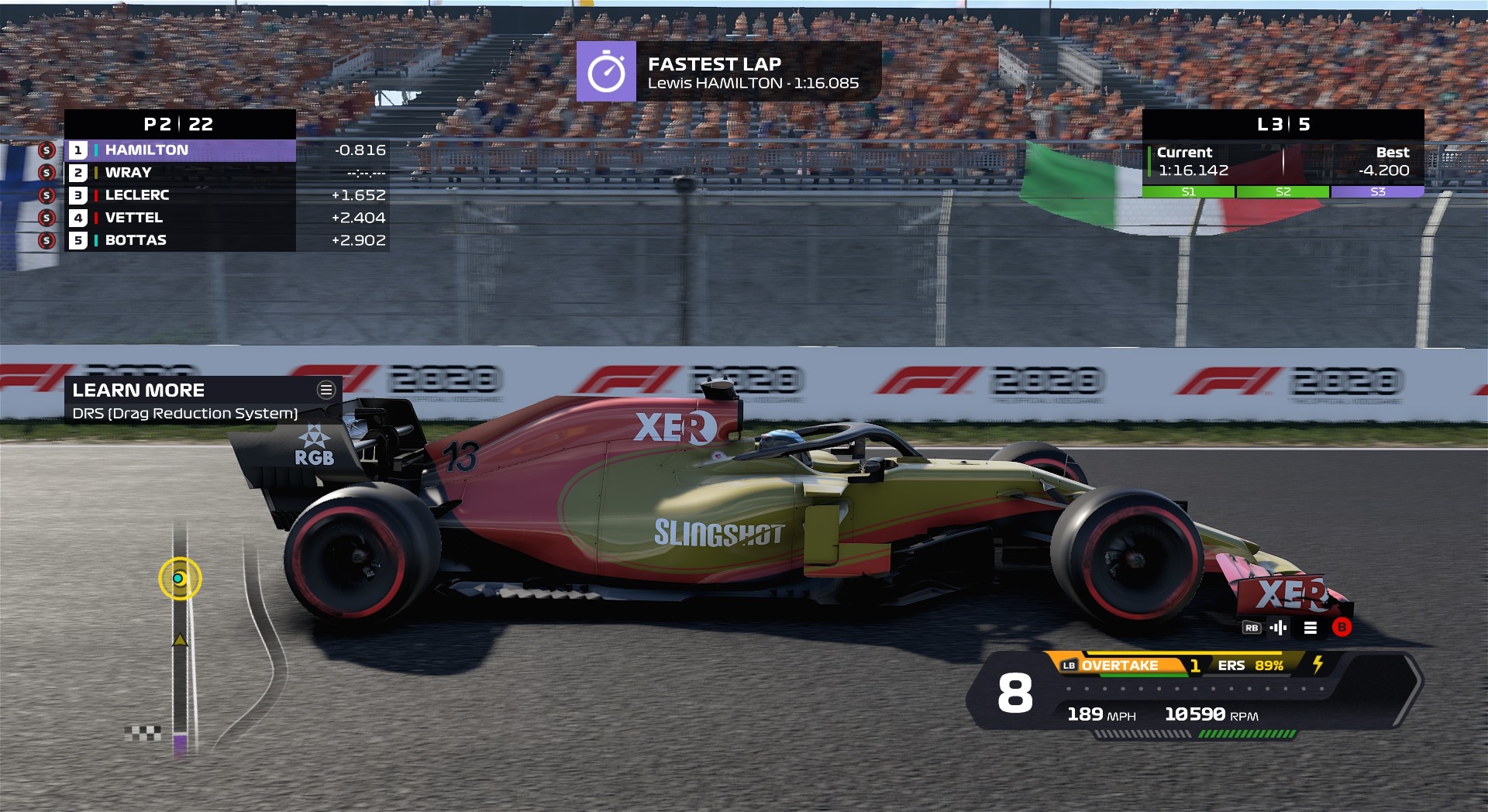 After all of this about what happens off of the track in F1 2020, what about the racing on the track? Putting it simply, I couldn't be happier with the progress of the game. Everything about it feels great, with the cars - particularly the better ones - feeling brilliant to race around. The physics are truly felt if you happen to be in a collision. Lose a wing and you'll be wondering where that downforce has gone. The series has long felt great to race on but the little tweaks made to match the actual cars keep on upping the standard.

Speaking of losing a wing, there's even been a slight tweak to how things happen in a collision. I'm still going to complain a little here, I still keep getting blamed for another rider cutting across and going into the side of me. One egregious example was Hamilton who, speeding up from behind, couldn't hold the inside of a corner and drifted into me. I got blamed for it and I wasn't impressed. I'm still on the lookout every time I come into contact with another car, but the game is starting to hold the AI responsible some of the time.

As for the AI, I can't speak to the difficulty on max settings. What I can say is that Codemasters has made F1 2020 very inclusive and accessible thanks to a slew of assists, as well as the AI difficulty slider. I also must be improving since I've moved up from easy/medium on earlier titles to a solid medium here. No matter the difficulty, the core factor is that the AI seems very competent. You'll keep getting threatened, but it's almost as if Codemasters have adapted their AI from last year's GRID, with the racers seeming to have more adaptability and variety in their moves.

There honestly isn't much else to speak of. There are still aspects of the game to be released, such as the eSports, but Codemasters and the F1 series have a strong track record. The high bar of quality that has been met before is likely to be met again. The one aspect I'm not so sure about is the new 'VIP Podium Pass', essentially a battle pass for F1 2020, unlocking new cosmetic content as well as in-game currency to purchase a further pass.

Due to the game not being out at the time of writing, I can't speak as to the quality of what is in the pass or if it's worth the cost of entry. I don't even know what the cost of entry is, I just know I'm not fond of the inclusion of this new monetisation method. There is, as with other battle pass systems, a free version for those who don't want to pay. 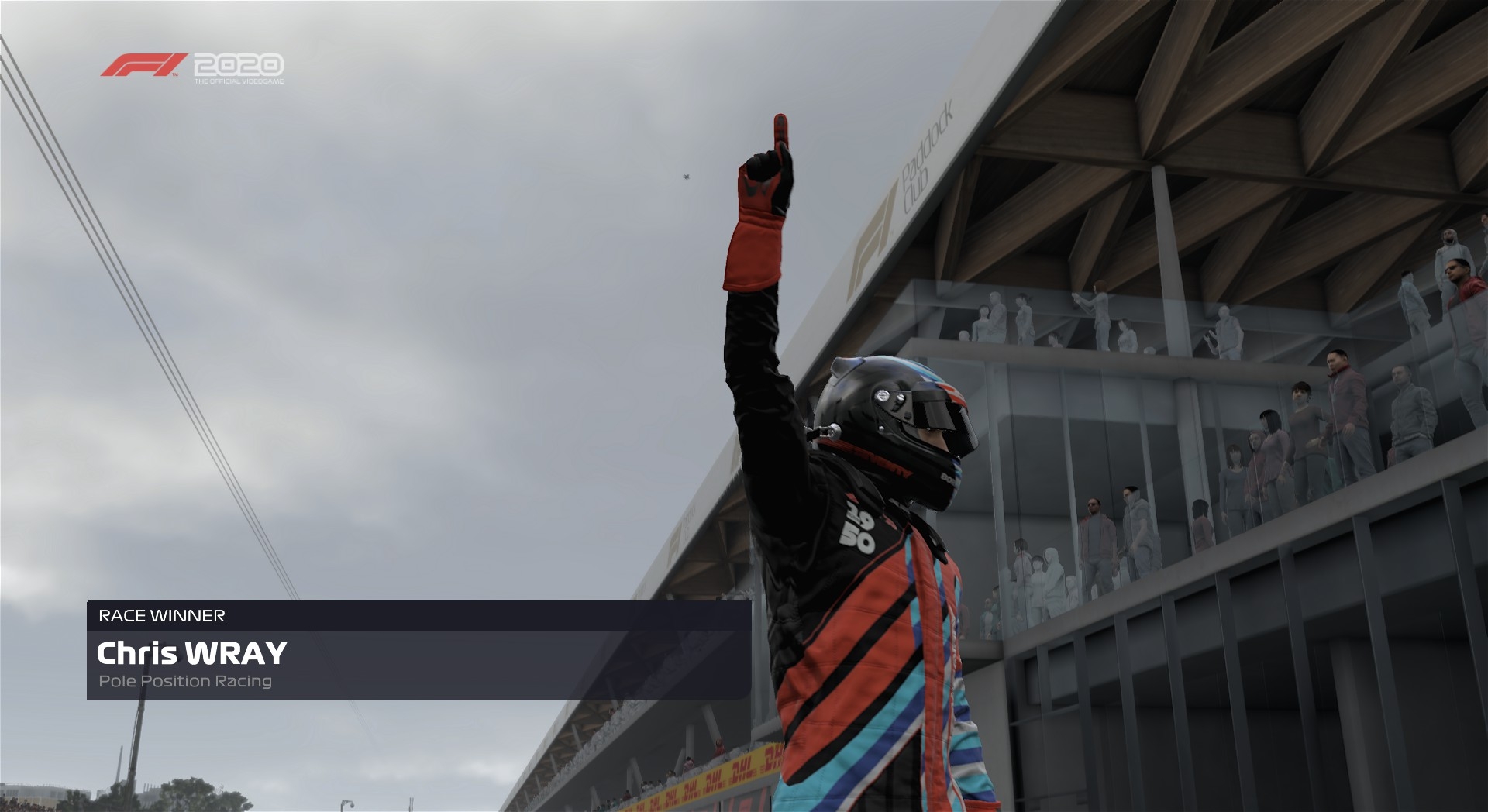 I should be forgiving. I will be forgiving if Codemasters were honest about the new system only including cosmetics. The reason I'll be forgiving is that, if it wasn't clear from what I've said, F1 2020 is a fantastic game. I haven't even covered aesthetics yet, with the game looking brilliant and as detailed as ever, with stunning crisp audio throughout. I've praised Codemasters more than enough for this in the past and I'll keep doing so, the realism approach just works here thanks to the impressive amount of work that's gone into it.

No matter what aspect of F1 2020 you look at, you're going to be impressed. From the content off-track, the racing on-track, the AI, visuals or audio, this is the top of the series to date. I haven't even covered other features like the inclusion of split-screen multiplayer - there's a pandemic on - and even the inclusion of a virtual rear-view mirror, should you want it. This offers more than ever before, with the My Team mode being the thing that puts this above the previous entries in the series.

F1 2020 is releasing tomorrow (7th of July) for those who have preordered the Schumacher edition, offering three days early access. The game 'officially releases' (this is a debate for another day) on the 10th of July for the PC, PlayStation 4, Xbox One and Stadia. Do I recommend it? Most certainly. If you like racing games, get it. If you don't, it's still likely one that could draw you in.

F1 2020 does as much as can be expected from Codemasters, offering an outstanding racing experience on the track. Where it goes further is off of the track, bringing in an incredibly extensive My Team mode, as well as fleshing out the career mode with a full Formula 2 season. With a massive amount of content, great racing, and quality throughout, it's hard not to love the game. The only real issue I have is the inclusion of the new Podium Pass (battle pass) system, adding a microtransaction for cosmetics.