MLB The Show 20 Review – Hit Down the Line

Much like the grand old game it’s inspired by, Sony’s venerable MLB The Show franchise has long been a dependable if somewhat predictable presence. That may be about to change, as it’s been announced the series will officially be going multiplatform next year, but before that happens MLB The Show 20 is here to close out the series’ long unbroken run of PlayStation exclusivity.

Does MLB The Show 20 hit it out of the park in this last PS4-exclusive at bat? Or has series developer SIE San Diego opted for a meek bunt to first base as they prepare for the next generation? Spring training may have been cancelled in the real world, but the virtual ballpark is still open, so let’s see if this year’s big baseball game is pennant worthy, shall we? 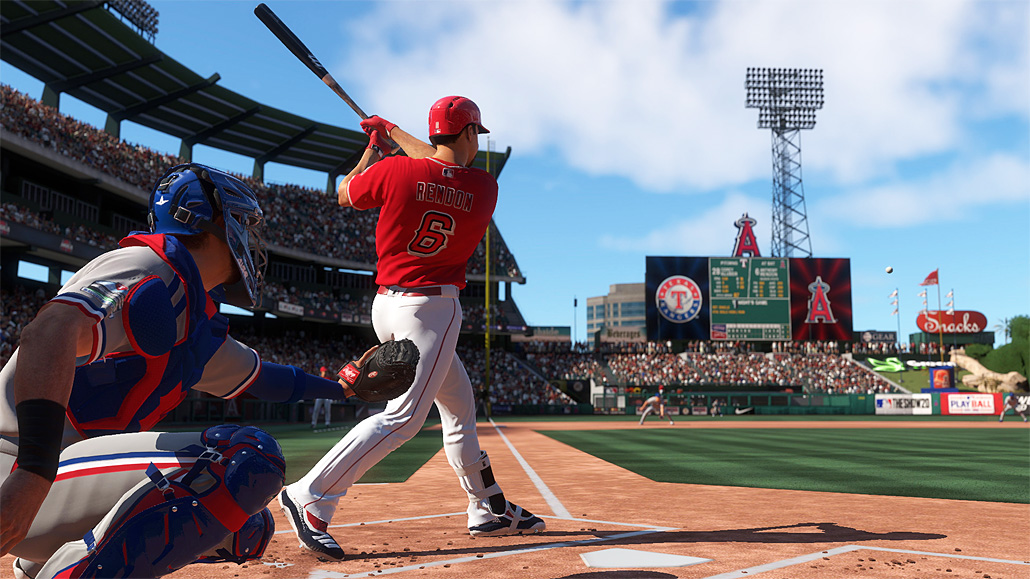 While not as celebrated as Madden, NBA 2K, or other competitors, MLB The Show is one of the most fundamentally-sound sports franchises around. This is a series that knows when to drill down and deliver detail and complex mechanics, and when it’s better to streamline the experience. These games capture the intense back-and-forth dance between batter and pitcher particularly well, while generally keeping fielding simple and unobtrusive. Baseball may have a reputation for being a bit sleepy, but The Show can deliver a surprisingly-intense experience. The series also does a great job of appealing to players of all skill levels, with a number of different batting and pitching schemes, and “dynamic difficulty” that organically ramps up the challenge as your skills improve (this year dynamic difficulty is available in more modes than ever, including March to October). 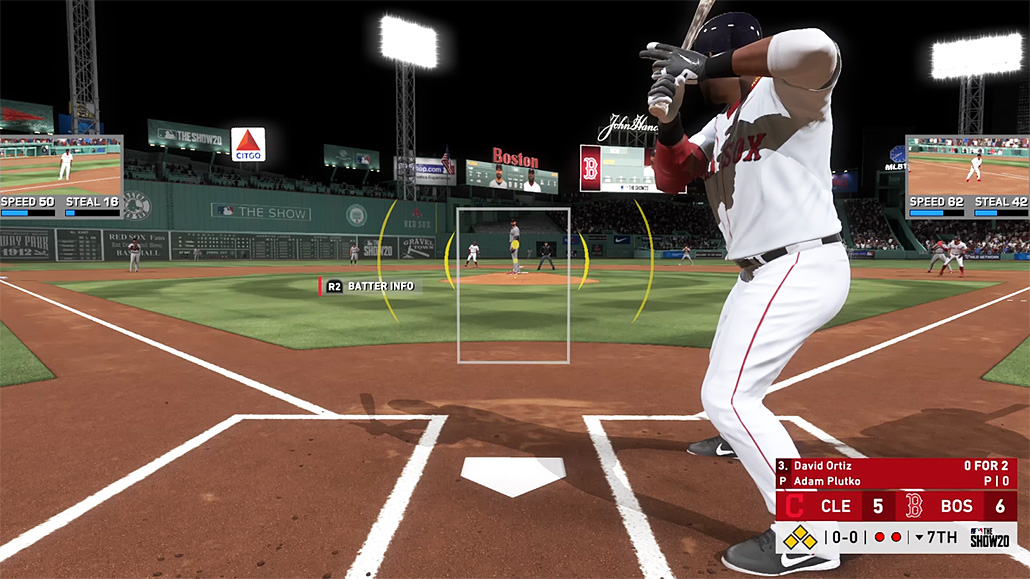 So, MLB The Show 20 delivers a rock-solid on-field experience, but has much changed this year? Probably the most significant new development is the revamped UI for Zone hitting (the most advanced of the various batting control options) – the Plate Coverage Indicator (PCI) now includes both an outer ring representing your batter’s plate vision and an inner ring showing where you need to get the ball if you want to make serious contact. A series of dots have also been added to the center of the PCI, letting you know at a glance whether a batter is more apt to hit power flyballs or contact-heavy grounders. This may sound a touch complicated, but the end result is a system that better communicates each batter’s strengths and gives skilled players more control over the ball. Fielding has also been tweaked, with more varied animations and a new Extreme Catch Indicator, that allows players to be more strategic about chasing down challenging fly balls. MLB The Show 20’s new mechanics aren’t groundbreaking and mostly directed at hardcore players, but they’re welcome nonetheless. 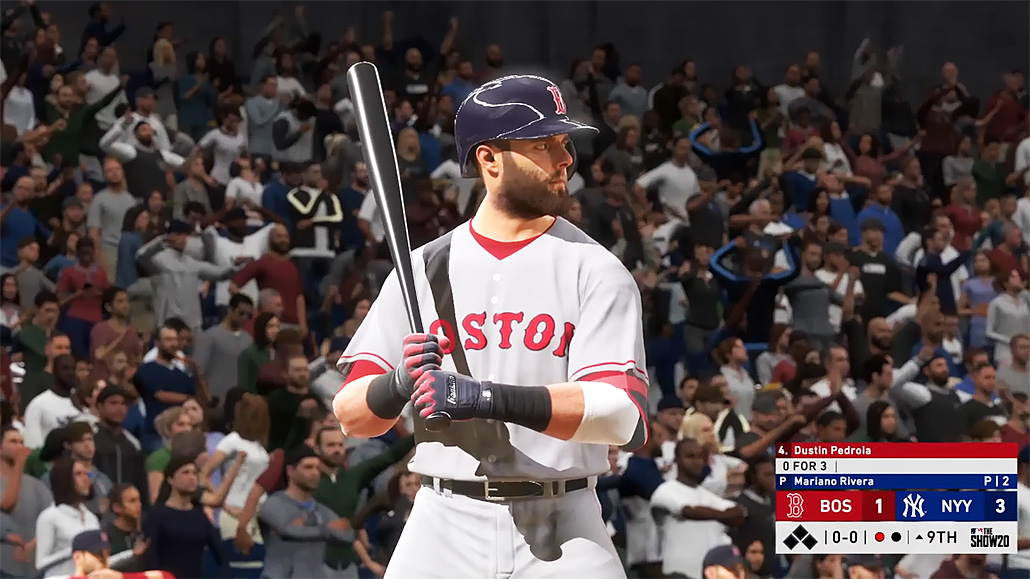 Last year’s MLB The Show 19 represented a bit of an overhaul for the series, as SIE San Diego added a number of new modes, including Moments, which presents players with various historical objectives, and March to October, an alternative to the traditional season mode. Realizing that most sane people don’t have the time to play through a full season of 162 nine-inning games, March to October offers a series of quicker challenges throughout the season – succeed in these and you’ll earn momentum, which will increase your chances of winning simulated games in between challenges. March to October does a fantastic job of making you feel like you’re in control of your team’s fate, while drastically cutting down the grind needed to get through a season. I hope other sports franchises rip off the concept.

Unfortunately, MLB The Show 20 doesn’t introduce anything nearly as significant as March to October. The only major addition this year is online Custom Leagues, which are nice, but the concept could use some refining. Searching for a league you might want to join (there are already thousands) is a bit frustrating and mode doesn’t feel very integrated into the rest of the game at the moment. Custom Leagues aside, SIE San Diego mostly focuses on shoring up existing modes with some welcome new features. March to October gives you greater control over trades and call ups, Road to the Show puts more of an emphasis on player relationships, and the Franchise GM mode now lets you rebrand and relocate your team. 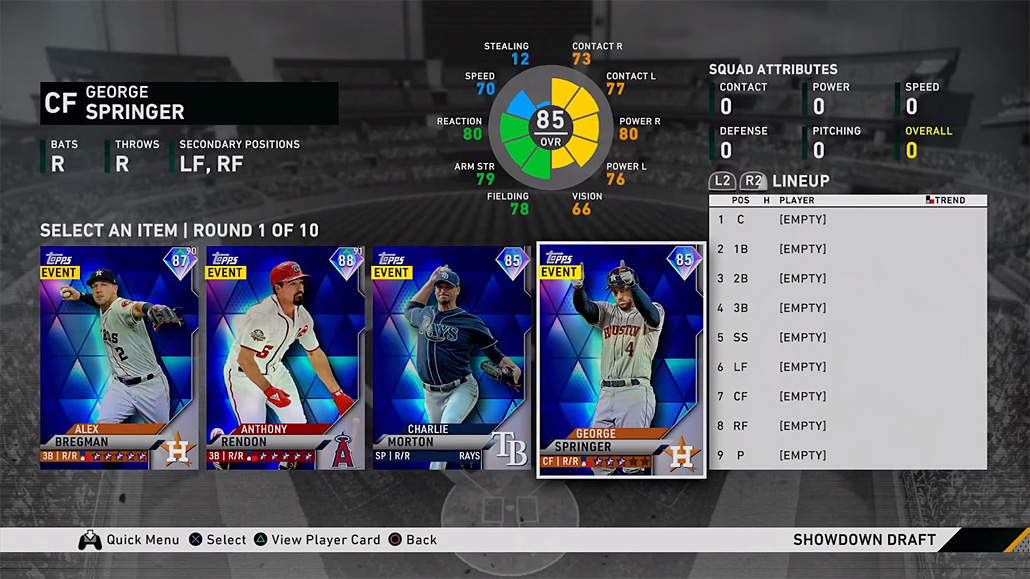 Probably the most significant new twist is Diamond Dynasty’s Showdown mode. Diamond Dynasty is The Show’s Ultimate-Team-style experience, and Showdown lets you prematurely play with some of the game’s more powerful cards as you draft a team and take them through a series of short challenges, culminating in a “boss battle” against a legendary pitcher. Basically, it’s a miniaturized version of March to October, and a great little bite-sized challenge you can complete in a single sitting.

All of MLB The Show 20’s core modes and their new features feel well thought out, delivering depth while also respecting the player’s time. Unlike most other sports games, there’s really no skippable modes here. That includes Diamond Dynasty, which is saying something, as I almost always ignore the exploitative card-collecting nonsense in other sports games. Yes, you can buy card packs with real money, but it isn’t aggressively pushed on players, and overall, Diamond Dynasty comes off less sleazy than, say, NBA 2K’s casino-like MyTeam mode. It never feels like the real experience is locked behind a paywall – even early on when you have nothing but scrub cards, you can still participate and have fun. 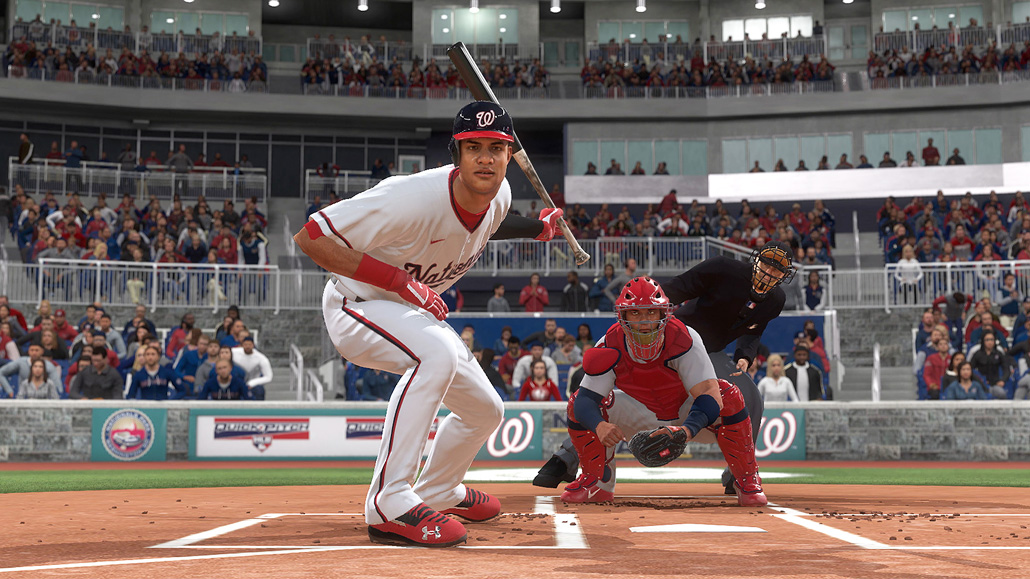 While MLB The Show 20’s gameplay and modes are unquestionably well-designed, the game is decidedly short on flash. The slick cinematic career prologues 2K and EA have been touting in recent years are nowhere to be found here, and overall, the game’s presentation is just a bit dry. Particularly dusty is Franchise mode, which features plenty of menus and options for wannabe general managers, but no story whatsoever. Visually, MLB The Show 20 is also hair below the competition. Players are solidly rendered and a lot of love and obsessive detail has been poured into the game's ballparks, but more could be done to accurately recreate the look and feel of MLB telecasts.

But hey, baseball has never really been about flash, and what MLB The Show 20 lacks in spice, in makes up for in portion size. There’s a lot of content to chew through here, with more modes than any other major sports franchise, and SIE San Diego promises to keep things lively with updated rosters, and a steady drumbeat of new challenges and events. The baseball season may be serious jeopardy due to the coronavirus pandemic, but MLB The Show 20 should keep fans plenty busy in the absence of the real thing.

This review was based on a copy of MLB The Show 20 provided by Sony. You can order your own copy from GameStop.

MLB The Show 20 keeps the franchise’s Cal-Ripken-like streak of solid annual releases intact without swinging for the fences. The on-field action is as satisfying as ever, but developer SIE San Diego mostly plays it safe with a series of modest gameplay tweaks and new features. A bigger shakeup is likely in store when the series goes multiplatform next year, but for now, MLB The Show 20 still touches all the bases.