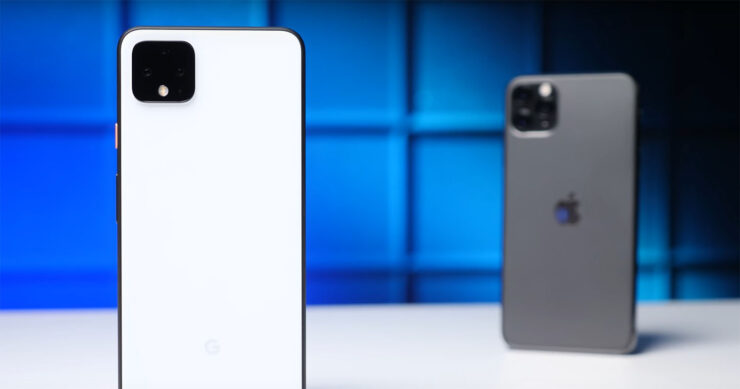 Google’s latest flagships, Pixel 4 and Pixel 4 XL have significantly improved in design, display, hardware, camera and somewhat battery life. However, Apple isn’t putting a brake on its phone business as the iPhone 11 Pro Max is one of the best devices the company has ever made. Now out of both these premium smartphones, which one would come out on top in the latest Pixel 4 XL vs iPhone 11 Pro Max speed test? Let us find out.

The Pixel 4 XL vs iPhone 11 Pro Max Speed Test Reveals Google May Have Improved Since the Pixel 3 XL, but a Lot of Work Is Required

PhoneBuff has come out with yet another app speed test and this time, it’s between Google’s and Apple’s best mobile offerings of the year. Previously, the same speed test revealed that the Galaxy Note 10 Plus got the better of the iPhone 11 Pro Max and that was thanks to the whopping 12GB RAM it had as part of its hardware arsenal. However, things are going to be a lot different here as the Pixel 4 XL is running a Snapdragon 855, and not the Snapdragon 855 Plus for some reason while sporting half the RAM count of the Galaxy Note 10 Plus, which is 6GB.

To remind you, the iPhone 11 Pro Max is armed with an A13 Bionic silicon, along with 4GB of LPDDR4x RAM. If you check out the Pixel 4 XL vs iPhone 11 Pro Max speed test video below, you’ll notice that Apple’s best flagship of the year is able to steamroll through apps, particular the more intensive ones such as Adobe Premiere Rush and the gaming ones. While the Pixel 4 XL is also able to open up apps a little faster than last year’s Pixel 3 XL, processing images and exporting video files is slower as the Snapdragon 855 can’t match the pace of the A13 Bionic.

The first lap is completed by the iPhone 11 Pro Max in just 1 minute and 50 seconds, while the Pixel 4 XL completes it much later, securing a time of 2 minutes and 17 seconds. Now it’s time to see which apps can be stored in the memory; for the iPhone 11 Pro Max, that’s no problem at all. While the Pixel 4 XL is also able to keep apps running in the background, the sheer time difference means it’s not going to catch up to Apple’s 6.5-inch beast of a handset, finishing in second place as a result.

While this might be discouraging for users who want to pick up Google’s latest flagship, you should note that the Pixel 4 XL vs iPhone 11 Pro Max speed opens up a lot of facts. Firstly, Google definitely has its work cut out when it comes to optimizing software. Even before, we reported that the Pixel 4 was delivering a very laggy UI experience, while also dropping frames when video recording at 4K 30FPS.

Hopefully, Google will be able to address these issues in the form of software updates, and perhaps then PhoneBuff will do a re-run down the road.