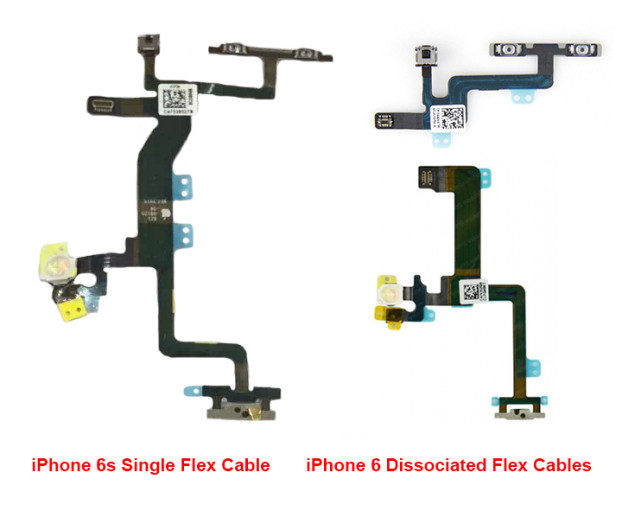 The iPhone 6s duo has seen quite a bit of leaks related to its internals, and we've seen a more compact design for its flex cables surface, as you can see in the image above. The headphone jack combined with the LED flash are now linked with the power and volume buttons on the iPhone 6s, but we have yet to see anything pop up on the SiP modular tech, which combines even the RAM, processor and GPU in a single package.

Coming towards wireless capabilities, the iPhone 6s duo, according to the current information, can be expected to feature an upgraded modem and NFC chip that should out-do the ones found on the iPhone 6.

Not only is Cat. 6 rumored for Apple's upcoming flagship, which will give it download speeds of up to 300 MB/s, but an upgraded NFC chip is also said to be in the works. Qualcomm’s MDM9635M is rumored to be under consideration by Apple, which would not only deliver the blisteringly fast speeds as we mentioned above, but would also do wonders in the power consumption department.

Coming towards NFC, we've seen quite a lot of information surface from some very reliable sources on that subject as well. The iPhone 6's NXP 65V10 chip has been upgraded to 66VP2 on the iPhone 6s, and the device's logic board will reportedly have a smaller footprint, and will feature far lesser chips this time around, including components from Murata for Wi-Fi, Cirrus for audio and Toshiba for its flash memory, as can be seen in the image above.

Apple has not upgraded the RAM on its iPhone lineup for quite a while now, sticking firmly to the old faithful 1GB of memory. But as we move forward, we firmly believe that the Cupertino company should step up its game with the release of the iPhone 6s, upgrading the slacking 1GB of RAM to at least 2GB.

So talking about upgrades, Samsung has already signed off a deal with LG and Apple, in which the Korean manufacturer will hopefully provide the Cupertino giant with DDR4 chips for the upcoming iPhone. In fact, we've heard some interesting news which states that not only will the iPhone 6s be coming with 2GB of RAM, but it will also be sporting Apple SIM - Apple's way of reducing carrier dependency for its devices which was debuted with the iPad Air 2.