As we edge slowly to the next iPhone's launch, 9to5Mac's Mark Gurman seems to have got his game on point when it comes to iPhone component leaks. We've already seen Apple's 2015 flagship's exterior shell leak out earlier, according to which you shouldn't be expecting any major design or form upgrades on the iPhone 6S, as has been Apple tradition. Now, according to today's latest leaks, the iPhone 6S will be able out do its predecessor when it comes to network connectivity. 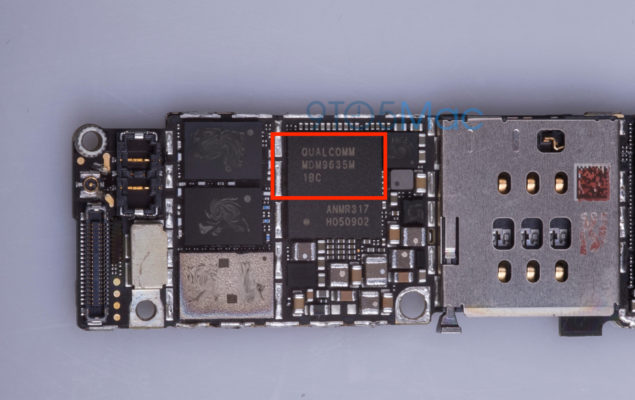 After its rear shell was showcased earlier, now the iPhone 6S' modem has leaked, and looks like Apple will continue its reliance on Qulacomm this time around as well. The modem shown in the image above is Qualcomm's MDM9635M or the 9x35 'Gobi' modem and is capable of delivering up to 300 MB/s download speeds, doubling what the current iPhone 6 is capable of. The 9x35 is also found inside Samsung's Galaxy S5 and is the upgrade to the 9x25 found in the iPhone 6.

Qualcomm also promises that the chip delivers increased battery life, which would undoubtedly end up making the iPhone 6S more battery efficient on LTE, something which has been a thorn in the side of a lot of loyal users. This chip is Cat. 6 and uses lesser space than its predecessor, allowing Apple to save some much crucial space inside the iPhone. Its also manufactured on an upgraded 20nm mode, as compared to the 28nm earlier versions have utilized. All of this results in reduced heat and improved performance, that should benefit users immensely. The iPhone 6S is shaping up to be a good device, by the looks of things so far and all these upgrades coupled with Force Touch should help Apple keep its customers, and perhaps win over some new ones this time around. Stay tuned for more and let us know what you think in  the comments section below.