As we slowly begin to near September's Apple iPhone launches, component leaks related to the upcoming devices have started to increase in number as well. We've seen quite a few already, and you can add more to that list today. Until now, the iPhone 6S is rumored to be similar in design, come with upgraded camera sensors and be slightly thicker owing to force touch. A couple of new components have surfaced courtesy of China's Weibo and you can take a look at it below. 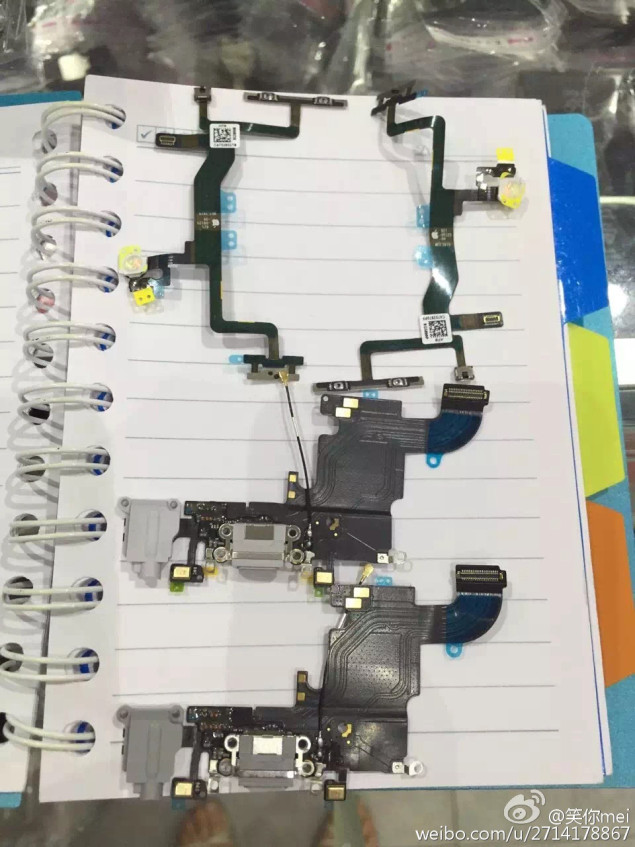 Starting from the iPhone 6S' flex cable above, we see that internally, Apple's upcoming device will be quite different when compared to its predecessor. The power and volume buttons are now linked with the camera sensors, LED flash and the headphone jack combined with the lightning port. Rather then bother itself with two different flexes, Apple seems to have combined things, to improve space constraints. A comparison of today's cables, to the iPhone 6's can be seen below.

Aside from flex cable changes, all those who hated the earlier iPhone's protruding camera are in for some frustrating news today. Courtesy of an assortment of camera rings snapped, we see that the iPhone 6S will indeed be coming with a protruding lens this time around as well. While Apple might have opened itself up to changes spawned by customer demands, seems like the Cupertino manufacturer hasn't lost its propensity for stubbornness either, as can be seen in the image below.

Even though the camera ring might still be there, the iPhone 6S is said to be coming with an improved camera sensor with a resolution of 12 MP. Its been quite a while since Apple upgraded the resolution on its flagship smartphone, and with the Android world moving quite fast in terms of specs, the Cupertino manufacturer might be forced to do so this time around. Oh and the outer circle of the iPhone's Touch ID sensor will also remain the same, with a champagne gold ring being pictured today as well.

So that rounds up our today's iPhone 6S component leak. While leaks have occurred this time round as well, they're not as strong as last year so it seems that Apple's put in some stoppers around its manufacturing resources. While some things have changed on the iPhone 6S, others remain the same; which is exactly what we'd expect given that this isn't a generation upgrade for the smartphone. Thoughts? Let us know what you think in the comments section below and stay tuned for more.