Can You Downgrade watchOS 6 GM to watchOS 5? 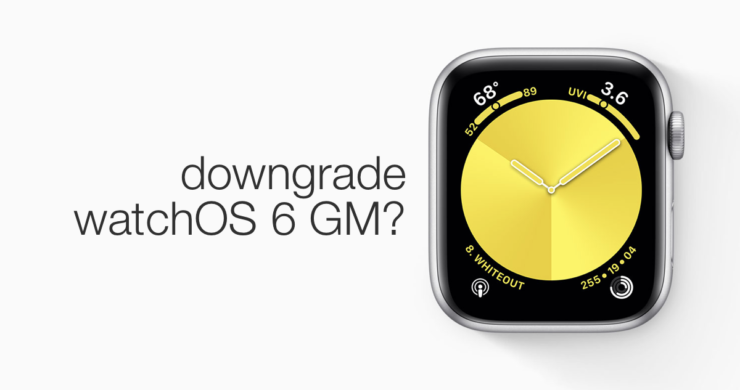 Is it possible for Apple Watch users to downgrade watchOS 6 GM to watchOS 5? Let’s have a quick talk on it, as usual.

Please check out the following as well:

With the official watchOS 6 release date only a few days away, the GM build is available for developers right now. If you were on one of the previous betas of watchOS 6, then you are one of the privileged few that will receive the watchOS 6 GM update over the air, subsequently the final build. However, if you were wondering whether or not you could downgrade watchOS 6 GM to watchOS 5, for whatever reason, then you will be slightly disappointed to learn that you cannot.

The reason why you can’t downgrade watchOS 6 GM to watchOS 5 is because there is no port on the Apple Watch which can you use to interface it with your PC or Mac. This in turn means that you can’t push any software update to the wearable on your own, and you’re stuck on the current version of the beta or public release for good. You can, of course, upgrade to the updates that become available to you. There’s no way of reverting back to the older software. Game over.

Whenever a new watchOS beta is available to you, it’s best to think twice before installing the update. There have been instances where watchOS betas went berserk and bricked the Apple Watch altogether. In other words, if you are really feeling adventurous and wish to try out new betas, then just go ahead and do it on a device that is a ‘spare.’ I understand that having a second Apple Watch sounds a bit outrageous, but trust me, if you are a true Apple fanboy, you definitely have one lying around and refuse to tell anyone around you.

To wrap things up, you can’t downgrade watchOS 6 GM to watchOS 5 no matter what you do. If you are feeling lucky and happen to have an Apple Store near you, then you may try your luck there. Who knows, maybe they’ll just grant you your wish and restore the Apple Watch back to watchOS 5. But given that watchOS 6 is set for release in a few days, we doubt they’ll downgrade your device. Still, we’ve known people to have solid luck at times.

Send Your Current Location to Someone Using Apple Watch [Tutorial]

How to Use Apple Watch Noise App and Set up Notifications