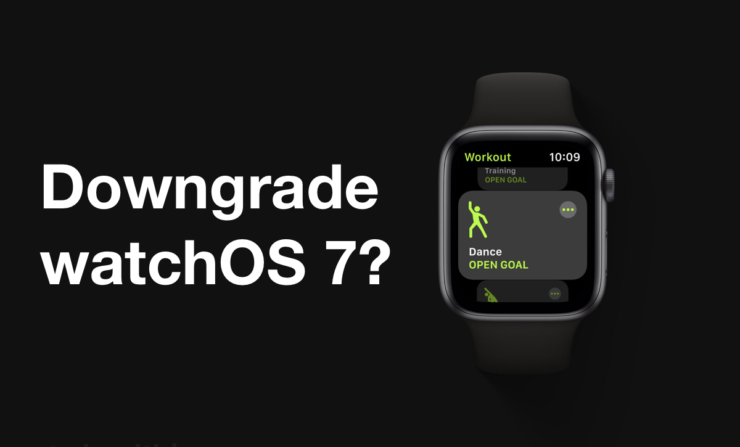 Can I downgrade watchOS 7 beta to watchOS 6 on my Apple Watch? We will answer that question right now.

watchOS 7 packs some of the best features we've ever seen on Apple Watch. If you are eager to learn about everything Apple announced on the Apple Watch end at WWDC 2020, then be sure to check out our watchOS 7 launch post here:

With that out of the way, there are going to thousands of people who are going to trip over themselves in order to download and install watchOS 7 beta onto their compatible Apple Watch devices. And inevitably, lots of users are going to realize that beta software is not quite daily driver material despite all the warnings available to them beforehand. The immediate course of action, in everyone's mind, would be to downgrade back to watchOS 6. But really, can you downgrade watchOS 7 beta to watchOS 6 and make things normal again?

Once You Update to watchOS 7 Beta, There's No Way to Downgrade Back to watchOS 6 on Apple Watch

The obvious and instant answer to that is a resounding NO, and let us explain why that is so. See, unlike the iPhone and iPad, the Apple Watch does not feature a port of any sort or comes with any special cable which you can use to interface it with a PC or a Mac. This in turn means that you cannot jump between two different versions of a software in case one is giving you some sort of issue. Hence, you are forced to download and install every subsequent beta (provided you have installed it in the first place) that is available to you until the full and final version of that software becomes available. In other words: you cannot downgrade watchOS 7 beta to watchOS 6.

It shouldn't come as a surprise to anyone, but major watchOS betas should always be installed on spare or 'extra' devices for testing purposes. This way you ensure that your daily driver Apple Watch would never go into limbo, forcing you to take a walk to an Apple Store near you for a replacement or fix. It's best to stay away from betas until or unless you know exactly what you plan to do with them. If it's all for fun and games, then it's entirely up to you to go wild with the Apple Watch you have and install whatever you think suits you best.

While you are here, be sure to check out the following as well: