Can I Downgrade watchOS 6 Beta to watchOS 5? 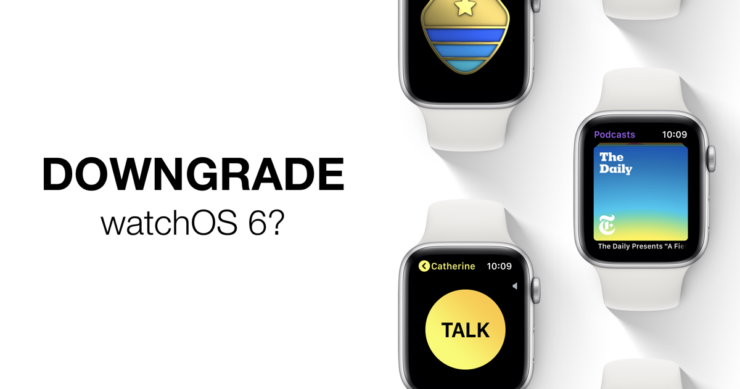 A question which many are going to ask in the coming months: can I downgrade watchOS 6 to watchOS 5 on Apple Watch?

watchOS 6 has been announced and it’s packed with some great features which you can read all about here. So great in fact, that some went ahead and got themselves an Apple Developer Program membership for $99 just to try out those features, some did it for free, while some decided to wait for the final release which is due this fall. Whatever the case, you might be wondering whether or not you can downgrade watchOS 6 beta to watchOS 5? That’s a fairly good question, because if something goes wrong during usage then the most obvious thing to do is downgrade back to the public release of a particular platform, making things right software-wise, at least. For example, downgrading to iOS 12 from iOS 13 beta in case of poor performance and broken app compatibility. But things are a little different on the Apple Watch.

You see, unlike the iPhone, iPad or iPod touch, the Apple Watch does not come with a cable of sorts that allows you to interface it with a PC or Mac. There is just no way you can make your Apple Watch show up on iTunes. What this means is that you can’t downgrade watchOS 6 beta to watchOS 5 at all. Once you install the watchOS 6 beta, you can’t downgrade back to any public release of the watchOS firmware. You’re stuck on it for good. The only way out of this is by installing all the subsequent betas of watchOS 6 until the final version drops some time later this year in the fall.

However, if you feeling extremely lucky and happen to have an Apple Store nearby then you may make a Genius appointment and try your luck with the downgrade directly from the company itself. Even if they do agree, your Apple Watch will be sent out for the downgrade and may take a few days. Don’t take our word for it though as Apple may decline the downgrade completely. But hey, it never hurts to try, right?

Given how convenient over the air updates are, it’s still an eyebrow raising thing that we can’t restore a device to the public version of a particular software release without having to plug in wires. We’re not saying that Apple should allow us to jump to any firmware of our choice, but at least give us the option to get back on the sane software track, which happens to be publicly available and currently signed by Apple itself.

Make your move carefully, folks. Until or unless you have a spare Apple Watch lying around, only then give watchOS 6 beta a spin. Don’t risk turning your wearable into a vegetable for a certain period of time just because that one particular feature looked so cool and you just had to try it out.

Send Your Current Location to Someone Using Apple Watch [Tutorial]