SoulCalibur VI Adds the Devilish Inferno to its Stacked Roster 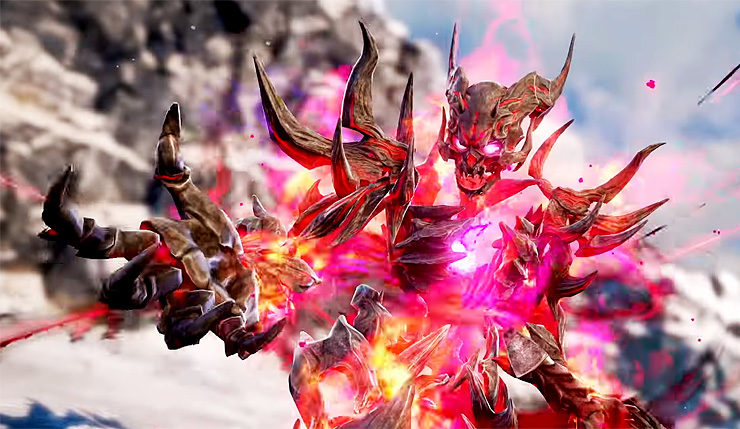 Soulcalibur VI has added series antagonist Inferno as a playable character. The fiery monstrosity served as a boss in first four SoulCalibur games, and was an unlockable character in SoulCalibur and SoulCalibur II. You can check out the big brute in action, below.

Inferno can use any weapon and mimic other character’s moves, usually with a brutal extra twist. Unsurprisingly, the character can’t be used in online competition, as he’s basically all characters in one. Not exactly fair, but fun for beating up on your friends or little brother. Here’s a quick Inferno bio courtesy of Bandai Namco:

Inferno, the original antagonist that kicked-off decades of struggle for power in both Soul Blade and SoulCalibur returns to SoulCalibur VI to wreak havoc and deal death to all challengers. Inferno took the shape of a sword in order to devour more souls and came to possess individuals to further his unholy cause. In his sword form, Inferno came to be known as Soul Edge. Those who held the Soul Edge were unable to escape from the curse of his evil powers.

As the evil spirit of Soul Edge, Inferno is fearsome, possessing deep knowledge of fighting techniques which he mimics with uncanny skill, allowing him to use any weapon and fighting style with a phenomenal degree of expertise. Inferno’s power defies standard means of measurement, if one were only comparing skill and weaponry, then Inferno easily transcends any of Soul Edge’s previous vessels.

Soulcalibur VI hacks and slashes its way onto PC, Xbox One, and PS4 on October 19. Wccftech’s own Christian Vaz recently had a chance to go hands on with SoulCalibur VI – check out his impressions here.