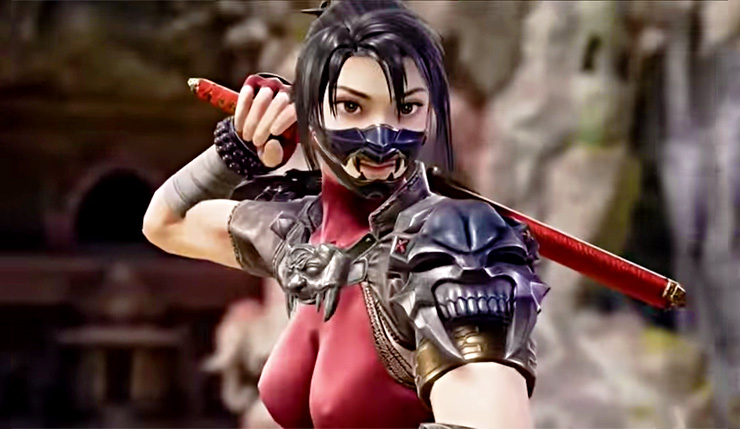 The deadly ninja Taki has been confirmed for Soulcalibur VI. Granted, she hasn’t been officially announced by Namco Bandai just yet, but a Taki trailer leaked on the Japanese video site NicoNico earlier today. Of course, the trailer is now all over YouTube. The quality of the video is a bit low, but it still provides an exciting peak at the returning fan-favorite character – check it out, below.

As you would expect from a ninja, Taki is a fast, deadly fighter who specializes in putting pressure on her opponent. It looks like Taki hasn’t changed too significantly since the last time we saw her, although she is wearing a mask this time around for some reason. Taki has been a staple of the Soulcalibur series from the beginning, appearing in every game up until Soulcalibur V, which she was notably absent from.

For those new to the Soulcalibur series, Taki is a Japanese demon-hunting kunoichi and the greatest warrior of the Fu-Ma ninja clan, who was originally on a quest to destroy the evil Soul Edge. Recently, Taki disappeared while trying to track down her demon-corrupted adoptive father Toki. Taki’s disciple Natsu set off in search of her, and, based on her return in Soulcalibur VI, it seems she may have found her!

Taki has always been one of my Soulcalibur favs, so it’s good to see her kodachi and bounce physics are making a comeback. Now all they have to do is bring back Seong Mi-na and I’ll be happy. So far, Sophitia, Mitsurugi, Kilik, Nightmare, Xianghua, Ivy, Zasalamel, Siegfried, the Witcher series’ Geralt, and new character Grøh have been confirmed for Soulcalibur VI. Which characters would you like to see make their return?