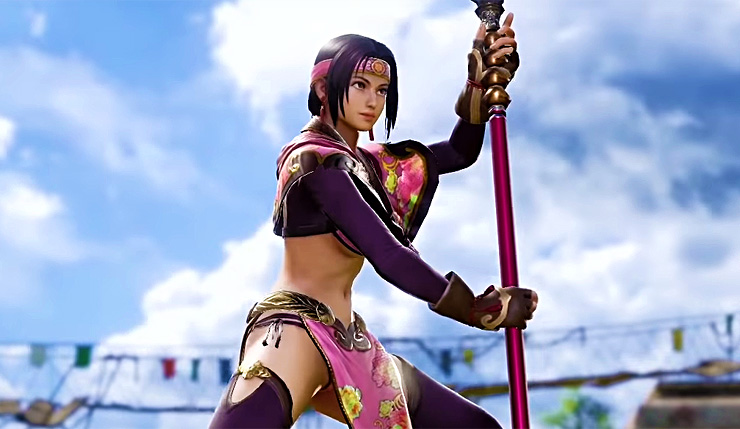 EVO 2018 took place this past weekend, and, as usual, the tournament played host to a ton of exciting fighting game announcements. Of course, Soulcalibur VI got in on the fun, revealing two new roster additions – the hulking, axe-wielding Astaroth, and my all-time Soulcalibur favorite, Seong Mi-Na. Finally! You can check both of them out in action, below.

Astaroth, who’s been in every Soulcalibur game to date, is the series’ quintessential tank. He moves slowly, but can deal out absolutely brutal amounts of damage. Here’s a quick Astaroth bio:

Astaroth is a golem created by the leader of an evil cult. Imbued with an amazing strength as well as the martial art experience of highly skilled warriors, he is the perfect weapon to serve the cult doctrine of destruction and rebirth. All too aware of his mission, the creature is tirelessly seeking for the cursed sword. He was granted power during his creation by Ares, the Greek god of war, and the god remains the golem's one true master. Astaroth's fighting style is based on the White Giant that Ares once observed, but the golem doesn't seem to care that his style is a mere copy. All that matters to him is how many people his techniques enable him to kill, and how cruelly he can do it.

Seong Mi-Na is another longtime series veteran, although she disappointingly sat out Soulcalibur V. Her Scarlet Thunder halberd and speed make her a great hit-and-move long-range fighter. Seong Mi-Na looks to have received a more significant visual revamp than some of the other returning characters (I’m not sure if her new bikini top is the most, er, practical of battle attire). Here’s a quick Seong Mi-Na bio:

When Seong Mi-Na’s father decided to search for a marriage suitor for her, she decided to run away. In her flight, she took the most precious treasure of the Seong family, the Scarlet Thunder a weapon passed down through countless generations. As one would expect of the only daughter of the Seong family master, Seong Mi-Na trained fiercely in the art of the longsword and acquired great strength and agility. Despite the weight of her weapon, she wields it with disconcerting ease and grace.

In addition to newly-revealed Astaroth and Seong Mi-Na, Voldo, Talim, Maxi,  Yoshimitsu, Sophitia, Mitsurugi, Kilik, Nightmare, Xianghua, Ivy, Zasalamel,  Siegfried, Taki, the Witcher series’ Geralt, and new character Grøh have been confirmed for Soulcalibur VI. That brings the 17 characters – Namco Bandai hasn’t confirmed how many characters Soulcalibur VI will launch with, but the E3 build of the game featured a character select screen with 23 spaces. So, there may be a few more names left to reveal!