Soulcalibur VI Reveals the Freaky Voldo as its Next Character 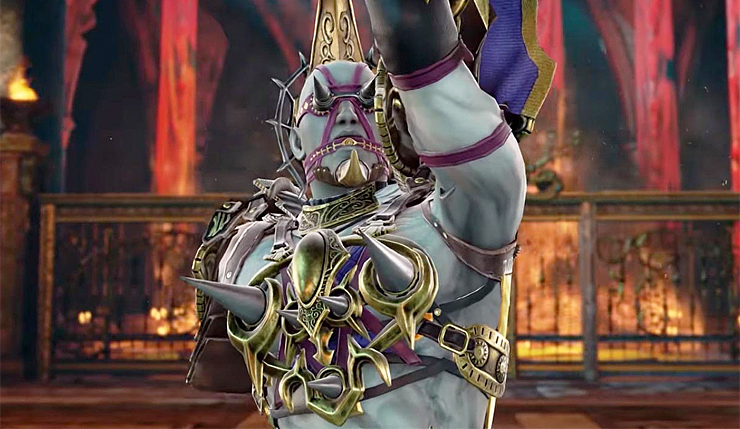 Soulcalibur VI has added the bizarre spiked-codpiece-sporting Voldo to its ever-expanding roster. Voldo has been bringing freaky flair to Soulcalibur since the beginning, appearing in every game in the series to date. Check out Voldo in all his spider-walking, hip-thrusting glory, below.

Needless to say, Voldo is an unconventional fighter, who can throw opponents off with his unpredictable attacks and movements. He can also fight while facing away from opponents, which gives him a whole new set of moves. Here’s a quick Voldo bio courtesy of Bandai Namco:

Fan-favorite Voldo returns with his signature style and maniacal moves. Voldo is a long-time character in the Soulcalibur franchise, being one of only five characters to show up in every main installment. Voldo was the right-hand man to Vercci, an arms dealer with the nickname “Merchant of Death”, and was tasked to protect the Money Pit, where all of Vercci’s treasures were kept after his death. After spending years in the dark depths of the Money Pit, Voldo lost his eyesight but gained a heightened sense of hearing and awareness, making him extremely deadly to those who dared to enter the Money Pit in search of riches. Both longtime fans and new players will enjoy the exotic gameplay that accompanies this distinctive character in Soulcalibur VI.

It's unknown exactly how many fighters Soulcalibur VI will launch with, but there can't be that many more characters left to announce. What other classic Soulcalibur characters might join the roster? Dammit, I’m still holding out hope for my old favorite, Seong Mi-na!