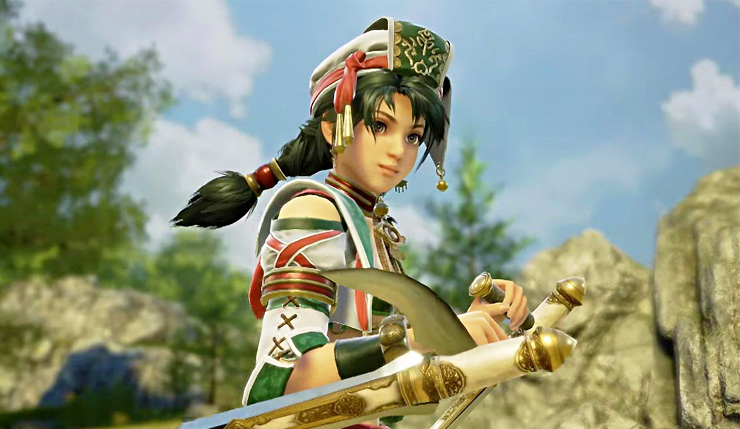 SoulCalibur VI has added “The Last Priestess of the Winds,” Talim, to its ever-expanding roster. Talim was first introduced in Soulcalibur II and has appeared in every entry in the series since, becoming a strong fan-favorite. You can see her in action, below.

Wielding dual elbow blades and the power to control the wind, Talim is a fast, close-range fighter who discombobulates opponents with quick strikes from all directions. Here’s a quick Talim bio:

Hailing from the Village of the Wind Diety, a remote island tribe in South-East Asia, Talim was raised as The Last Priestess of the Winds, being the only daughter of the village shaman. Through this role, Talim learnt the ways of the ceremonial Wind Dance and grew up with the two ancestral elbow blades, Syi Sarika and Loka Luha, used for this sword display. Though trained with the blades as part of the island’s ancient ceremonies, Talim’s vast mastery of these weapons and control of the very wind itself, provided her with a fighting ability vastly beyond her young years.

In addition to Talim, Maxi,  Yoshimitsu, Sophitia, Mitsurugi, Kilik, Nightmare, Xianghua, Ivy, Zasalamel,  Siegfried, Taki, the Witcher series’ Geralt, and new character Grøh have been confirmed for Soulcalibur VI. It's unknown exactly how many fighters Soulcalibur VI will launch with, but the roster must be getting close to full.

Bandai Namco has also revealed a bit about Soulcalibur VI’s story mode, entitled Soul Chronicle. The mode will cover the entire Soulcalibur saga, with extra side stories focused on individual characters. The story will be told via 2D and 3D cutscenes, static illustrations, and RPG-like “talking head” conversations. Sounds fairly ambitious! Check out some screenshots from the Soul Chronicle story mode, below.