Samsung’s upcoming flagship smartphone has been plenty in the news lately and thus, we already have a fair idea about what to expect from the upcoming flagship, given that the renders have already come forth. However, not a lot of information has been spilled concerning the Galaxy S11 performance up until now, and the phone has apparently been spotted on Geekbench. Thankfully, the listing also reveals some Galaxy S11 specs, so let us jump into these details right away.

According to the listing, Galaxy S11 specs include Exynos 990, as reported about before. This is likely the international version of the phone, as the U.S. one is expected to be underpinned by Qualcomm’s upcoming Snapdragon 865. To be more specific, this is the Galaxy S11 5G we are referring to, which apparently bears the model number SM-G986B. According to the Geekbench 5 benchmark, this model will apparently feature 12GB of RAM. 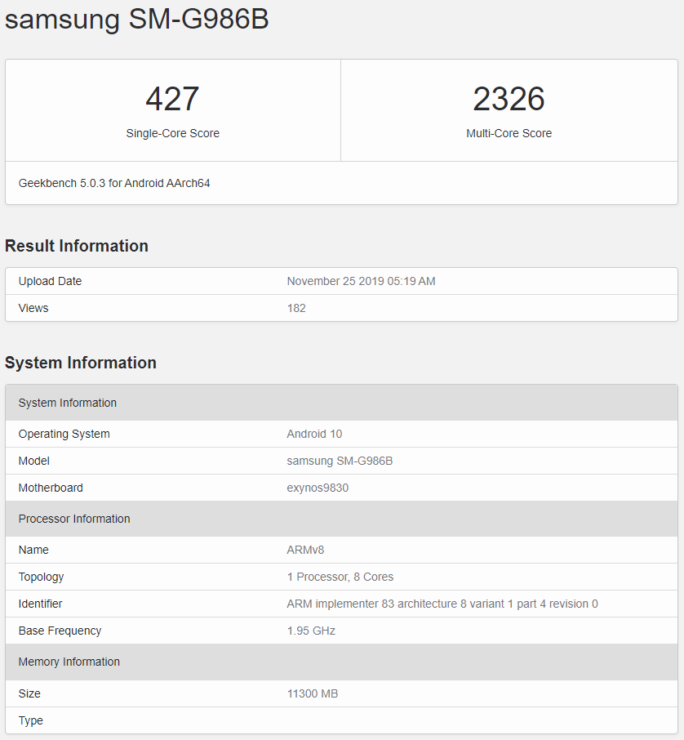 Since the Galaxy S11 specs are better in every regard, you would naturally expect it to have better points. It’s highly possible that this is an unoptimized version of the phone and the final handset will likely do better in the future. Fortunately, that might not take a long time, as Samsung is expected to unveil the Galaxy S11 range in February 2020. The phone is tipped to have a vastly improved camera system and a 120Hz display.

As the launch date inches closer, we will probably get to hear about more the Galaxy S11’s performance, along with the internals underneath the hood, so stay tuned for more.