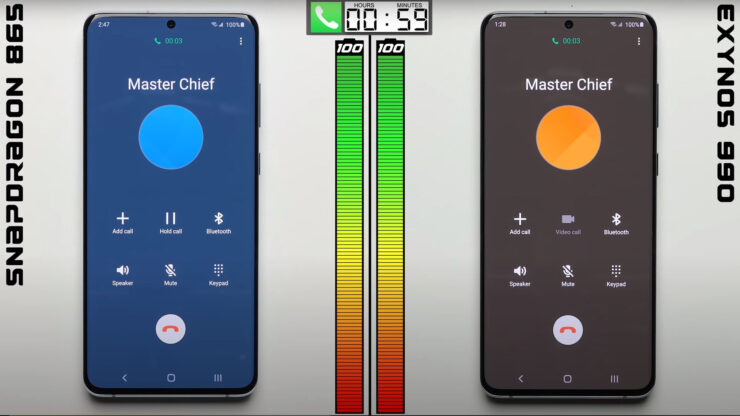 The Galaxy S20 Plus secures a middle ground between the Galaxy S20 and the Galaxy S20 Ultra. Despite not being the top-tier model, it’s still loaded with impressive hardware specifications and comes with a generous 4500mAh battery that should provide adequate screen-on time even with the 120Hz refresh rate enabled.

However, If you’re living anywhere but the United States and Canada, you’ll only get the Galaxy S20 Plus with the Exynos 990 and not the Snapdragon 865. Even Samsung’s home market of South Korea was flooded with Snapdragon 865 variants, so there must be something going on right? This battery test video provides more details on the difference between the two variants so let us check out that clip right now.

Not Surprisingly, the Snapdragon 865-Fueled Galaxy S20 Plus Holds Out Against the Exynos 990 Version

PhoneBuff calibrated both the Exynos 990 and Snapdragon 865 versions of the Galaxy S20 Plus in the video below to make sure that the test conducted was as fair as possible. Both phone were running at their native 120Hz refresh rates, with speakers functioning at the same decibel count and screen brightness set to 200 nits. Though the Snapdragon 865 version doesn’t exhibit a huge lead during the beginning of the test, that difference becomes a whole lot extended as the video test progresses, showing that the Snapdragon 865 is not only faster, but contributes a lot to the efficiency factor, resulting in improved battery life.

During the gaming test, the Galaxy S20 Plus with the Snapdragon 865 obtains a bigger lead, having 25 percent of battery life remaining, while the Exynos 990 variant is down to just 16 percent. As expected, this version’s battery dies off much quicker, with the Snapdragon 865-powered flagship having 11 percent life remaining, and it manages to deliver an additional 60 minutes during the Spotify test with 3 percent points remaining in the tank. Now that’s impressive.

PhoneBuff also recorded the overall screen-on time, just to give you an idea on how the two devices performed.

If you don’t already know this, Samsung’s chip division was reportedly grilled by the company’s shareholders for selling Snapdragon 865 versions in South Korea, a market where Exynos-powered Samsung smartphones are always sold. This could be because the team recognized the Snapdragon 865 as a more capable SoC.

The technology giant also had to shut down its custom core development facility in Austin, Texas, revealing that things weren’t going according to plan. Perhaps with the rumored Exynos 1000, Samsung might bring improved competition in terms of both performance and efficiency so that it is able to take on the upcoming Snapdragon 875.