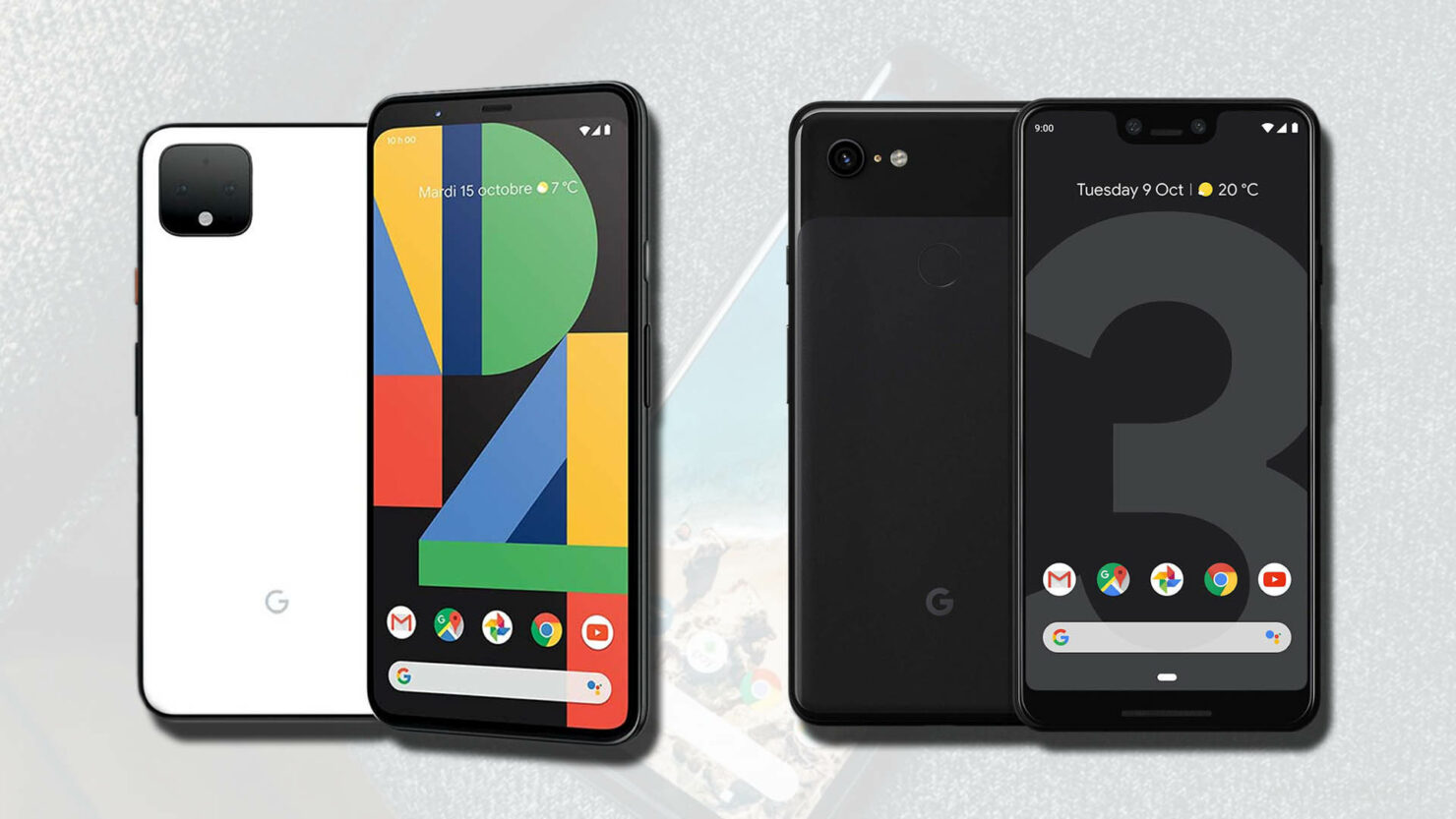 With just a few days remaining for Google’s October 15 event, we can expect a bevy of products to be showcased. Of course, a lot of you are excited and waiting for the Pixel 4 and Pixel 4 XL so we’ll just jump on this topic straight away. Apart from scaling up the design, at least in our opinion, Google has also gone forth and included a myriad of features, which we’ll be talking more about here in-depth. This will help you decide which model to purchase down the road. Without wasting any precious time, here’s a closer look at the Pixel 4 and Pixel 4 XL vs Pixel 3 XL.

As you may have noticed, the unsightly notch is no longer present on the Pixel 4 or Pixel 4 XL as it is on the Pixel 3 XL, but for some, it’s just a matter of personal preference. However, we do believe that a lot of potential buyers will appreciate the Pixel 4 XL sporting the same 6.3-inch Quad HD+ OLED screen as the Pixel 3 XL without the hideous chunk of that bezel. In addition, there’s another upgrade added to the mix and it’s present on the Pixel 4 too; ‘Smooth Display’. In short, we should expect a 90Hz refresh rate on these upcoming smartphones, allowing for more fluid scrolling and animations, something that’s visible on the OnePlus 7 family. For those wanting the potentially cheaper Pixel 4, we want to keep it in your knowledge that you get a smaller 5.7-inch Full HD+ OLED panel.

Though we were hoping for the slightly more powerful Snapdragon 855 Plus, here we are. Both the Pixel 4 and Pixel 4 XL will come underpinned by Qualcomm’s Snapdragon 855. Additionally, Google is expected to bump up the LPDDR4x RAM count on both devices by 50 percent, resulting in the Pixel 4 and Pixel 4 XL shipping with 6GB of memory. That’s still less for an Android flagship in 2019, but it’s more than the 4GB RAM running in the Pixel 3 XL. Hopefully, Google will tone down its aggressive RAM management feature for both devices, leading to more apps running in the background rather than being closed just as soon as you minimize them.

You’ll still be limited with what you can do with a Pixel 4 or Pixel 4 XL in your hand when compared to an Android device rocking 8GB or even 12GB RAM, but at least its a notable bump in specs when pitted against the Pixel 3 XL. Coming to the storage department, we expect both models to be offered in the 64GB and 128GB storage variants, and before you ask, no, you cannot upgrade the existing onboard memory, so choose wisely. If you take a lot of images, videos, and like to consume media on your smartphone more than the average person, you’re better off with a 128GB model. Before we forget, there’s a chance Google might incorporate slower UFS 2.1 flash memory inside the Pixel 4 and Pixel 4 XL, at least according to previous benchmarking tests.

The UFS 2.1 standard is significantly slower than the UFS 3.0 one, with the OnePlus 7 and Galaxy Note 10 series adopting the newer and speedier hardware. Devices with UFS 3.0 storage will open up and load apps faster, display images quicker, and keep up with the extremely high write speeds caused when recording video at 4K. While having UFS 2.1 storage in a smartphone may not necessarily affect your daily usage due to the standard’s maximum sequential read and write speeds peaking out at 850MB/s and 260MB/s, note that UFS 3.0 is always will be faster and have dedicated benefits as opposed to a previous-generation standard.

What’s disappointing about these specifications is the Pixel 4 getting treated to a rather small 2800mAh battery, while the Pixel 4 XL housing a large 3700mAh cell. Thankfully, it’s bigger than the 3430mAh capacity found in last year’s Pixel 3 XL. Even with the 90Hz refresh rate mode enabled, future Pixel 4 XL owners can expect an ‘almost all-day’ battery, but like always, your mileage will vary depending on your usage. Our belief is that even with the 90Hz option disabled, we don’t think Pixel 4 owners will experience an ‘all-day’ battery life, so keep that in mind.

According to leaked specifications, both the Pixel 4 and Pixel 4 XL are expected to ship with an 18-watt USB-C fast-charger, but no details are present on how fast the battery can top up wirelessly. It’s also important to note that just because Google has bundled an 18-watt fast-charger, the Pixel 4 range won’t necessarily cap out at only 18 watts. That’s because a recent test revealed that Apple’s iPhone 11 series’ charging limit can reach 22 watts, so we’ll have to wait and see where the Pixel 4 family’s charging speeds peak at.

Pixel 4, Pixel 4 XL vs Pixel 3 XL Camera Details; Google Goes Multi-Lens at the Backside for the First Time With Facial Authentication Added Too

For the first time ever, Google is expected to put two cameras in the square hump of both the Pixel 4 and Pixel 4 XL. That’s not to say that the Pixel 3 XL’s rear 12MP is an underwhelming aspect of the phone because even with a single sensor, it’s able to outperform a lot of premium handsets out there, even in 2019. However, you can’t deny the advantages of a multi-camera setup. With both the Pixel 4 and Pixel 4 XL, we should expect a 12MP + 16MP configuration.

From what we’ve heard, the 16MP unit will snap lossless zoomed images, though we can’t understand why Google wouldn’t include a wide-angle camera, particularly when the company’s Super Res Zoom aids the Pixel 3 range without a dedicated telephoto lens. It remains to be seen what answer the company will have during its October 15 unveiling.

As for the front, it looks like Google will incorporate a single 8MP camera, while the rest of the bezel will house a chunk of sensors for a feature called ‘Face unlock’. Unlike the Pixel 3 XL, the Pixel 4 range isn’t expected to feature a physical fingerprint sensor or a dual-front-facing camera solution. Google is seemingly following in Apple’s footsteps and by a ‘touchless’ way of authenticating your way into your smartphone’s home screen. How secure it will be is a debate for the future. 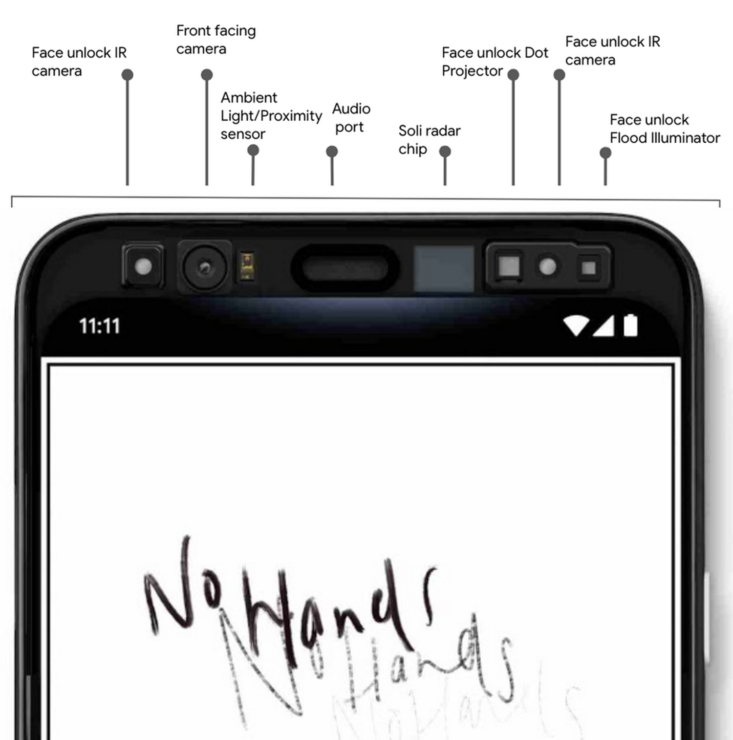 As for another feature, ‘Motion Sense’ is expected to be added to the Pixel 4 and Pixel 4 XL. Thanks to the Soli radar chip housed in the top bezel and was made possible thanks to Google’s Advanced Technology and Projects team (ATAP), simple gestures, ranging from skipping songs, silencing phone calls, and snoozing your alarm can be done just by waving your hand. Google claims that this is just the start of how customers will soon interact with Motion Sense. We strongly believe that this Soli radar chip will open up new doorways for future Pixel phones, allowing innumerable ways to interact with the display without physically touching it.

Sadly, its also a question of whether or not the feature will be available in your region. As of right now, touchless gestures will only work in a few countries, and there are limited regions where you can take advantage of the feature at this moment. It’s a small price to pay but as the feature evolves, we can see many more countries added to the growing list.

As you can see in our Pixel 4 and Pixel 4 XL vs Pixel 3 XL comparison, both upcoming models are a big step-up in both design, internal specifications and features. The obvious choice for most customers who can afford a flagship would be to upgrade to the Pixel 4 XL thanks to its larger screen real estate and bigger battery while maintaining the same hardware as its smaller brother, the Pixel 4. Then again, not all of us are so fortunate. Last year, Google introduced the Pixel 3 and Pixel 3 XL starting at $799 and $899, respectively. Maintaining the same launch price while having improved the design, adding more features and powerful specifications should make way for an interesting unveiling. 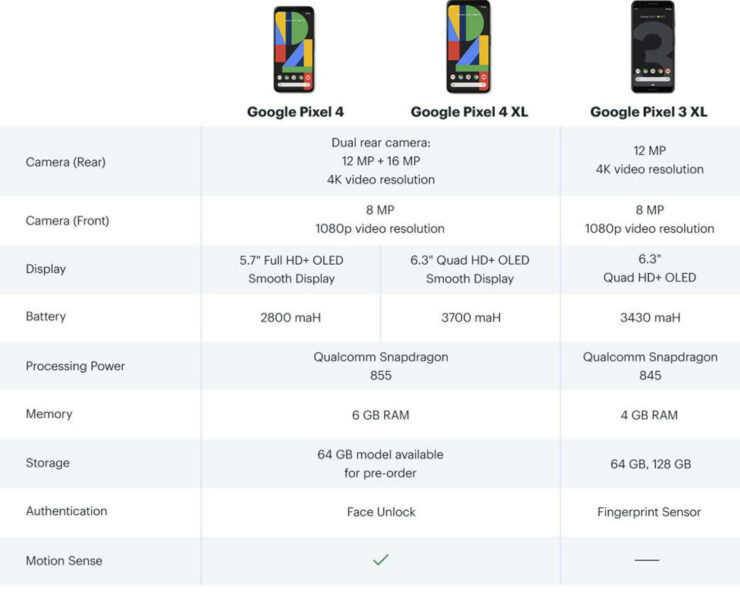 If you enjoyed our detailed comparison, do let us know by commenting below and also tell us which model you’re interested in getting down the road.