Many iOS users have yearned for Windows app experience on their iOS devices, especially on the iPad. While there have been a few tweaks to give you that experience, one upcoming iOS 7 jailbreak tweak seems to be a winning shot! 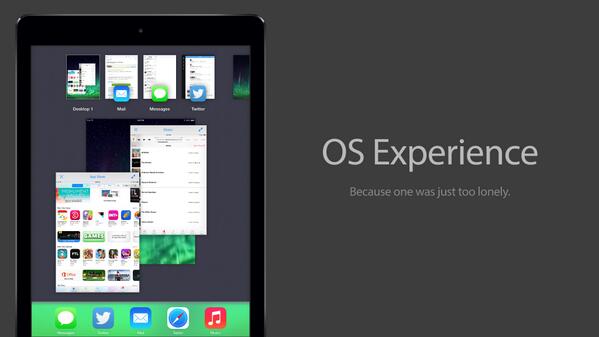 Swick has designed this tweak with resizable windows in the desktops where you can handle with tapping and grabbing on how much screen real estate you want to give to any app at a certain point of time. The tweak lets you tap and drag the top menu bar of any app to move the window around the desktop.

OS Experience iOS 7 seems to be a convenient and properly thought out tweak as handling different desktops, sizing app windows seems very natural and easier as shown in the video shared below. In the destop chooser, you can easily swipe between different desktops simply like you do with the standard app switcher.

To learn more on how OS Experience iOS 7 jailbreak tweak works, watch the video for yourself. As mentioned on the video as well, the visual issues aren't with the tweak but because of Display Recorder.

OS Experience iOS 7 tweak will probably be compatible with iPad considering the multi-screen desktop environment. We will update you when the release dates and pricing is shared by the developer.

List of Unc0ver Jailbreak Tweaks for iOS 14 – iOS 14.3 Compatible With All iPhone Models