We Might See an iOS 15 to iOS 15.1.1 Jailbreak Soon as CoolStar Confirms That the Odyssey Team is Looking Into a Kernel Exploit

A hacker @b1n4r1b01 published a full kernel exploit for iPadOS and iOS 15 to 15.1.1 derived from Brightiup's CVE-2021-30955 kernel bug write-up. Take note that it is still early to begin speculating the time frame of a potential jailbreak release. Nonetheless, it is great to see that the Odyssey team is "looking at" a kernel exploit for iOS 15 to iOS 15.1.1 for a potential jailbreak. As mentioned earlier, if things go right, we might soon see an iOS 15 jailbreak.

Odysseys team lead, CoolStar is already one of the first developers to share that the team is looking into the exploit for a potential jailbreak. CoolStar warns that the iOS and iPadOS 15 semi-untethered jailbreak would be rootless due to SSV protections and numerous jailbreak tweaks would have to be updated to work. The good part is that the Odyssey team's libhooker tweak injection method already supports iOS 15 and iPadOS 15. 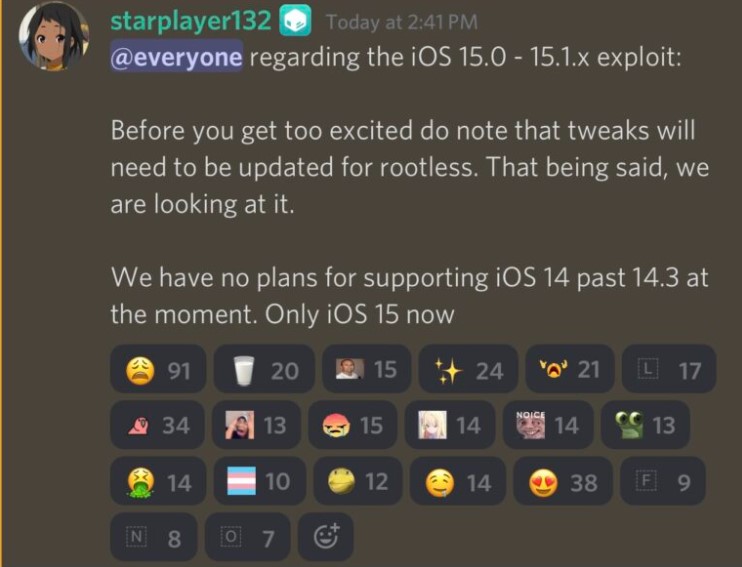 CoolStar also mentioned that the team will not release any tool for iOS 14 and all attention is being paid to iOS 5 and iPadOS 15. With CoolStar working on the new iOS 15 exploit and the Checkra1n team investigating iOS 15 and iPadOS 15 support through other means, we might see a running iOS 15 to iOS 15.1.1 jailbreak soon.

We would like to mention again that no time frames have been mentioned so far and the jailbreak teams need time to develop the required tool. Henceforth, be advised to stick around for more details as we guide you through the development stages of the iOS 15 jailbreak. This is all there is to it, folks. Share your valuable insights with us in the comments section below.