After a few slow days with no good iPhone 6 leaks, here comes quite a good potion of iPhone 6 dose. Monday brings us some helpful leaked images of iPhone 6 vs Galaxy S5 and iPhone 5s comparing the smartphones. Revealed by an Italian site, these images puts Apple's next flagship against its current glory and its biggest competitor, the Samsung Galaxy S5. 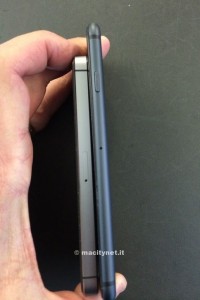 These leaked images once again confirm the rumored speculation that Apple is going with a larger display panel changing its design ideology for iPhone this year. The iPhone 6 looks a little smaller in size than Samsung Galaxy S5 in these images. The next flagship is much thinner and sleek-looking when stacked up against its predecessor, the iPhone 5s. Confirming the rumors, the Apple iPhone 6 dummy in these iPhone 6 vs Galaxy S5 and iPhone 5s images sports the Power key moved to the right hand side from the top for better one-handed usability. 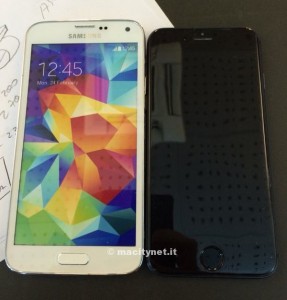 Here are the iPhone 6 vs Galaxy S5 and iPhone 5s comparative images: