Microsoft unveiled Windows 10 earlier this month skipping over Windows 9 and welcoming a new design era for the company. The new era was actually started with Windows 8 which put on a cover over the favorite old Windows operating system with a prevailing Start screen annoying many loyal consumers. Years on and users still aren't fan of Windows 8 as they were of Windows 7. Windows 8 was designed while keeping in mind the growing shift towards tablets which of course have smaller screen real estate and everything goes around apps. The thought was perhaps more inclined to that segment forgetting the loyal following of Windows that has largely remained desktop and laptop oriented. With Windows 10, Redmond made it clear that the new operating system would rectify the errors and gaffes committed with Windows 8 driving the attention back to desktops or notebooks. 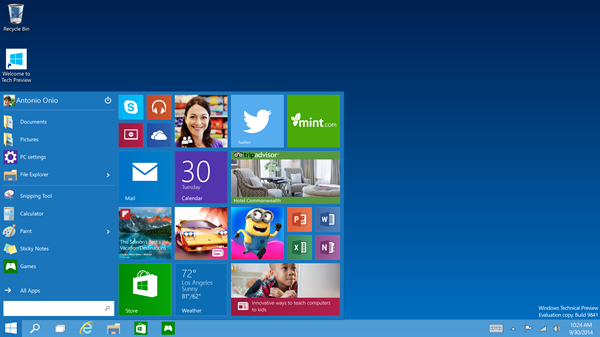 This in turn resonates with some rumors indicating that Microsoft is planning to shelve its Surface tablet series. If it does, there would be no major reason to stay put with its design ideology that irks its major consumer portion that comes from the desktops. Microsoft has definitely faced some strong competition from the mobile devices monarchs, Apple and Samsung. While Windows phones and tablets have their certain share in the game, it hasn't been able to take a leading position. Time is surely for Microsoft to turn back and start re-making with its desktop consumers.

Why you shouldn't install Windows 10 TP:

Earlier reports and analysis and simply the news that Start Menu is coming back, is making quite a lot of users to download the latest Windows 10 for their notebooks and desktops. While we realize this is a quick move to get rid of Windows 8 and get back to the joys of Start Menu, there are a few points that require you to give it a thought before you update to the latest OS Technical Preview. Here are some of the major reasons why you shouldn't install Windows 10 just now:

Microsoft doesn't release final versions of its Windows operating system too often. There is a usual break of three years in between the launches making the users quite fed up with whatever the issues may have been with the OS. This makes the installation of new Windows pretty quick and a thoughtless process. We would recommend you to not try to get on this train before you have weighed down your options or at least have a back up disc created to go back and reinstall everything.