Samsung has always adorned its Android devices with the controversial TouchWiz. The stock firmware is more often than not taken as a bad pill by the users who are otherwise in love with Samsung smartphones and tablets. Samsung TouchWiz user interface is also at times blamed to create lags and performance stubbornness on the beautiful devices including the flagship Galaxy S lineup. If the leaks, images, and rumors are to be trusted, it seems that Samsung is finally trying to move away from TouchWiz to a new UI, so far known as Iconic UX. 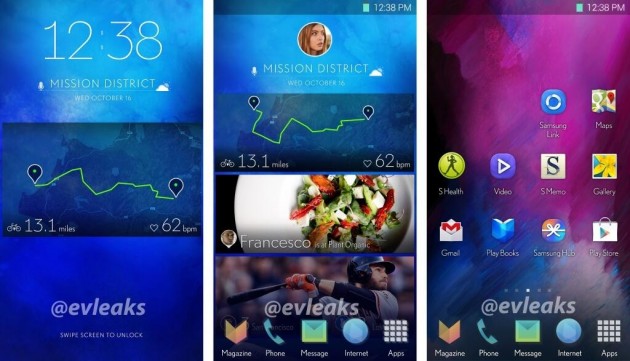 Samsung TouchWiz is not hated by everyone, however, it can definitely not be termed as a popular stock ROM. The interface is not very smooth when compared to some of other primary contenders including HTC's Sense and LG's UI. Considering Samsung's flagship lines are compared against Apple's popular iPhone series, the software then matters even more as iOS is one of the smoothest and intuitive mobile operating systems. Samsung is definitely trying to improve it with every new iteration and possibly moving towards a completely new interface in the coming year.

Rumors indicate that Samsung has filed a patent in the Korean Intellectual Property Office in March for a conceptual user interface, dubbed as Iconic UX. While March has happened some half a year ago, but apparently the screenshots of the patent are starting to emanate just now. Popular leaker @evleak had also revealed a new user interface images from Samsung earlier in the year.

Samsung Iconic UX doesn't look different at first from the TouchWiz, however, it has incorporated a lot of changes and different navigation methods. The patent illustrations of Samsung Iconic UX show a new paradigm focusing on verticality, widgets, and show a new tile-shaped menu division. The user interface looks cleaner and properly spaced presented with a vertical scroll.

Samsung quite possibly be working on a new user interface to better incorporate with the wonders of Android 5.0 L. The upcoming Android iteration is a major shift from the current software paradigm and various OEMs will be working to redo their own user interfaces. It is still uncertain though if Iconic UX is actually a replacement for Samsung TouchWiz or not. If it's legit, we hope to see some better images and interface running on different test devices in the coming months.