In for Some Fun? Download Official Windows 10 Ninjacat Wallpapers

No matter how much loss Microsoft has incurred this year, as revealed in Q4 FY15 earnings call, it is certainly going to have some major profits once Windows 10 hits the devices. Folks at Microsoft managed to keep the hype up around the upcoming Windows which will be working as a service with Insider builds releasing every week, and sometimes even more frequently. Now that we are almost done with the PC Preview builds as Redmond signed off release to manufacturing, company is trying to not let the hype die down with more pleasant capers. 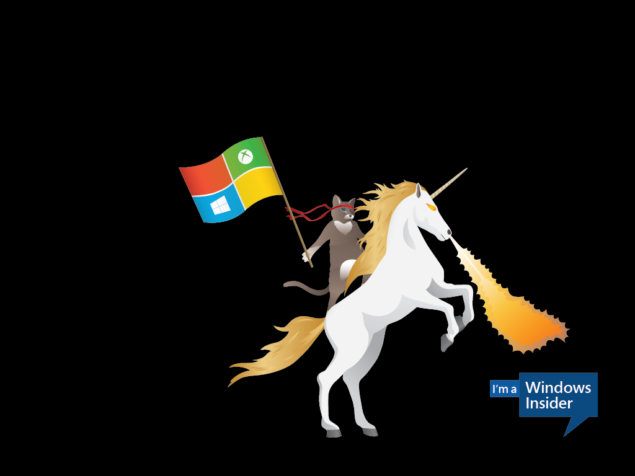 Following up with Insiders taking interest in the ninjacats, Microsoft has now released a number of wallpapers [for earlier wallpapers, download links here] featuring these cats riding on mythical beasts. These images have been released after Microsoft noticed, "Windows Insiders having a lot of fun with a particular cat… the ninjacat. It’s been so fun to see Insiders rally around the ninjacat as a fun icon for Windows 10 and for Microsoft." Now that Microsoft has managed to successfully smooth the Windows 10 experience killing thousands of bugs, it seems that the company is ready for some celebration as it "came up with a couple new cats and steeds."

You too can download these wallpapers / home screen images fitting with your screens. Here are the links as shared by Microsoft:

The latest Windows 10 Insider build 10240 has apparently received the "highest-satisfaction rating of any build" so far released based on the pop-up surveys that the company uses for Windows Insider feedback. As we make our machines ready for the Windows 10 adoption, don't forget to download these Windows 10 Ninjacat wallpapers where ninjacat is proudly riding three steeds including a fire breathing unicorn - unicorn! Personally, I believe Tyrannosaurus Rex wins over everything else.

Download All the Latest Windows 10 Mobile Wallpapers in HD