The premise of E3 2019 wasn't exactly the most enticing. Sony pulled out for the first time in the show's history and other publishers/developers opted to keep most of their aces hidden (we're still waiting for Rocksteady to unveil their new game, for example, four years after the launch of Batman: Arkham Knight). With next-generation consoles announced to launch in late 2020, it was easy to think of this year's Electronic Entertainment Expo as a minor showcase compared to previous and future shows at the Los Angeles Convention Center.

As is often the case, though, reality proved to be a different beast altogether. Our intrepid team of four editors (Kai Powell, Nathan Birch, Francesco De Meo and myself) saw and played a huge list of promising titles due in the next twelve months or so. Of course, that also means when the time came to deliver our Wccftech E3 2019 Awards, we had to make some difficult choices.

However, we ultimately had to pick the games that impressed us the most during their often brief showcases. That's not to say other titles won't prove to be superior once they launch - E3 is, after all, just a preview event.

For now, though, and without further ado, here are our E3 2019 Awards!

(Francesco De Meo) Games like Prince of Persia, Flashback, Another World and the original Oddworld: Abe's Odyssey are among the classic games I like best, so I am more than a little disappointed that no developer has tried in the past few years to make a modern version of these platform/adventure games. Thankfully, my disappointment has faded completely when I played Oddworld: Soulstorm, as the game is even better than I could have imagined.

While Oddworld: Soulstorm is very close to the experience we enjoyed in Oddworld: Abe's Exodus, the game is also much more, with so many new features that modernize the experience without altering what made it great in the first place. The team is putting a lot of effort and passion in the project, and it definitely shows: the platforming, the puzzles, the presentation are looking great already, and I really cannot wait to see the finished product to delve deep into it and quench my platform/adventure game thirst that has been accompanying me for so many years.

Oddworld: Soulstorm will launch next year. In the meantime, check out our preview from E3 2019.

(Nathan Birch) Have the last few Paper Mario games left you a bit, well, flat? Well, you need to check out the promising new action-RPG Cris Tales. First off, the game is gorgeous, featuring unique, beautifully-animated visuals inspired by Disney classics and the culture of Columbia, where the game’s small 20-person development team is located. Cris Tales isn’t just a looker though, it also features a clever time-travel element, which lets players peer into the past, present, and future at any time. This mechanic is used to solve puzzles and add an exciting extra layer of strategic depth to the game’s Paper-Mario-style battles. After watching a demo and chatting with the game’s enthusiastic developers, it’s clear there’s a huge amount of genuine passion behind this project. Cris Tales’ mechanics and gameplay look rock-solid, but it’s the game’s heart that ought to make it really special.

Cris Tales debuts next year on PC, PlayStation 4, Xbox One and Nintendo Switch. A free demo is already available on Steam. 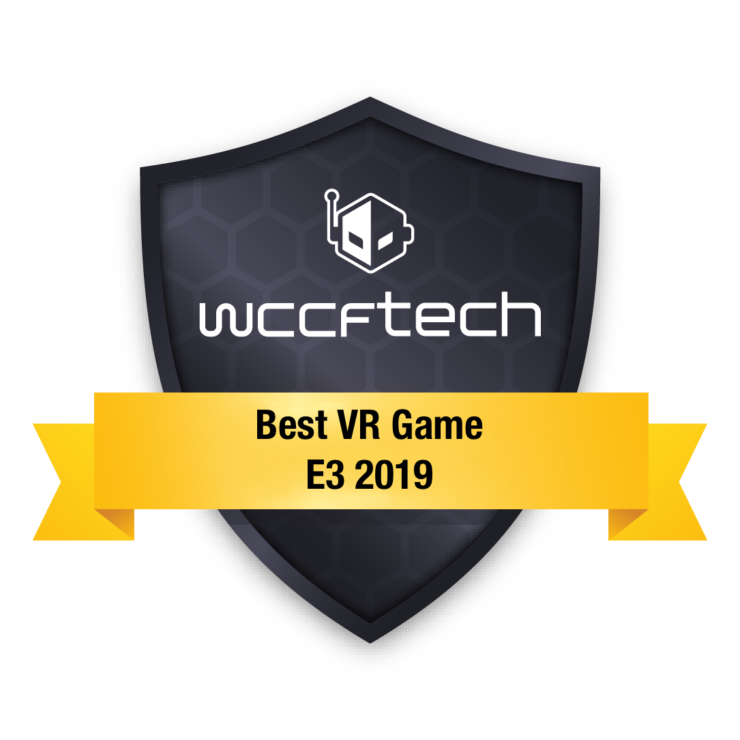 (Kai Powell) The VR platform has been growing with new experiences and some familiar sequels. To really stand out on the platform, sometimes you have to take a concept that sounds absolutely daft on paper and just run with it, or in this case, float with it. For our official selection of Best VR Game of E3 2019, I nominated Phantom: Covert Ops, a stealth shooter where players sneak their way through enemy compounds on a kayak.

Phantom: Covert Ops is a completely seated experience where everything that you’ll need to breach the enemy compound is neatly at hand. Pistol, submachine gun, sniper rifle, and various amounts of explosives are all neatly packed in your kayak and intuitively easy to reach out and grab as the situation demands. The other thing that truly stood out to me with Phantom: Covert Ops is just how realistic and fluid the kayaking was. The developers talked at length about trying to achieve 1:1 control with the kayak and it certainly showed. Truth be told, Phantom: Covert Ops might be the best kayaking simulator available in VR and the Splinter Cell-esque espionage is only an added bonus.

The game is being developed by nDreams and will launch later this year on the Oculus Rift and Quest.

(Kai Powell) Final Fantasy XIV and I have had an extended hiatus from one another, with the media preview event last month being my first time controlling a Bard since months after the PS4 launch. That’s an eternity of content to tackle and play through, including numerous title updates and two expansions, in preparation for Shadowbringers. However, that combat, with all of the numerous updates and changes to how each class performs, has been pulling me back in for the past couple of weeks.

Final Fantasy XIV: Shadowbringers, slated to kick off early access this weekend, brings with it two new classes, new races to customize and play dress up as, and a whole new area/time period to explore in The First. There have been a lot of tweaks to normalize the classes and make it more accessible for new/returning players like myself and the more I keep playing through the new content to come in Shadowbringers, I have to keep asking myself why I stopped playing in the first place.

Final Fantasy XIV: Shadowbringers is out July 2nd on PC and PlayStation 4. Read our interview with Naoki Yoshida to tide you over until then.

(Nathan Birch) Few expected Doom co-creator John Romero’s next game to be a turn-based strategy/sim. Fewer still expected said strategy game to focus on 1920s Prohibition-era gangsters. To be clear, John was quick to point out to me that Empire of Sin is actually the passion project of his wife, Brenda Romero, who has experience working on strategy games like Jagged Alliance. Apparently, Brenda has been trying to pitch Empire of Sin for 20-plus years, and her enthusiasm for the subject matter really shines through. 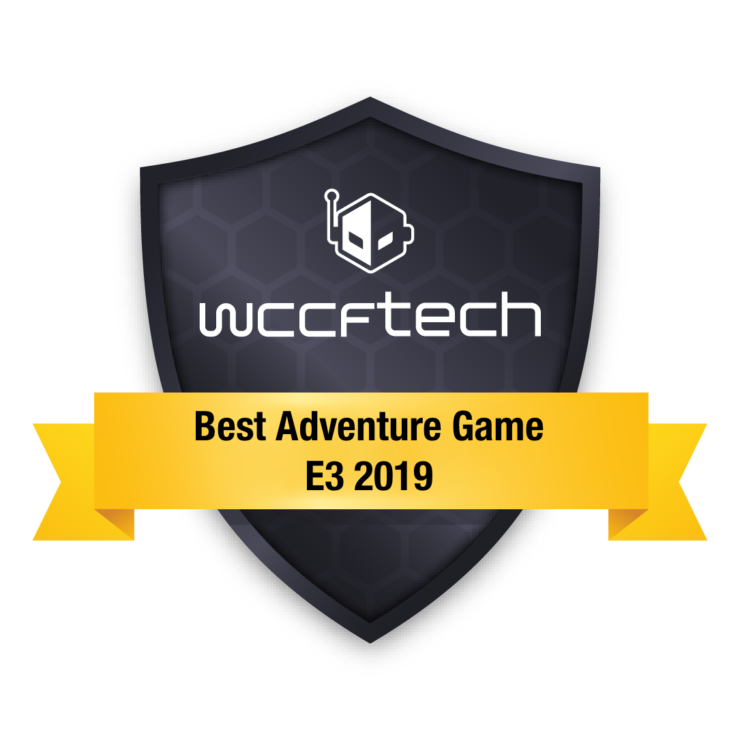 (Nathan Birch) Man of Medan looks to be the successor to Until Dawn horror fans have been waiting for. While it’s fairly clear Medan will be a somewhat smaller, more restrained experience than some of the games released by Supermassive in the past, their mastery of tension and tech has managed to survive a budget slashing. The studio’s total lack of shame also carries over intact, with plenty of 80s-horror-style cheese and titillation also carrying over. Don’t worry, it’s all part of the charm. Adventure games don’t always show well on the noisy E3 show floor, but Man of Medan’s demo kept me glued throughout – it should be even more enthralling played at home with the lights low.

The Dark Pictures: Man of Medan is out on August 30th for PC, PlayStation 4 and Xbox One.

(Nathan Birch) Even if Doom Eternal was strictly more of the same, it still would have been a top contender for best shooter of E3 2019. 2016’s Doom revival was a fine-tuned demon-smashing masterpiece that didn’t really need much improvement. Thankfully, id Software is adding all sorts of small but meaningful elements to their latest shooter, including the new grappling hook shotgun and the Flame Belch ability that makes enemies shed piles of armor power-ups. In addition to these meaningful tweaks, Doom Eternal is simply a bigger, badder, more metal experience than its predecessor. This is a game where you get to Mars by shooting yourself out of a giant cannon. It’s hard to believe another 2019 shooter will be as much straightforward grisly fun as Doom Eternal when it comes out on November 22nd for PC, PlayStation 4, Xbox One and Nintendo Switch.

(Alessio Palumbo) With the game due to release in just a couple of months, Remedy brought a new demo to E3 (you can see some gameplay we've captured on YouTube). The demo showcased some impressive graphics thanks to real-time ray tracing, however it was the combat system that caught our attention the most. Even with almost all of Jesse's powers still locked, Control reminded us of Psi-Ops, a now long-forgotten game from the PlayStation 2/Xbox era which was memorable at the time for its combination of telekinetic powers and physics-based environmental interaction.

Control's combat feels great while playing and it's also quite challenging. Game Director Mikael Kasurinen told us there won't be any automatic health regeneration for protagonist Jesse Faden, with the goal to encourage players to play aggressively as the only way to regain health will be to defeat enemies (which drop some orb-like health pickups). It won't be long now until we get our hands on the full game, as Control is coming out August 27th on PC (Epic Games Store), PlayStation 4 and Xbox One.

Most importantly, the presentation convinced us that this goes as deep into the Western roleplaying tradition as possible, with the player able to decide almost anything on how to customize the main character, how to deal with companions, potential allies and foes and the world as a whole. With Private Division (and Microsoft, too, in all likelihood) helping with Quality Assurance, we may also get one of the least buggy Obsidian RPGs to date.

Long story short, we can't wait for October 25th to hopefully bring us a great Sci-Fi RPG from one of the most acclaimed roleplaying games making studios. Meanwhile, check out our talk with Senior Narrative Designer Megan Starks for more juicy details on The Outer Worlds.

(Alessio Palumbo) Cyberpunk 2077 made another mightily impressive behind-closed-doors appearance at E3 2019, after 2018's debut. Everything we all saw (yes, it's the only game all of us had to book to see for ourselves) points to the first-person action RPG/shooter being able to fulfill the incredible hype surrounding it. To begin with, Night City already looks incredible even if CD Projekt RED reassured us visuals (and performance) will improve even further by the game's 16th April 2020 release date.

Beyond the shiny graphics, the studio behind The Witcher 3 demonstrated the breadth of options available to players in this game, something that was inevitably precluded with Geralt of Rivia as the titular witcher in their previous trilogy. The developers seamlessly switched from a stealth-specced male V to a brutish melee oriented female V with cybernetically-enhanced arms. Needless to say, these two opposite approaches outlined the far greater flexibility in quest design achieved by the developers with Cyberpunk 2077.

They've also clearly nailed the atmosphere of the setting created by Mike Pondsmith (who, by the way, was hanging in the gorgeous cyberpunk-themed booth set up by CD Projekt RED). From what we could gather based on the E3 2019 demo, writing feels as good as we recall from The Witcher 3 and its expansions. Besides, with Keanu Reeves (V's digital ghost-guide) confirmed to be the second actor with the most lines in the whole game, even the story presentation looks absolutely top-notch.

For now, nothing seems able to top Cyberpunk 2077 as the game with the biggest hype behind it.