For the record, I want it to be known that prior to the game’s release I was the biggest DOOM doubter. I was convinced that id Software would be unable to recapture the majesty of the run-and-gun shooting that is the original DOOM in the modern day. FPS games have progressed, graphics go farther than pixelated sprites, and guns all aim-down-sights now, without exception. It’s with all this in mind that I watched DOOM trailers, saw what I felt were long, needless kill animations in a game that should be about ridiculous guns and ridiculous amounts of enemies. Even when the multiplayer beta opened up, I played it and said; “This is awful. What a tragedy.”

Then I played the single player.

I can only imagine that the devs at id spent months, potentially even years, just attempting to recapture the feel of how DOOM moved. It’s so retro, so out-of-date that theoretically it just shouldn’t work in 2016. Sprites flying about the screen, strafing in between columns and platforms in order to shield yourself whilst letting off as many bullets as possible – antiquated by today’s standards, but somehow DOOM does a great job of rekindling those long-dormant feelings of speed and intensity that came with DOOM’s more heated levels.

The method id uses to take you back to the early 90s is actually fairly genius – the massive hordes of DOOM gone by are mostly gone, replaced with fewer enemies. Immediately you’d be forgiven for thinking this is a step in the wrong direction, but it actually works marvelously. The main feeling of nostalgia for retro DOOM is brought about not by body count, but by speed. The crowds of enemies are smaller now, but they’re also much more able to kill you, much more mobile as they run and climb about DOOM’s arenas, and there’s a pretty big selection of demons to get to know. Speed is necessary, as stay in one place for a few seconds too long and you’ll die.

You need speed here – and thank goodness that DOOM Guy’s base speed is pretty nippy – to get rid of enemies before they manage to surround you. This forces you to run in, shoot, hit enemies with a melee attack, activate a Glory Kill, keep moving, keep all of your corners checked, never stop. And when a larger enemy gets thrown into the fray, your moment-to-moment decision making is what will keep you alive. Say your health gets mostly depleted by an attack you didn’t see coming – do you run for cover? You could, and hope you into health items, or you could go on the offensive, get as close as possible, and trigger an enemy stun animation for a Glory Kill, which will often result in a nice health bonus, along with ammo. 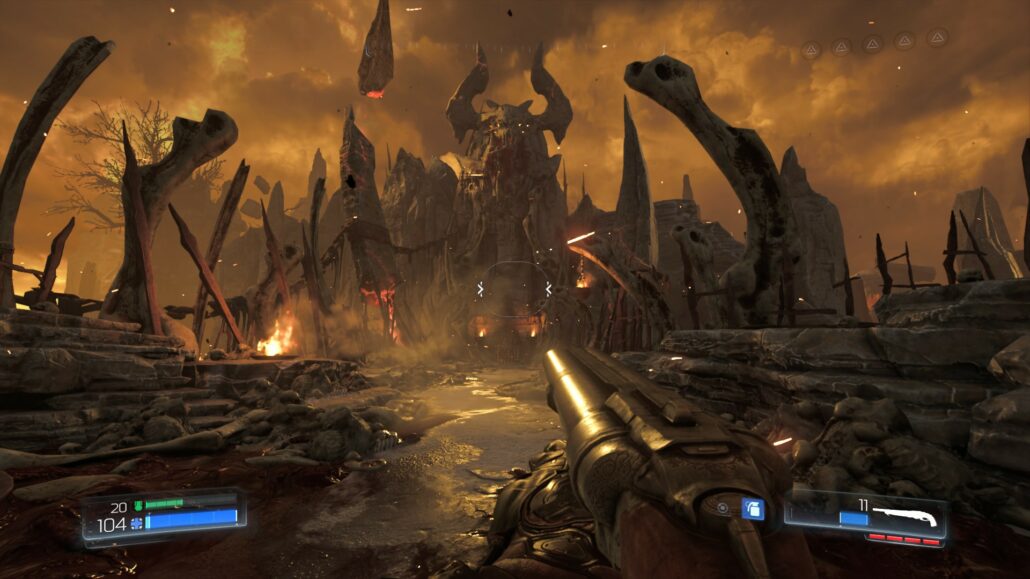 Everything I’ve described thus far is very self-explanatory – you shoot demons, walk quickly, and occasionally get the chance to do a flashy kill animation. But DOOM is more than the sum of its parts, and anyone with a mildly nostalgic love for classic DOOM will likely find a lot to love here. There’s an abundance of hidden secrets in every stage – ranging from fun little DOOM Guy toys, to hidden switches and of course bountiful power-ups. Like Haste, which makes you walk even faster, and the one that quadruples all damage you deal which makes me immediately reach for the explosives.

There are some absolutely incredible pieces of weaponry at your disposal – that is once you get past the underwhelming Pistol you begin the game with. The Shotgun is a staple of any shooter, but the Super Shotgun is a DOOM hallmark. What DOOM does to keep all its weapons relevant – again, save for that starting pistol – is the upgrade tree. You can unlock new weapon abilities from drones you find in the game world, and then upgrade them with Weapon Points you earn through combat. Some of the later upgrades to these weapons are fantastic, with the Shotgun remaining a competent weapon you can rely on throughout the game thanks to the upgrades you can give it. A charged explosive shot is a good place to start, and once its explosive upgrades have been maxed out, even late-game demons will fall to a few well-aimed direct-impacts.

All of this without talking about how DOOM looks and sounds. It’s safe to say that the original is iconic in the most literal sense – DOOM Guy’s pixelated face sprite moving his eyebrows about on the lower portion of the screen is truly recognizable, and all I need to hear are the first few notes of the original DOOM’s main theme before immediately knowing and loving what I’m hearing. DOOM in 2016 is not iconic, however it is bombastic and bold. Brutal, heavy metal tunes crack out of your speakers as you hop about arenas shooting down demons and it empowers you, makes you feel alive – especially when ripping off a demon’s arm and killing him with it. The music, harsh and unforgiving, is the perfect audio accompaniment to this grotesque display of offense on screen.

Graphically, DOOM looks gorgeous, but there’s nothing really to celebrate here. Inside Mar’s scientific space bases everything looks… Well, future-y and space-y. At first glance, it looks like a darker Halo or something. Unfortunately, it’s just nowhere near as iconic as the sprites of early DOOM games, but there’s nothing wrong with it. The game looks great, demons looks monstrous, environments look like they could actually exist, but in terms of design direction and style it’s… Well, it’s fine. It’s serviceable. But that’s the extent of it. Perhaps id chose to keep things simple for the sake of performance, which is possible. My GTX 980 Ti easily rendered indoor areas at 144FPS, while larger outdoor areas still stayed well north of 120FPS – gamers with high refresh rate monitors will be pleased. 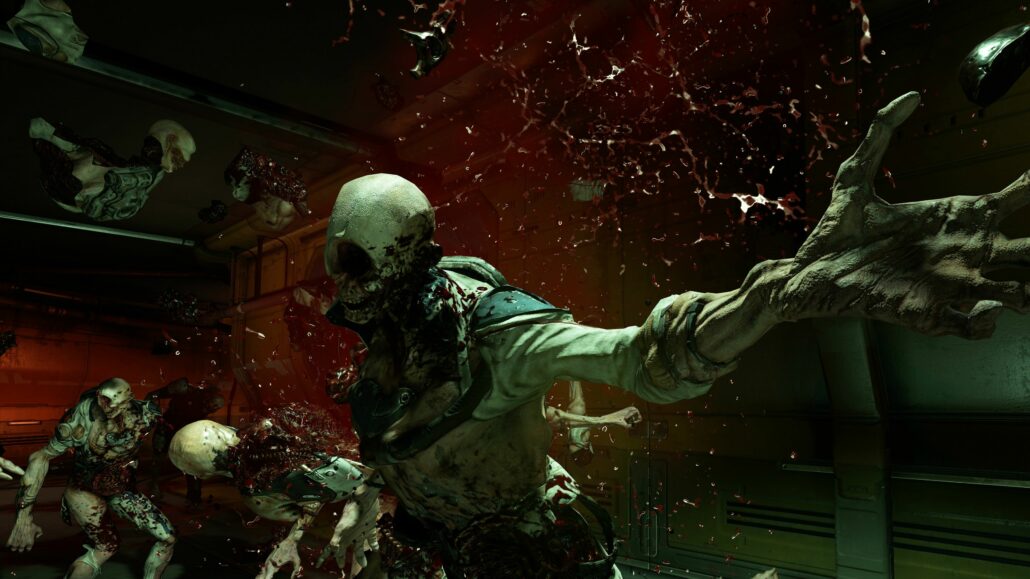 So then, what is there to complain about with DOOM? Well, for one the multiplayer still kind of sucks. Bland, uninspired, boring, all of those things and not much more. Stage design is serviceable, guns work just as well in multiplayer as they do in single player, but they lose all of their impact. It’s honestly a struggle to really enjoy the game in multiplayer, because the run-and-gun nature of DOOM feels like a sub-optimal strategy in comparison to the more standard FPS tactics of stick to cover and shoot when you can. Unfortunately, DOOM’s speed doesn’t translate so well into multiplayer which for me puts this mode into the afterthought category.

SnapMap works really well, at least. It’ll be a fun diversion for some, or a time-eating monster for others, but for me it was just a small bonus. Map creation works well and reminds of spending hours in games like Timesplitters 2 just creating crazy levels – but unfortunately, the amount of time I can spend creating levels for games instead of actually playing them these days is fairly limited, and so it the amount of enjoyment I could glean from SnapMap.

If you've been searching for a bombastic single player FPS, then you need not look any further than this new DOOM game. If you want a special multiplayer experience, though, DOOM doesn't deliver as well.