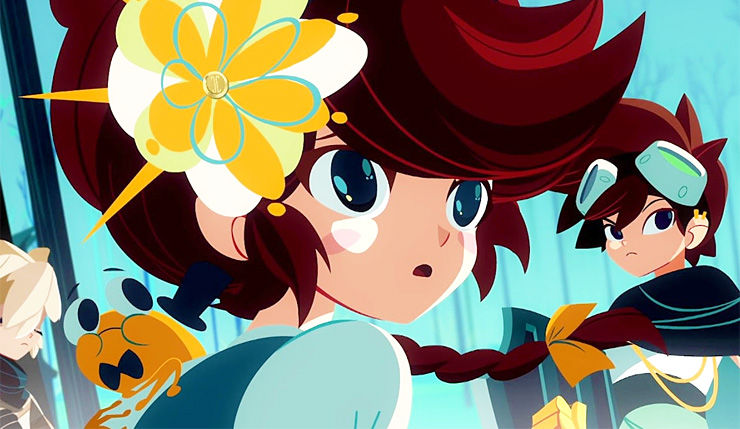 Paper Mario has lost the sharp edge it once had. While not without their charms, recent Paper Mario entries like 2012’s Sticker Star and 2016’s Color Splash have drastically toned down the series’ RPG elements and writing, leaving many players, well, flat. Well, if you’re one of those fans pining for the glory days of The Thousand Year Door, you need to get Cris Tales on your radar immediately.

Primarily developed by small Colombian studios SYCK and Dreams Uncorporated, Cris Tales wears its Paper Mario influence on its sleeve, boasting a stylized 2.5D world and a turn-based battle system with light action elements. That said, Cris Tales also brings its own unique qualities to the table. First off, the game is absolutely gorgeous, featuring an art style inspired by Disney movies, Cartoon Network favorites, and the developers’ homeland. According to Dreams Uncorporated’s charmingly enthusiastic boss Carlos Rocha Silva, the game is packed with references to Colombian culture, landmarks, and architecture. Even the game’s name is likely a clever reference to Columbia’s iconic multicolored Caño Cristales river. Cris Tales doesn’t just look nice in screenshots, it also moves beautifully, as most of the game is hand-animated frame-by-frame. This project certainly doesn’t look like the work of 20-or-so people making their first high-profile game. If somebody had told me this was a Nintendo title, or perhaps one of Ubisoft’s artsy passion projects, I’d have believed them. 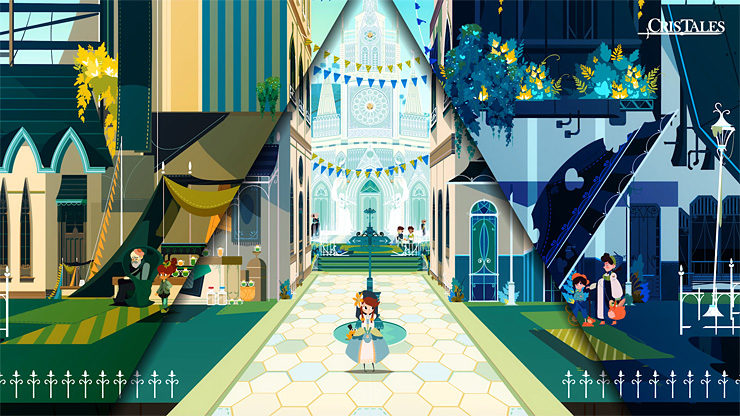 Ah, but Cris Tales isn’t just a looker, it also offers some unique mechanics. The game casts players as Crisbell, an orphan and newly-christened Time Mage, who’s on a quest to stop the Time Empress from rewriting the future. So, yes, as you likely gained from the previous sentence, Cris Tales revolves around time travel, which is hardly an RPG first, although the game handles it in an interesting way. As you explore the world as Crisbell, the screen is divided into three panes that move with you – the one on the left shows the past, the middle is the present, and the right one is the future. This is all seamless, so, for instance, as you walk past an NPC, you may see them transition from a child, to an adult, to an old man as they pass from one pane to the next. On a basic level, it’s a cool, technically-impressive trick, but the three simultaneous timelines also allow for some interesting puzzle design.

During the gameplay presentation I was shown, Crisbell comes upon a house, which we see in a state of sad disrepair in the future. It turns out wood rot is to blame, which Crisbell can head off with an anti-rot potion made from a specific mushroom. Ah, but to get said mushroom, she’ll need to alter the past slightly. Crisbell can’t time travel herself, but her magical frog companion Mathias can in order to make small changes (in a cute touch, he turns into a tadpole in the past and a gnarled old toad in the future). The puzzle I was shown was fairly straightforward stuff, but the potential for more complex headscratchers is definitely there. 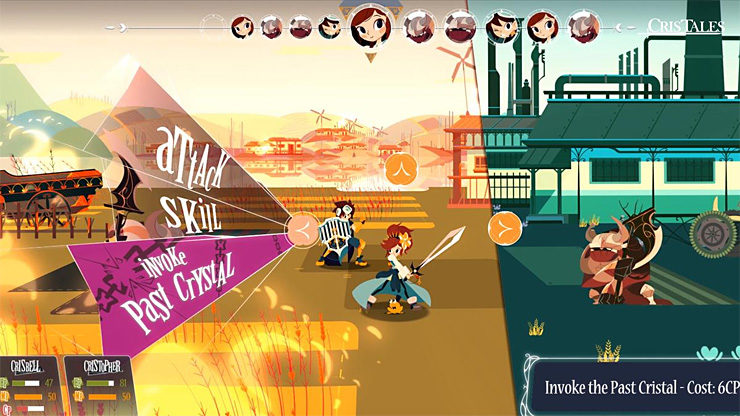 Time-travel mechanics also apply to Cris Tales’ combat in a variety of clever ways. During your turn, you have the option to use a Time Crystal to wind time forward or backward. Going back has obvious benefits if you’ve made a strategic error, but going forward can be helpful too. For instance, you can apply a “burn” status effect to an enemy then jump forward in time inflicting several turns worth of burn damage all at once. At the end of the demo, Crisbell and friends encounter a boss wielding a large impenetrable shield, but you can apply a “wet” status effect to it with a water attack, then jump forward, causing the shield to become rusty and breakable. Aside from these tricks, your opponents will also age as you tinker with time, with different results depending on the enemy. Winding time forward might make your adversaries slower, but it may also increase their magical ability. Alternatively, some enemies may lose magical attacks, but gain strength and vigor as you go back in time.

The one thing I didn’t get much of a sense of from the E3 presentation is Cris Tales’ story, although there’s reason to be optimistic. The game is fully voice acted, with Crisbell being played by Kira Buckland (2B from Neir: Automata) and experienced writers are helping with the game’s dialogue. The game looks to be similar in scope to the Paper Mario games that inspired it, with plenty of sidequests to keep players busy, so hopefully Cris Tales’ story and world can crystallize into something special.

I’m always happy to support games from parts of the world not traditionally embraced by the video game industry, particularly when they’re as seemingly well-crafted and heartfelt as Cris Tales. This Colombian-developed tribute to Paper Mario and other classic JRPGs is equal parts beautiful, charming, and inventive, so plan to make some time for time travelling next year.

Cris Tales is scheduled to hit PC, Xbox One, PS4, and Nintendo Switch sometime in 2020. A free demo of the game is currently available via Steam.