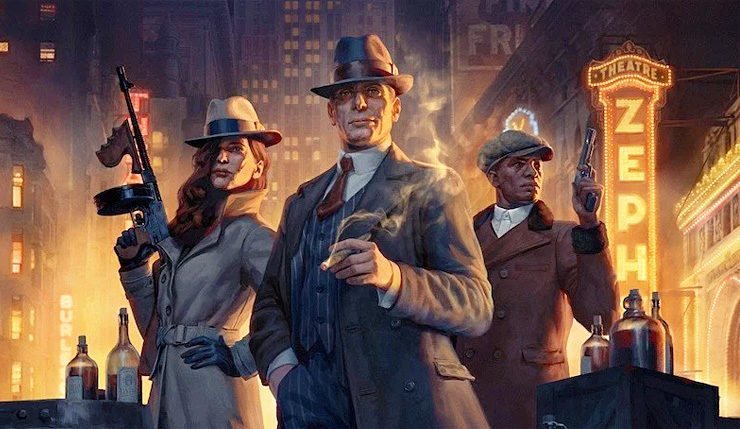 Earlier this year, Romero Games took fans by surprise when they announced they were teaming with Paradox Interactive on a new strategy IP. They surprised those fans again at E3 2019, where they revealed said strategy game would cast players as gangsters vying for power in 1920s Prohibition Era Chicago. That said, Empire of Sin isn’t as much of a departure as it might seem, as this is really a Brenda (not John) Romero game. Brenda has a history with strategy games, as she was head writer for Jagged Alliance 2, and has been pitching Empire of Sin for literally decades. So, there’s actually a lot of passion behind this project, but is it a true gangster’s paradise?

At E3 2019 I got to watch a demo of Empire of Sin, and I walked away pretty excited to build my own booze-soaked criminal kingdom (so much so, that we named Empire of Sin the show's best strategy title). Empire of Sin is essentially two games in one – a full-fledged gangster sim and an XCOM-style tactical strategy game. The business side of things involves the running of various shady operations, including speakeasies, casinos, and brothels, which can be upgraded and customized to your tastes. Of course, alcohol is the fuel that keeps your criminal enterprise running, so you also have to keep an eye on your various brewing operations. 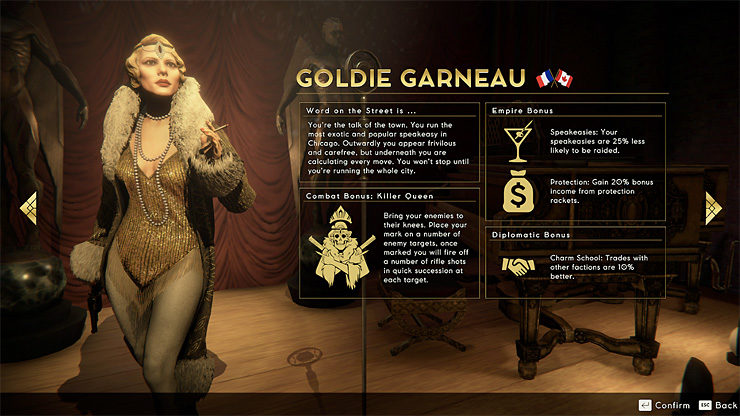 In addition to the basic economic side of things, there’s also an RPG element to the game. At the start of a game, you can choose from 14 different bosses, including iconic names like Al Capone, and eventually enlist up to 16 underlings from a selection of 60. Organization is important, as you’ll have to choose an underboss, with each character bringing different qualities to the job. Interestingly, your gang members won’t just interact with you, but each other, with unique relationships, and even romances, springing up between your underlings. Some of seemingly-loyal followers may even become police informants. Needless to say, you may need to clean out your ranks ever now and then.

As for your criminal rivals, Romero Games is promising active, responsive AI, which will compete amongst each other even when you’re not involved. Just because a rival isn’t bothering you at the moment, doesn’t mean they’re not making their own moves to win the game! When you come into conflict with another gang, you can solve your differences with bullets, or you can arrange a sit down with their boss, during which you’ll be presented with various dialogue options. Make the right choices and you might avoid conflict, but obviously, sometimes a little bloodshed is unavoidable. 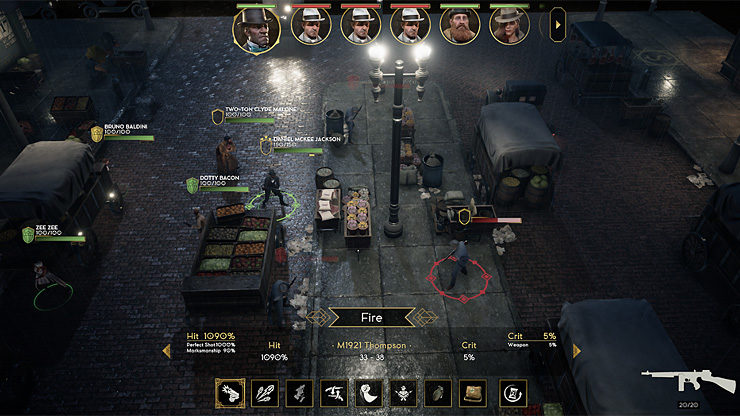 I didn’t get to see as much of Empire of Sin’s XCOM side as I did its sim elements, but combat looks solid enough. In additional to tommy gunning enemies down from afar, you can also get in close for gruesome finishing moves (a very Romero touch). The game’s RPG mechanics also apply to combat, with all your gang members having certain traits that may help or hinder you in battle, and they’ll change in unexpected ways as the game progresses. If you’ve been using one guy to do most of your killing, they may gain a reputation for being bloodthirsty, which will affect how they interacts with other characters. Outside relationships will also be dragged into combat – if two people in a romantic relationship find themselves on opposing sides, they may refuse to fight.

Overall, it looks like Empire of Sin will combine depth with plenty of that Prohibition Era charm. After viewing the demo I got to chat with John Romero and Empire of Sin game designer Ian O’Neill about the game’s real-life gangsters, modding, whether the BFG 9000 is in the game, and more!

You don’t see too many games about gangsters these days. What inspired Romero Games to pursue the subject matter with Empire of Sin?

John Romero: Brenda [Romero] is the lead game designer on this one – this is her game. She has wanted to make this for about 20 years as it combines her love of Civilization Revolution, X-COM, and her favorite time period and location, 1920’s prohibition in Chicago.

What kind of research went into capturing that 1920s setting? Besides Al Capone what real-life figures can you play as/meet/rub out?

JR: Exhaustive research is definitely something the design team had to do for a long time to fill out all the interesting details that players will experience. We have other real crime bosses like Joe Saltis, Daniel McKee Jackson, and Stephanie St. Clair, as well as newly created bosses like Frankie Donovan, Frank Regan, and Goldie Garneau.

The strategy genre tends to be fairly polite, but Empire of Sin isn’t shying away from risqué material or violence. Do you think fans of the genre are ready for something a bit edgier?

JR: Absolutely! We’re pulling no punches with Empire of Sin’s gritty, noir setting. We have a great VFX team working on all kinds of horrifying things.

Modding has been a big part of some of your most successful games. You just released a new megawad for the original Doom! Will there be a creative/modding element to this game?

JR: Definitely. Empire of Sin’s engine was started from the ground up to be a moddable architecture. The game can be fully modded on the PC, including programming. We will be releasing lots of the game’s Lua code as a starting point for modders.

Aside from just making a lot of ill-gotten money, is there a specific end goal to Empire of Sin? How free are players to set their own objectives?

Ian O’Neill: To become the King or Queen of Chicago. That’s it. That’s your goal. How you go about that is all down to you and what type of strategy you want to employ. You can go in guns blazing or take a step back and try your hand at diplomatic relations with the other factions. But there’s only ever one person at the top. 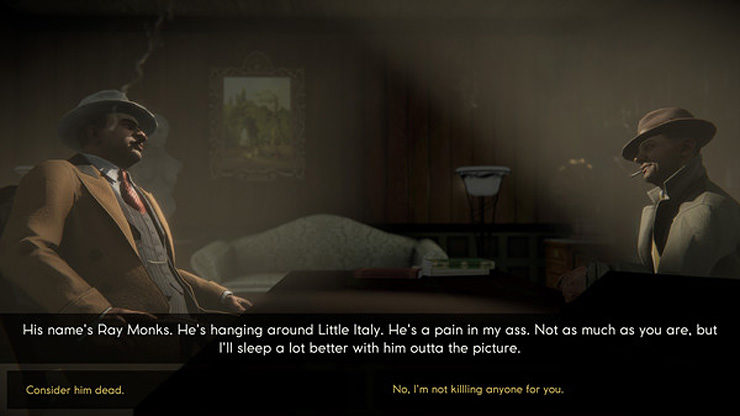 About how long would you say the average game will be? How are you encouraging replay?

To what degree can the player affect the game’s virtual Chicago? If you’re really unscrupulous or violent, will you start to see the effects on the streets?

IO: Well, for a start the city’s own factions aren’t going be too friendly towards you. The Cops, Bureau of Internal Revenue, and Bureau of Prohibition are there to remind you that there’s always a bigger fish. If you get a little too trigger happy, then the Cops are going to show up and then what? Do you kill the Cops or run from combat and lose whatever you were fighting over in the first place? Having an entire city of angry Cops makes moving around and operating a criminal empire fairly risky.

How reactive is the AI? What kind of unexpected responses might you encounter? Will the various factions fight amongst themselves?

IO: Indeed they will. You’re not alone in your goal. Each of the other Bosses is vying to become the King or Queen of Chicago. And how they go about their business might surprise you, they’ll make allies with other factions or trade between them if they’re short on supplies or booze. Keeping tabs on what’s going on in Chicago is vital to your survival.

Can you be a dirty rat and help out the cops?

IO: You can’t, not intentionally, but your RPCs can! Moles exist in Empire of Sin and having a mole inside your crew can cause you serious issues. Rackets being raided unexpectedly or one of your breweries being shut down by the BoP. These are just a few of the headaches that a mole in your crew might cause and it’s up to you to try and figure out who’s the rat. 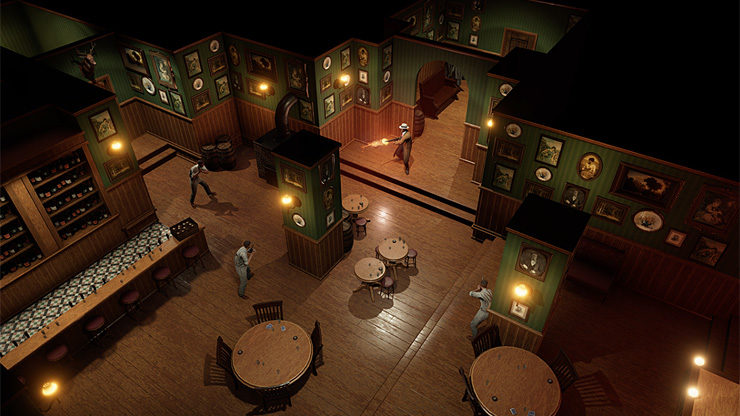 If a player is more of a sim fan, is there an option to skip or automate battles? And what about the opposite? Can you focus on battles and streamline the empire management stuff?

IO: Absolutely, you can auto resolve fights if they’re not your cup of moonshine, but you’ll want to make sure that the deck is stacked in your favor! As for your empire, you can easily manage the entire thing from the empire screen and the world map.

Any plans for additional monetization? A real-money fedora store?

JR: Empire of Sin will continue to be updated through DLC. That and anything else beyond it is up to Paradox and their amazing marketing team to explore.

You’ve announced for pretty much every platform. Is a Google Stadia release being considered?

JR: The platforms we’re releasing on are the ones that were described at E3 – PC [note: that includes Steam], Mac, Switch, Xbox One, and PS4.

JR: Not the one from Doom, but Empire has its own BFG...

I look forward to writing my name with that! Thanks for your time!

Empire of Sin takes over PC, Xbox One, PS4, and Nintendo Switch in early 2020.