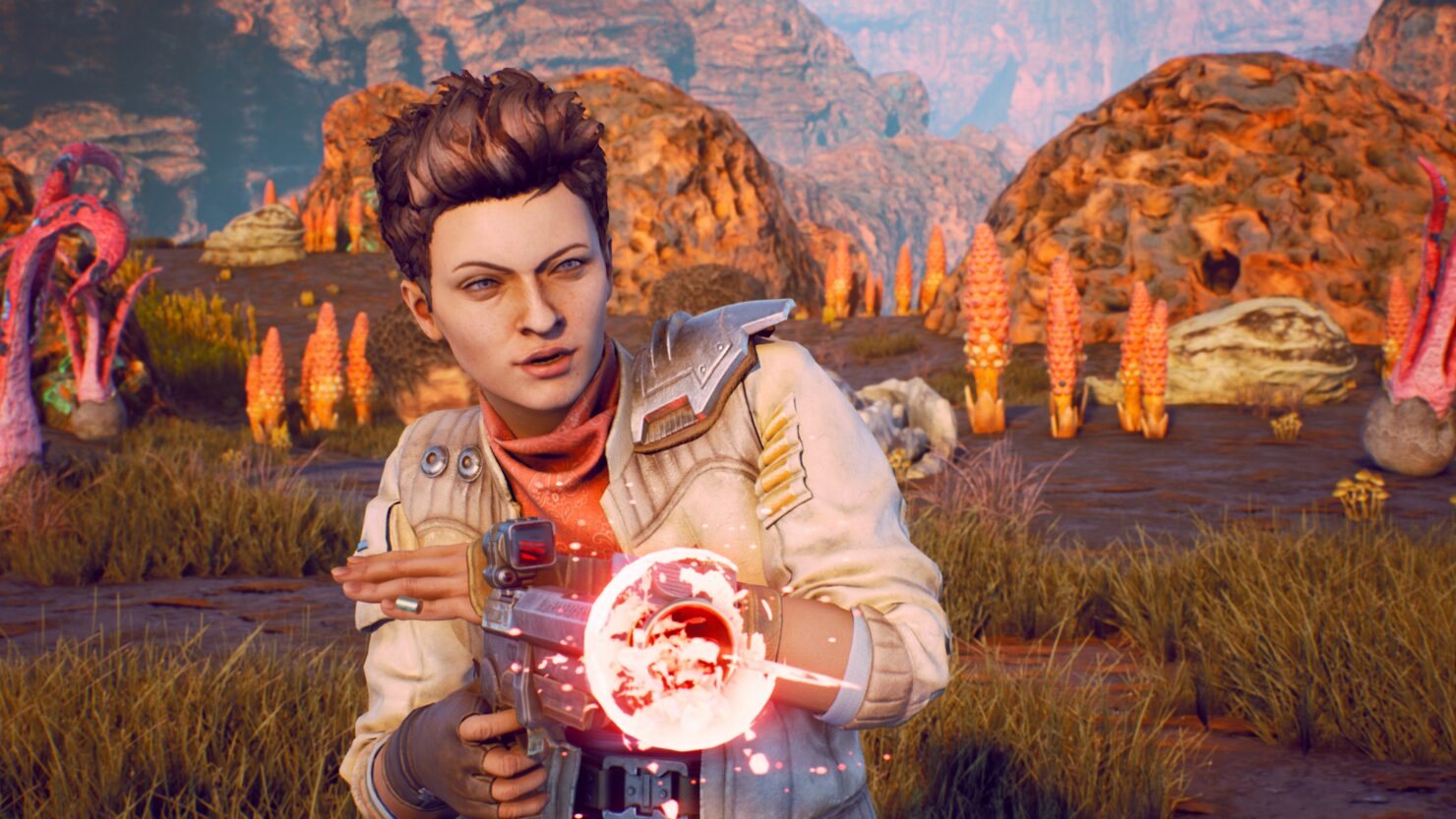 The Outer Worlds made a huge splash when it was unveiled, particularly among disgruntled Fallout fans. It marks Obsidian's return to triple-A, third-person action RPGs after a few years of isometric cRPGs like Pillars of Eternity and its sequel as well as Tyranny.

At E3 2019 we got to look at a behind-closed-doors presentation for the press, which easily won us over (we did, after all, award The Outer Worlds with our Best RPG and Best New IP prizes). You can now watch a portion of the presentation in the video embedded below.

Simply put, it looks as deep as an RPG can be, with a veritable plethora of choices available to customize your character on every level as well as his/her story through different options in dialogue, combat, et cetera. The dark comedic tone also sets The Outer Worlds apart from other roleplaying games and made us all the more eager to explore these alien planets and their inhabitants.

After the presentation, we had the pleasure of talking to Megan Starks, a Senior Narrative Designer at Obsidian who has already worked on Pillars of Eternity II: Deadfire and Tyranny. Check out the full transcript of our conversation below.

As a reminder, The Outer Worlds will release on October 25th for PC, PlayStation 4 and Xbox One. The PC version will be a timed exclusive of the Epic Games Store for about a year, but thanks to Microsoft (which acquired Obsidian in late 2018) you'll also get the chance to buy it on the Microsoft Store, in which case the game will be playable on both Xbox One and Windows 10 PC with cross-progression through Xbox Play Anywhere. Additionally, the game will be included with the Xbox Game Pass subscription at launch.

A lot of people have been comparing The Outer Worlds to Fallout New Vegas. How do you feel about that?

I think the team is pretty happy with that comparison. It's hard to get away from it because this IP is a brand new IP and it is created by the same people who created Fallout. And then also the studio is known for making Fallout New Vegas and a lot of the team who made Fallout New Vegas have been working on The Outer Worlds. And then on top of that, you have developers like me, who are just fans of that game. So yeah, I think we're trying to do a classic Obsidian style RPG, single player, with a really rich story and choice driven. And then we bring that dark, quirky sense of humor to it.

How many corporations are there in total in The Outer Worlds?

I believe there are 10 corporations on the Board, but there are many more factions you can encounter in the game.

A big, overarching theme in The Outer Worlds is that corporations control people in a bad way. But I was wondering, is there any corporation that's perhaps a bit less evil than the others?

I think you will encounter different types of corporations in the game. So you'll see different shades of grey and can kind of decide which ones you want to side with or not.

Okay. So you can even work with some of the corporations in the game?

Yes, you can. We do have different choices that we want to provide in the game, from the highest level down to the smallest. The Board built the system, they went ahead to colonize space. Then they made the Halcyon colony, and, you know, proceeded with terraforming the planets and set up shop. You were actually on one of the original colony ships, but it disappeared mysteriously seventy years ago. This scientist finds you and wakes you up, so you're no longer frozen. He wants you to help him save the system from a problem that I don't want to spoil before you play the game, but you can side with him or side with the board and further their agenda instead. Or you can choose neither of them and kind of go your own path. Beyond that, every time you go to a different region in the game, we have storylines with competing factors there. You can learn the storylines of different towns and different planets. And what or who you want to support or side with there. And then on the smallest level, as you saw in the demo, every time you're doing a quest or talking to different NPCs we want to provide you with choices. How do you want to play through it? Do you want to do stealth? Do you want to do combat, do you want to do dialogue? Are you interested in hacking? Do you want to be a scientist and use science weapons? So we're always trying to allow you the most choices possible to play the game the way you want and role play it as the type of character you want to be. And then tracking all of that and reacting to it and having the world change based on your choices as you go through the game.

As a writer, is it tough to keep up with all this reactivity, multiple dialogue options, and different potential outcomes?

I think it can be a lot to juggle. But luckily, a lot of us have experience with it. This is the third one that I've done for Obsidian. With each game you kind of get better at, you know, being like, oh, I need to check for this, I need to consider that. And we do have massive conversations, what the player actually sees in the game is a very small amount of the conversations that we build usually, because what you're experiencing is all based off of the route you want to go through the conversation. And then also, based off of previous choices you've made, how those characters are reacting to you. So if you had made different choices, you'd be seeing different stuff in the conversation.

Are there different endings in The Outer Worlds? If so, can you reveal the number of those that significantly differ from one another?

I don't think we're going to say a number, but indeed, there are different endings based on your choices.

There's one other thing I've been wondering. I know the player can wreak havoc on the planets, right? If you want to be a psychopath, you can. But what if you went on a killing spree, murdering a lot of people on one planet, then you left the planet and subsequently went back to it at a later time? Will the survivors attack you on sight or remember what you did before anyway?

Okay. How's the character creation tool going to be?

We're not going into detail about character creation right now. But I mean, it's pretty...if you liked previous Obsidian games for it, I don't think you'll be disappointed anyway. By the way, since you've asked some systems questions, we do have a Supernova mode. The game has different difficulties, basically what you would expect, like Normal, Hard, et cetera. We also have the Story mode, which is for people who really don't want to deal with combat and just want to experience the story. And then we also have Supernova, which is our hardest difficulty mode. You do have permadeath there with your companions. And there are some restrictions, I think you have to go back to your ship to use consumables. And then also, if you're offered a flaw, you have to take it. Everything in the game is checking what's going on, and reacting to it.

In one of my playthroughs, I wanted to check out the dumb dialogue. But when I was in character creation I forgot to lower my intelligence stat and then I was like, oh, I forgot to make myself dumb. But I took so much damage to my head that they offered me a permanent concussion flaw, which made me a dumb character. So I took the flaw, and immediately got a perk point, which was really nice. But in our normal modes, you don't have to accept flaws. They're totally optional. But in Supernova mode, I think you have to take any that comes up, and you can get more of them. They can stack in really interesting ways. So for example, if you have a fear of like heights and the dark and robots and then you're fighting robots on a cliffside at night, it can get pretty challenging for you.

Awesome. I've read the companions can leave your side if they dislike your choices. Can they also attack you, though?

I believe so. I believe I've seen it. I mean, some of the stuff is like, we keep updating things based off of player feedback. And right now, we're in our polish phase, but yeah, I'm pretty sure. If you fail, if the companion gets angry at you and you fail the check, yeah.

We said that we were looking at romances potentially for maybe a sequel because it takes a lot of resources and time to do really well. And we wanted to build a really solid foundation for the game and this one, yeah. But we do know that it's something that people are interested in and we definitely want to explore in the future.

Great. Thank you for your time!

The Outer Worlds: Peril on Gorgon DLC Review – More of the Same