PlayStation 5 Tech Details Inbound for Tomorrow; Initially Planned to be Presented at GDC 2020

Following yesterday's Xbox Series X info blowout, and after months of waiting, Sony has now confirmed that PlayStation Lead architect Mark Cerny will provide a deep-dive into the system architecture of the PlayStation 5, and how it will shape the future of games. The broadcast can be watched on the official PlayStation Blog at 9am PT.

Interestingly, as mentioned in a now deleted tweet from the official PlayStation Japan twitter account, this deep-dive was initially planned to be presented at this week's GDC. As we all know, GDC 2020 was canceled due to fear over COVID-19. Luckily, we screenshotted the tweet from PlayStation Japan: 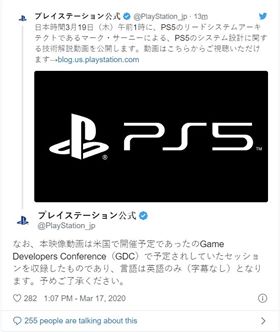 Sony officially unveiled the PS5 logo back in January of this year during CES 2020. Last year, PlayStation's Mark Cerny already talked about Sony's next-gen and what to expect from it. In October of last year, Cerny provided additional details about the console, including its next-gen SSD, haptics tech, improved UI and more.

Like the Xbox Series X, the PlayStation 5 is planned to be releasing by the end of this year. Recent reports have suggested, however, that both consoles might be delayed due to supply chain issues caused by Coronavirus. According to the report from the DFC, even if the current economic situation improves in the coming period, the consoles will likely be delayed.

"Currently, the economy is in an unprecedented state of uncertainty", the DFC wrote. "Even if the situation clears up in a few weeks, the ability to manufacture and release a high-end new game system has already been severely impacted."

On the other hand - industry analyst Daniel Ahmad said that, with production in China ramping up again, there's currently no reason to believe that the next-gen consoles won't make their Holiday 2020 launches.

As always, we will keep you updated with all the PlayStation 5 news.