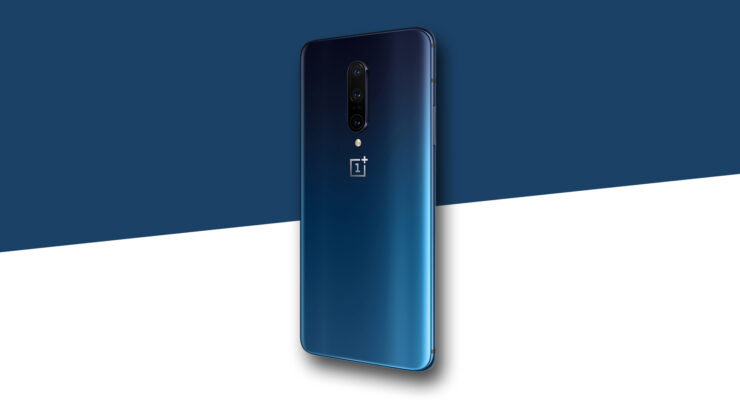 With the OnePlus 7 Pro and OnePlus 7 already announced, the general opinion was that the company wouldn’t launch any more devices this year as these models already cater to two varied pricing brackets. However, there’s a possibility a OnePlus 7T Pro unveiling might be lurking in the corner as the device has allegedly been pictured in a protective shell. Unfortunately, the cosmetic changes differentiating the OnePlus 7 Pro and OnePlus 7T Pro might only be transparent when you compare the internal specifications.

On Weibo, a trio of images have been shared revealing what could be the OnePlus 7T Pro wrapped in a protective case. The reason for strapping a protective case around the device is most probably to protect its design so that prying eyes don’t focus on the important details. At the back, there is a small, but negligible difference in the camera module spacing. If you look carefully enough, you might be able to spot it.

There is a small gap between the middle camera lens and the third one at the bottom, but we’re not sure what it might indicate here. Perhaps the biggest cosmetic change to OnePlus’ ‘T’ series arrived was when the OnePlus 6T launched. It came with a teardrop notch instead of a regular notch on the OnePlus 6, offered a slightly bigger display, larger battery, but disappointingly, the removal of the 3.5mm audio jack was initiated, and no wireless charging support.

With the OnePlus 7T Pro, we could see a slightly bigger battery and an improved camera system. We don’t believe OnePlus will increase the display size of this variant, because let us face it, the 6.67-inch screen of the 7 Pro is already massive by 2019’s standards. However, one major change that could separate the OnePlus 7 Pro and OnePlus 7T Pro in terms of hardware is the Snapdragon 855 Plus.

Like always, we recommend that you wait for more updates in the future to confirm the veracity of this leak, and hopefully, we’ll be treated to a OnePlus 7T Pro before 2019 ends.