Now that the E3 madness is over, it's time to start analyzing what went down with a little more depth. According to Facebook data reported by Venturebeat, Sony won the E3 conference war on Zuckerberg's platform.

However, there's a lot more to social media than just Facebook. Luckily, Brandwatch shared the data collected by their "social intelligence platform" and we can now paint a more accurate picture. 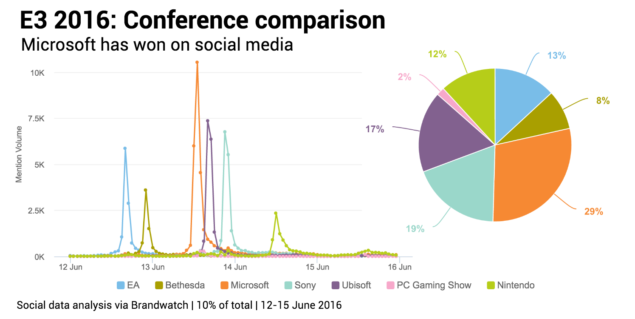 The data, collected by Brandwatch between June 12 and June 15, shows a clear winner: Microsoft's conference got 29% of the mentions volume, 10% more than Sony's. The other console hardware manufacturer (Nintendo) stopped at a mere 12%, though admittedly the Treehouse live stream was not quite a full blown press conference.

Among the remaining conferences, Ubisoft triumphed with 17% of social mentions, while EA got 13% and Bethesda 8%. The PC Gaming Show only got 2% of mentions, unsurprisingly.

Brandwatch also analyzed social mentions for all the games showcased at the conferences, though. Let's start with Electronic Arts, since that was the first one. 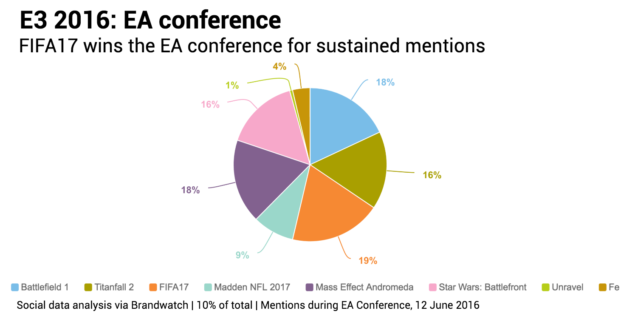 FIFA 17 won with 19% of mentions, though again that's hardly a surprise given how popular the franchise is across all platforms. Mass Effect: Andromeda's first look video, even if brief, granted Bioware's title a solid second place at 18% tied with DICE's Battlefield 1. Titanfall 2 and Star Wars Battlefront both stopped at 16%.

Let's move over to Bethesda. 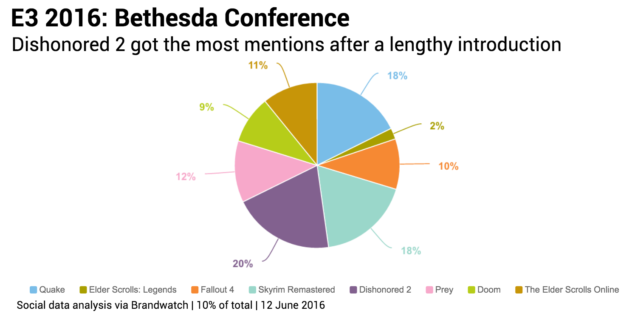 Dishonored 2, which got its first gameplay demonstration at E3 2016, won with 20% of the total. Quake Champions secured the second place with 18%, tied with Skyrim Remastered, while the new Prey game by Arkane stopped at 12%.

Microsoft's pie shows a very tight split, on the other hand. 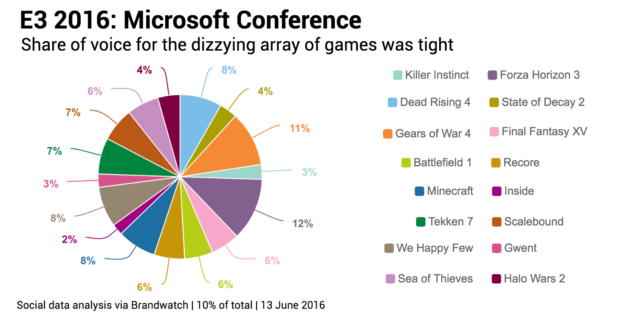 With so many games announced or talked about, the percentages were very close. Forza Horizon 3  and Gears of War 4, both announced for Windows 10 PC at the conference, got the most mentions with 12% and 11% respectively. Dead Rising 4, Minecraft and indie game We Happy Few all tied at 8%. 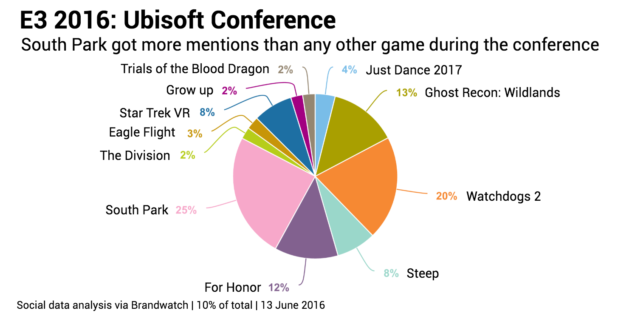 South Park: The Fractured but Whole received 25% of the mentions for this conference, with Watch_Dogs 2 getting 20%, Ghost Recon: Wildlands 13% and For Honor 12%. Ubisoft's new online open world sports game, Steep, only got 8% of the mentions.

The final one (there's no need to take a look at the split for the Treehouse live stream as Zelda was the star of that show) was Sony's. 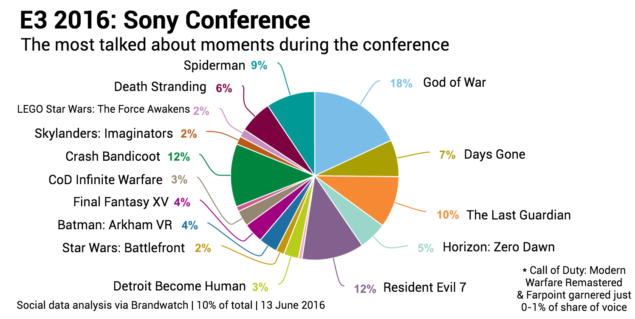 As you already know if you watched it live, this was a conference filled with big games and franchises (though many of them are still far from release). The stunning God of War gameplay demo won the day with 18% of mentions, while Resident Evil 7 and the Crash Bandicoot remasters stopped at 12%. The Last Guardian, which received its release date trailer, got 10% of mentions while Insomniac's Spider-Man surprise received 9%. 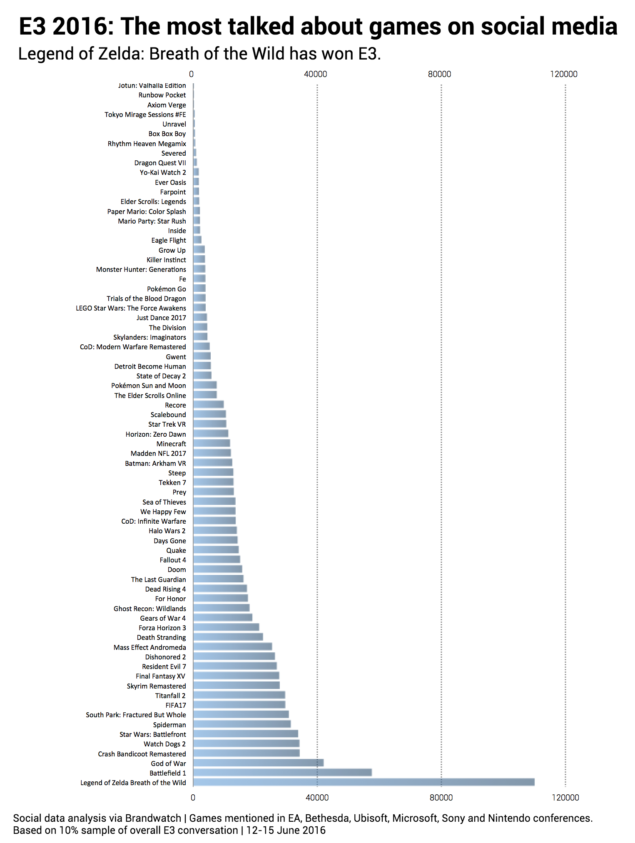 Finally, Brandwatch also shared a combined split for all the games showcased at the E3 2016 conferences. Nintendo's Legend of Zelda: Breath of the Wild dwarfed every competitor, getting roughly twice as many mentions as Battlefield 1. Again, this won't be a surprise to the keen observer as Zelda is one of the biggest game franchises of all time and this installment has been a long time coming. The third place belongs to God of War, while Crash Bandicoot Remastered, Watch_Dogs 2 and Star Wars Battlefront received a similar amount of social mentions.

The top 10 is completed by Spider-Man, South Park: The Fractured but Whole, FIFA 17 and Titanfall 2. Do you agree with these results? Let us know in the comments!

Arkane’s Prey Gameplay & Exclusive Look at Zelda: Breath of the Wild at The Game Awards 2016