Bandai Namco brought a diverse, yet familiar lineup to this year’s E3 conference. Gone are the Dark Souls kiosks of recent years, instead replaced with a wall of Tekken 7 demos and other upcoming titles. While Bandai Namco offered a wide range of titles to be explored this year, I instead opted to focus my time onto two titles that I am personally excited for: Tekken 7: Fated Retribution (Xbox One) and Tales of Berseria (Playstation 4).

Tekken 7: Fated Retribution marks the series’ triumphant return to the fighting game main stage. While it has been presented at the Evolution World Finals (EVO) as early as last year, this year’s E3 has been the first time that I’ve personally been able to get a controller in my hands to play. As someone that’s spent the better half of ten years utilizing an arcade stick for nearly anything that wasn’t developed by NetherRealm, it was a bit jarring to play a fighting game on the Xbox One controller. That D-pad, while serviceable, would not be my future go-to for fighting games.

Fated Retribution was a bit of a flashy marvel with its reveal earlier in the week at Microsoft’s press conference Monday morning and that style certainly matched what was playable in a private demo. The dynamic showdown between Heihachi and Akuma was certainly an impressive showpiece during the E3 trailer and even more so once it was demonstrated in game. Tekken 7’s story mode seamlessly blended CGI scenes into in-game fights, giving a certain flourish far above and beyond what I had come to expect from the fighting game genre.

Akuma, of Street Fighter fame, is not only a crossover member of the roster but also integral to the story of Fated Retribution. He’s given such thorough treatment in the Tekken universe and style of gameplay that I couldn’t believe he hadn’t been there in the roster all along fighting alongside Kazuya. His moveset felt largely similar to that of his Street Fighter IV version with some liberties thrown in to adjust for a 3D engine versus 2D. Inputting commands for his attacks take quarter-circle inputs just as they would in Street Fighter, although getting them to go off wouldn’t always work as intended. Akuma’s Tatsumaki, or hurricane kick, would go off without a problem when I needed it to and worked great for applying pressure, but routinely I would fail an input for his Shoryuken; perhaps this was user error and I needed to be more deliberate in my directional inputs.

Finally getting hands-on with Tekken 7 was one of my most exciting moments of E3 2016 and I can’t wait to get my hands on it again soon. That wait might not be long at all, if all goes well and I’m able to make my way out to EVO 2016 (taking place in Las Vegas this July 15-17th). Tekken 7: Fated Retribution will launch in Q1 2017 for PC (marking the series debut on this platform), PlayStation 4 and Xbox One; cross-platform play hasn't been completely ruled out by the development team. 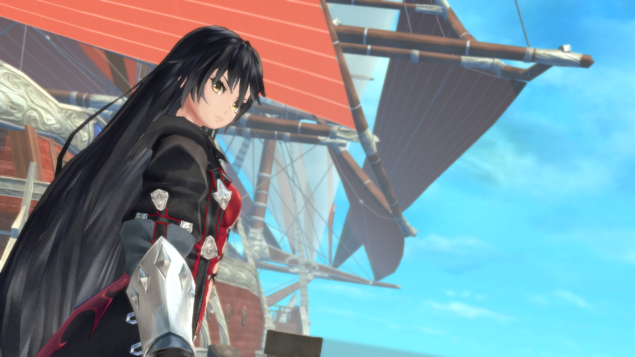 The second title from our appointment with Bandai Namco was Tales of Berseria, an upcoming role-playing game so fresh that it still has another two months before the Japanese release. Tales of Berseria is the tale of Velvet Crowe, a young pirate that has the honor of being the series’ first solo female protagonist (Xillia offered the choice between two different leads). The hands-on demo focused on a tutorial before sending me off onto an inland beach area to venture as I pleased.

While the game itself was wholly in Japanese, my familiarity with the series immediately drew on accustomed tropes of the series. Just about every established key activity of the Tales of.. Series was present front and center in this short hands-on demonstration. Overworld map with enemies you can run into or away from? Check. Customizable artes and skills? Check. Grade points? Check. Skits? Double check.

Tales of Berseria’s combat system quickly proved their most fluid and dynamic system to date. The LMBS, or Linear Motion Battle System, once again returns for combat with some new additions for moving freely around the battlefield and even rotating the camera around the action. All four of the PS4 controller’s face buttons could be assigned with a number of different attacks (up to twenty from what I could see, if the melee character had enough combat artes) and customized freely into combos by dialing in the buttons in different orders.

A new Soul Gauge mechanic prevented me from spamming attacks without any delay. These five blue gems that appeared beside my character’s portrait indicated those consumable gems. I could still attack once the Soul Gauge was depleted, although with greatly reduced efficiency and damage. Once it was full, the heroine Velvet Crowe activated a new ability called Break Soul that caused her arm to explode into something reminiscent of Ragna the Bloodedge from Blazblue. It seems each character would have their own ability, although I wasn’t able to see which other party members could do the same.

Bandai Namco seems to be going back to the basics with the Grade Shop. At first glance, winning a battle nets the player grade based on their efficiency and actions, the standard system that I prefer more to some of the more gimmicky styles.

There was a link system present that joined two party members together. Neither my limited Japanese understanding nor the guide showing me the demo could discern exactly what these mechanics were, so this is one mystery I’ll have to look into more closely once the final release approaches.

With the Japanese release of Tales of Berseria coming in just a few short months, it’s a relief to hear that the North American and European releases are not far behind. Tales of Berseria will be launched in other territories as soon as ‘Early 2017’ on both PlayStation 4 and PC.