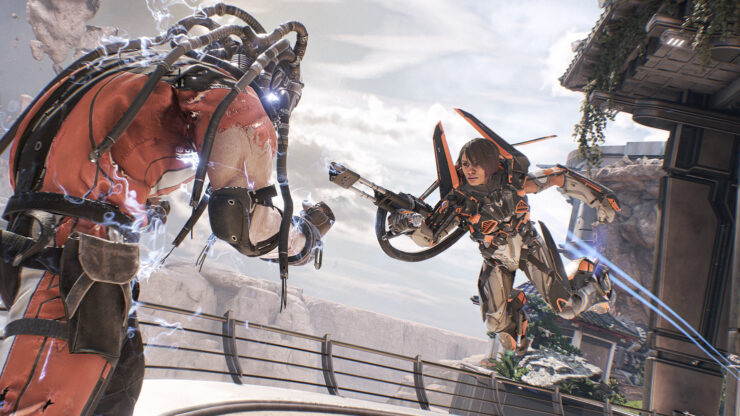 When I first stepped into the Nexon meeting room, having never seen gameplay of LawBreakers in person, I arrived with two misconceptions of the title. One, that the action would hopefully on par with that of Unreal Tournament and two, the grappling hook from Bulletstorm would make a grand reappearance in a competitive shooter. Sadly, I couldn’t quite find either of these ideas to be true. Cliff Bleszisnki and his crew came close to both, but my experience with LawBreakers still left something to be desired.

During my time with LawBreakers, I played a few matches of the newly unveiled Turf War mode. As a hybrid between King of the Hill and your standard Team Deathmatch, this mode had both teams facing off for control of one of three various points on the map Promenade, another new addition that was said to be based off a famous Santa Monica landmark. If both teams were on the top of their game, rounds reset in a spectacularly quick fashion and the first to secure 13 points would be declared the winner, although none of my matches got to the "overtime".

Each of the four classes in the current build of LawBreakers had their own feel when it came to both mobility and shooting. Of the classes available, I gravitated most naturally to the Vanguard, the most aerial of the four with a jetpack and the second-lowest health of the crew. The Vanguard’s primary weapon of choice was a gatling gun, something I’m fond of in most any shooter as a more defensive loadout. With such a huge focus on offense, I certainly wouldn’t be able to back myself into a corner and unload every bullet in some defensive measure.

Wielding only a fifty-round clip at my disposal, I’d routinely firing at airborne targets, trying to lead my shots and emptying all fifty rounds at a single target only to see them live through the attack. This occurred at any range, whether it was up close where an Assassin-type would kill me first, medium range, or from across one of the open spaces in the map where plenty of distance was left between us. The ‘time-to-kill’ metric felt unusually skewed to where my Vanguard would take too long to take out a single enemy with her primary weapon; couple that with a seemingly low amount of bullets to her “Hydra” gatling cannon made it difficult to reliably take out members of the enemy team, especially when the firefights were taken up above the playing field. 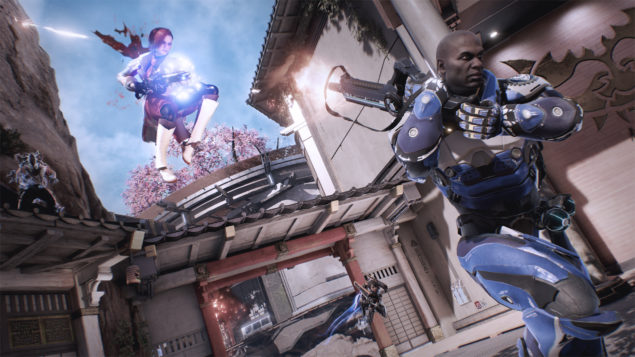 There were times that LawBreakers aimed to be a faster experience, yet missed the mark by a wide margin. The moments when both teams converged together on a single capture point during those crucial last few moments of the round were easily the high points of my experience with LawBreakers. When both teams clash against one another, dominating each other from the ground, air, or those zero-gravity pockets on the map, there’s a frantic charm to the action. However, the further you got away from these lower-gravity points, the more the action slowed down and I couldn’t help but feel like there was something not quite clicking with the grounded firefights.

Those times when I saw an untimely demise through the enemy team’s superior tactics, forced to respawn back at the main base and perform a walk of shame to get back into the action. These fifteen-plus second runs immediately pulled me out of the action and ruined the tension that had been built up from the previous firefights. I felt like the standard movement speed was a bit too slow compared to the other pace of action and I would find myself hitting the Vanguard’s special Afterburner ability to race back to whichever points were being contested, only to find myself without any fuel and locked out of half of her unique abilities until her fuel pool could recharge.

CliffyB and the team at Boss Key have set up the framework for a decent competitive shooter that feels like a slower Unreal Tournament matched with the diverse character classes of Blizzard’s recently released Overwatch. Though the speed could most certainly use a tweak, some of the newer conventions can help give new life to the arena shooter genre if Boss Key can fully realize their potential.