Thanks to an earlier look at the iPhone SE 2 renders provided by OnLeaks, it’s pretty clear that the upcoming model will bear a striking resemblance to the iPhone 8. In lots of ways, that’s a terrific thing for a lot of customers, as a phone reaching the masses in 2020 from Apple should be impressive in the hardware department. Well, a new gallery of renders not only shows some potential color options and design, but the expected iPhone SE 2 specs are also visible here.

Svetapple have introduced some interesting iPhone SE 2 renders including a beautiful white finish that you can check out below. Since the iPhone SE 2 design is based on the iPhone 8, it’s highly unlikely you’ll be able to make out the cosmetic differences between the two models. However, as we’ve mentioned before, it’s not the design that’s going to be primary selling-point, it’s the innards. As far as the iPhone SE 2 specs go, Svetapple was kind enough to highlight what could be part of the upcoming model. 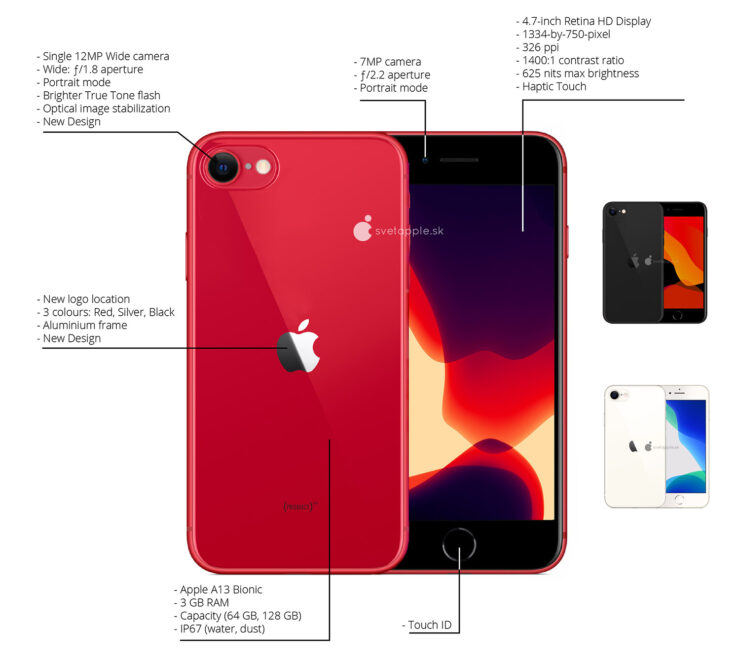 However, it should be noted that these aren’t the final specifications and they might change when Apple is officially rumored to launch the iPhone SE 2 by the end of the March this year. The lowered resolution will mean users can experience better battery life, and the A13 Bionic that’s reported to fuel the iPhone SE 2 should also contribute greatly in this category.

Another primary change to the iPhone SE 2 specs is the rear camera. Unlike the original iPhone SE launched back in 2016, the successor could feature hardware stabilization, while the front shooter could provide a ‘Portrait Mode’. While Touch ID is expected to make a return, we don’t think 3D Touch will be retained for the iPhone SE 2.

As for the price tag, Ming-Chi Kuo earlier stated that the base storage of 64GB may retail for $399, making it one of the most competitively-priced products Apple has launched in a long time. Of course, it may not have the most attractive of designs, but the iPhone SE 2 specs and pricing could definitely be a game-changer in the market.