Microsoft's Surface takes pleasure in its distinctive and true multitasking with the ability of working on two apps simultaneously. Apple's iPad had long been condoned for its inability of having a desktop-level of multitasking. Considering tablets have larger screen real estate, consumers certainly look forward to having the option of working on multiple things at a time. Seems like, Apple is finally going with iOS 8 multitasking when it's launched in fall this year. 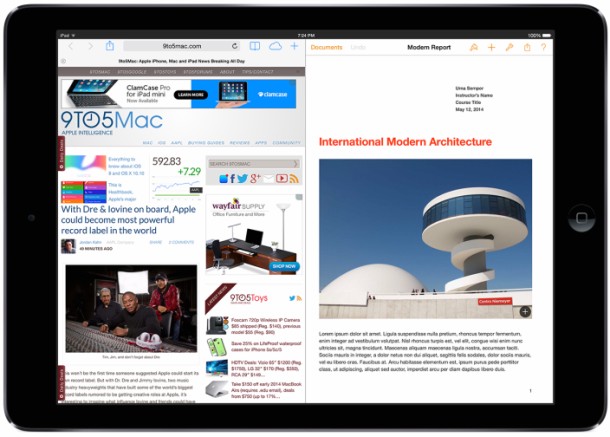 While the iPad can only show a single app screen at a time, developer Steve Troughton-Smith has found out that the iOS 8 code supports resizing apps. By resizing app, it is meant that a single app can take up full screen (which is what happens currently), three-quarters of the screen, one-half, or the one-quarter of the screen. Developer has also shared a demo video to show how this resizing works on iPad.

Earlier in the year, it was reported by 9to5mac that Apple will introduce split-screen iOS 8 multitasking. However, it did warn that it might not be shipped with iOS 8 but can be introduced later on. iOS 8 code contains the capability of split-screen resizing, but so far it doesn't contain the feature in its entirety.

If you notice in the video too, the demo on simulator doesn't look very pleasant. Developer only means to show how exactly the resizing works and by the looks of stretching it to a quarter of the screen, we might just be able to work on four app simultaneously! Troughton-Smith suggests that the simulation he did works only in landscape and not in the portrait mode.

While the highly sought-after feature wasn't showcased at WWDC event which showed off iOS 8, it is highly possible that Apple might introduce it with the next iteration of iPad Air and iPad Mini later this year. Rumors also suggest that Apple is considering to introduce a larger 12-inch iPad Pro sometime next year, which further confirms the increased focus on iOS 8 multitasking capabilities pushed by Apple.